After our mini vacation to St. Vincent and the Grenadines, we checked out of the country at Union Island and sailed back South to Carriacou.

Our friends Mike and Rebecca on One Love were making the same passage so we snagged a few photos as they passed us. 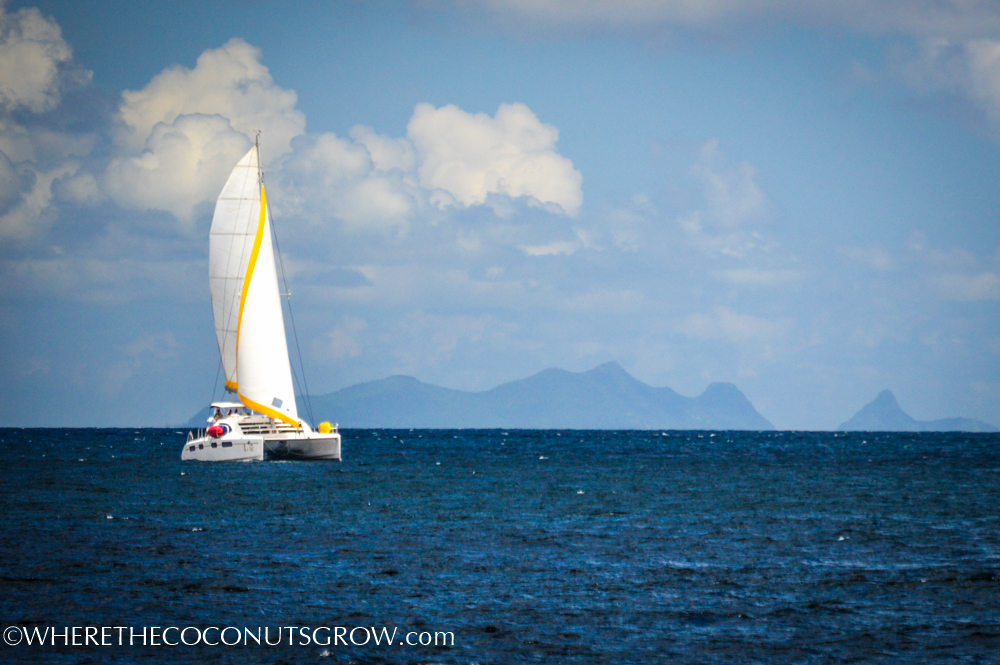 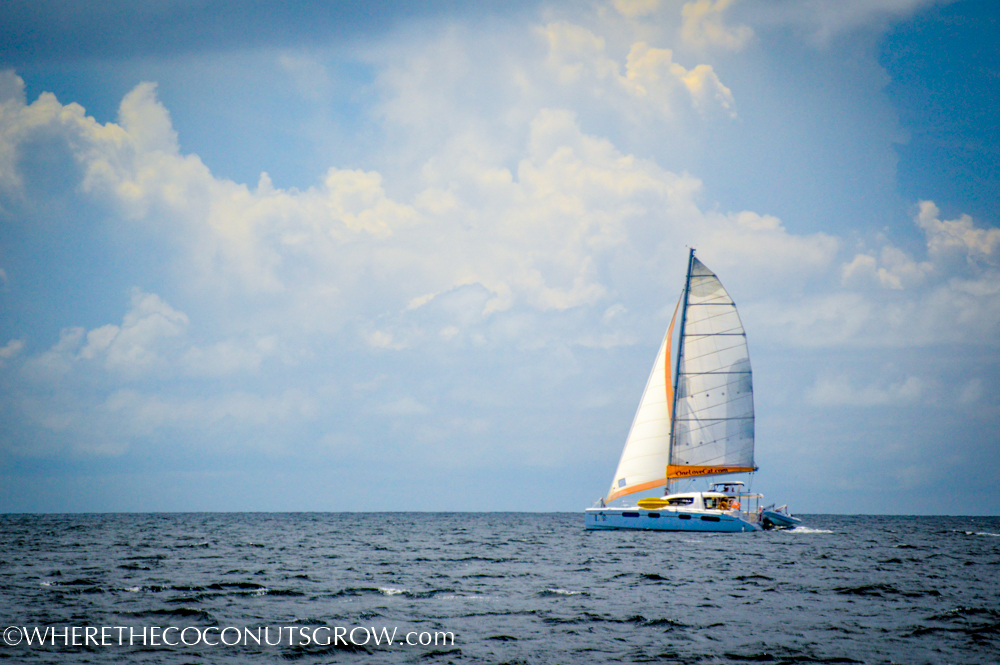 Somewhere along the way, Peter decided to check the fishing lines. We had two out and there is usually Sargassum weed tangled around the lures. It seems to be everywhere between the Caribbean Islands, making trolling for fish a real chore.

Just as he was bringing in the cedar plug, he got a bite not more than 10 feet from the boat and the fish took off! I leaped up to slow the boat down and bring in the other line while Peter reeled his in. Just then, we both saw it jump. He had hooked a gorgeous Sailfish! Sailfish are “highly prized game fish, and are known for their incredible jumps and great speed. They can swim 100 m in 4.8 sec.” END_OF_DOCUMENT_TOKEN_TO_BE_REPLACED 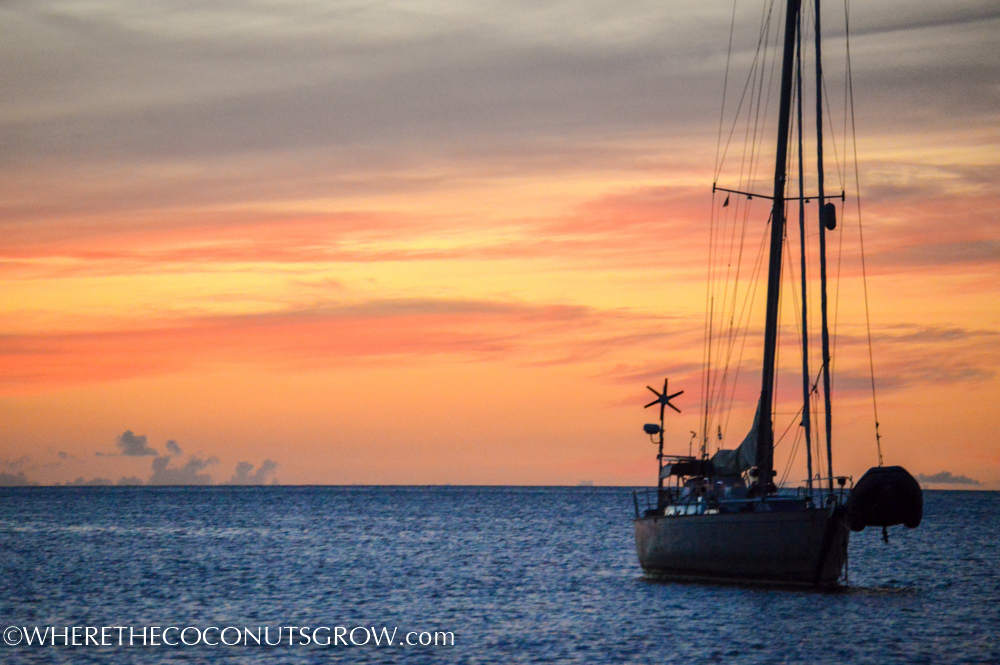 The morning of July 18th Peter and I had almost made it to Carriacou, one of the three main islands that make up the Country of Grenada. It was a gorgeous sail and our night passage had gone smoothly. We approached the Northern coast of Carriacou just as a dark and ominous group of clouds were quickly building over the center of the island.

Within minutes we could see a wall of rain cover the island pushing West toward the entrance to our charted anchorage, Tyrell Bay. This was our first time entering this anchorage and the comments on Active Captain already had our nerves on edge about the exact course to take when entering to avoid the reefs. We were prepared for careful navigation around the hazards described on the charts but we were not prepared for what happened next…

We were already approaching the coast and our course was plotted to go between The Sisters rocks and Carriacou for a left turn into Tyrell Bay. We had a gap of about 1 nautical mile to safely cross through.

With heavy rains approaching like a Tsunami, Peter and I raced to get the big 135% Genoa furled in. We didn’t have time to close up the isinglass surrounding our cockpit AND get both sails down. Our Mizzen sail was just going to remain up. It’s all we could do.

Just then, a crazy gust ripped off the hills of Carriacou and barreled at us in what was now a very angry squall. We watched with frightened eyes as the wind gauge clocked 45+ knots of sustained wind and practically knocked us down on the starboard side. Our rail was in the water and I was hanging on from a vertical perch on the port side while keeping a watchful eye on the confused dogs. It was a moment I felt very grateful for a fully enclosed cockpit!

Still a little shaken up from the last nightmare squall and ferry incident in St. Kitts, it was instinct to immediately turn the engine on and restart the chartplotter as quickly as possible. We flipped through the touchscreen dialog and raced to get the radar turned on. Unfortunately the rain was so heavy it blocked all radar signatures of land even with the gain set to minimum. We could only rely on the GPS readings on the chartplotter to guide ourselves away from The Sisters.

The Mizzen sail immediately wanted to point us up wind toward Carriacou but the rain was so heavy we could only see less than two boat lengths in all directions. The wind and currents were not providing safe conditions to allow the boat to point to wind or heave-to since we were exactly between The Sisters rocks and Carriacou by then. We were SOO close from our destination, yet it felt so far away.

With the rudder pinned hard right and the wind trying to turn us back left, we were pushed a total of 4 miles off shore GOING SIDEWAYS at a whopping 7 knots!! The bad news was that we were being carried nearly as fast as the squall was moving so it really wasn’t passing over us. The good news was that as long as we were clear of The Sisters, it was okay that we were headed out to sea; a much safer place than near invisible land masses and treacherous rock formations.

A least an hour passed before it wasn’t ‘too dangerous’ for Peter to go out on deck and drop the Mizzen so we could motor back on course. Weakened from the adrenaline rush, we motored straight for Tyrell Bay and dropped the hook in the back of the anchorage, made sure it was set well, took the dogs potty on deck and then got some much needed rest.

Later in the afternoon Peter went to shore to check us in before we treated ourselves to some snorkeling at the nearby Saline Island with our friends Susan and LA on Genesis. (Thanks Susan for the photos!!) 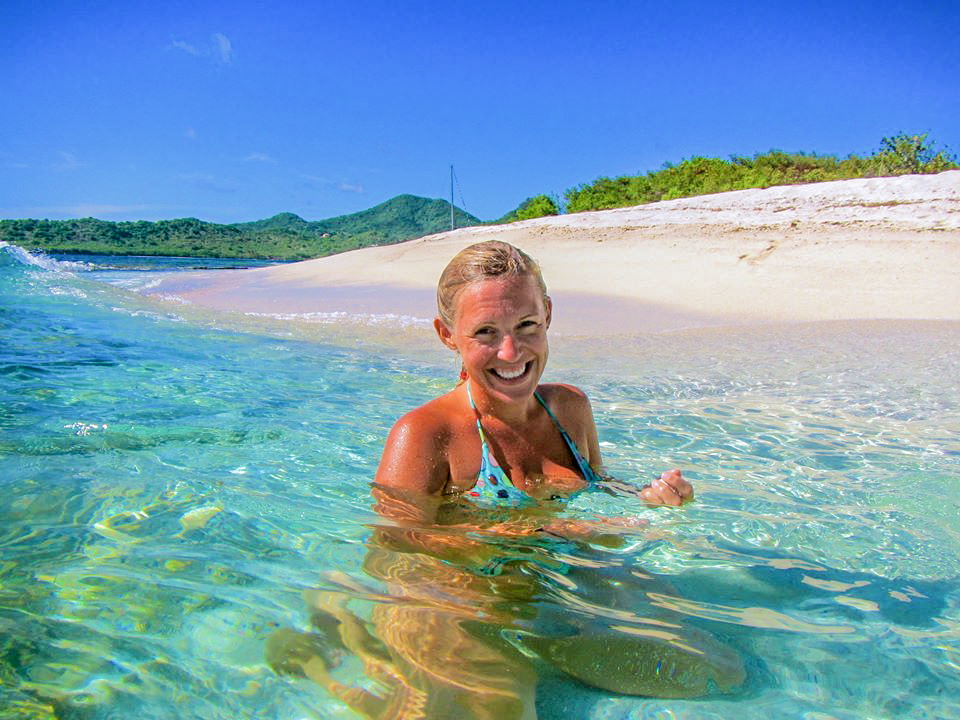 We saw a nurse shark hiding under the coral… 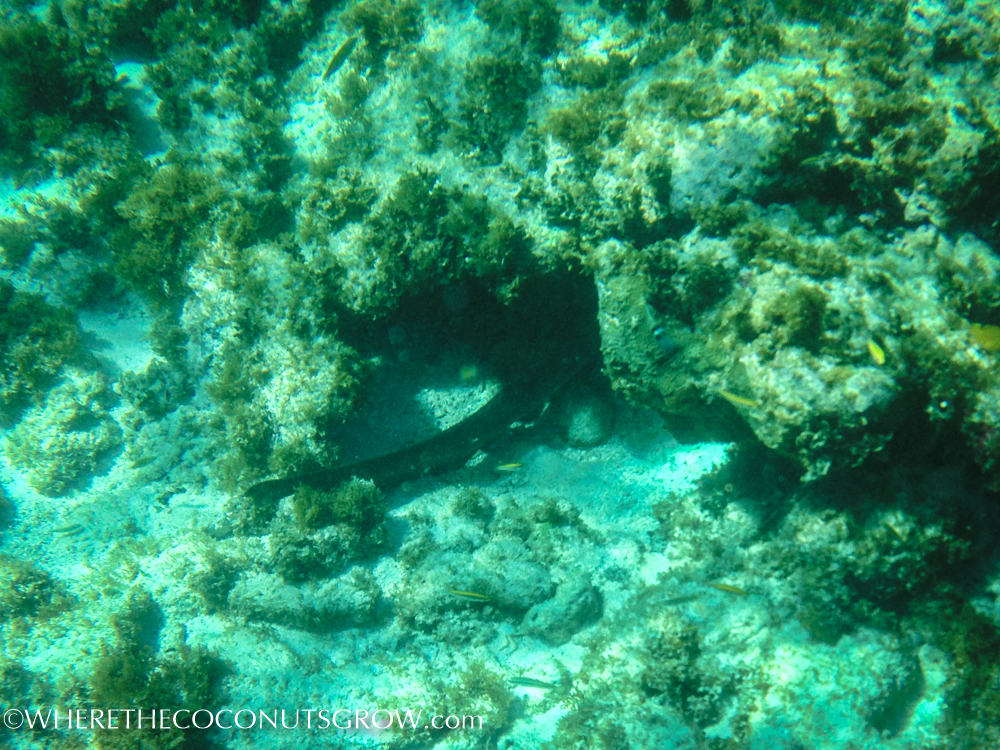 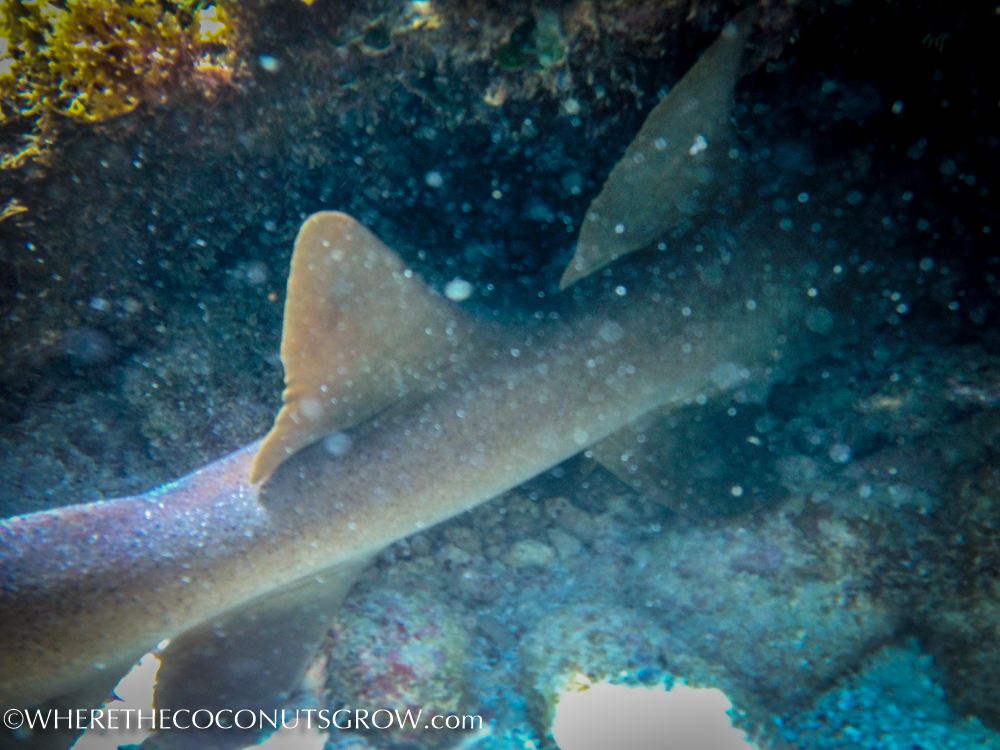 And lobster and fishies… 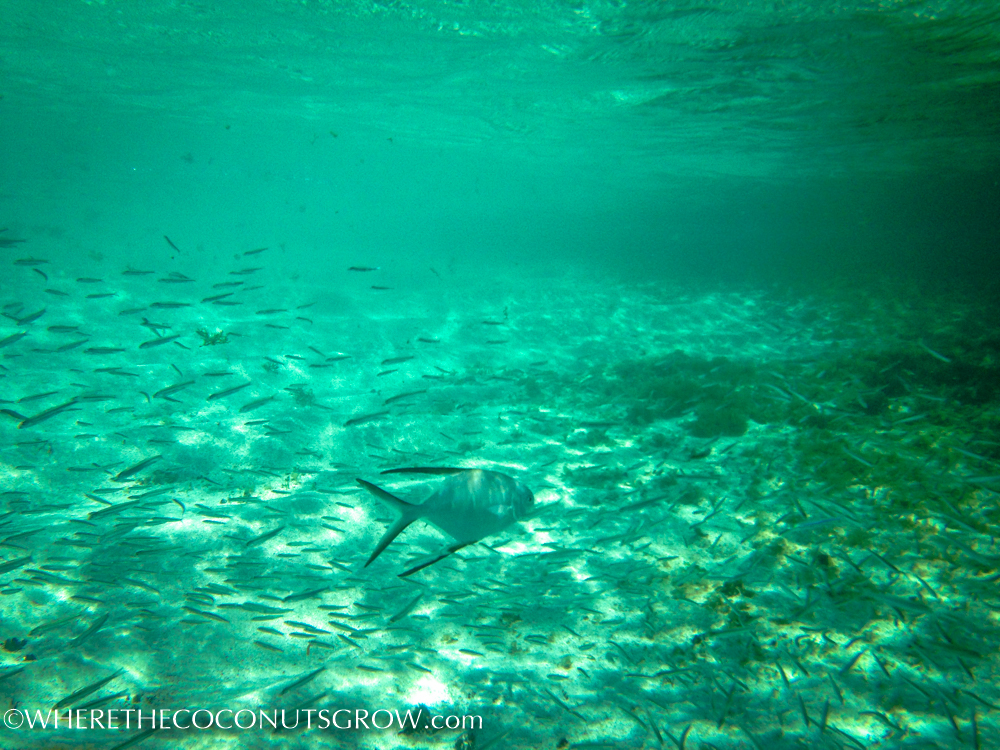 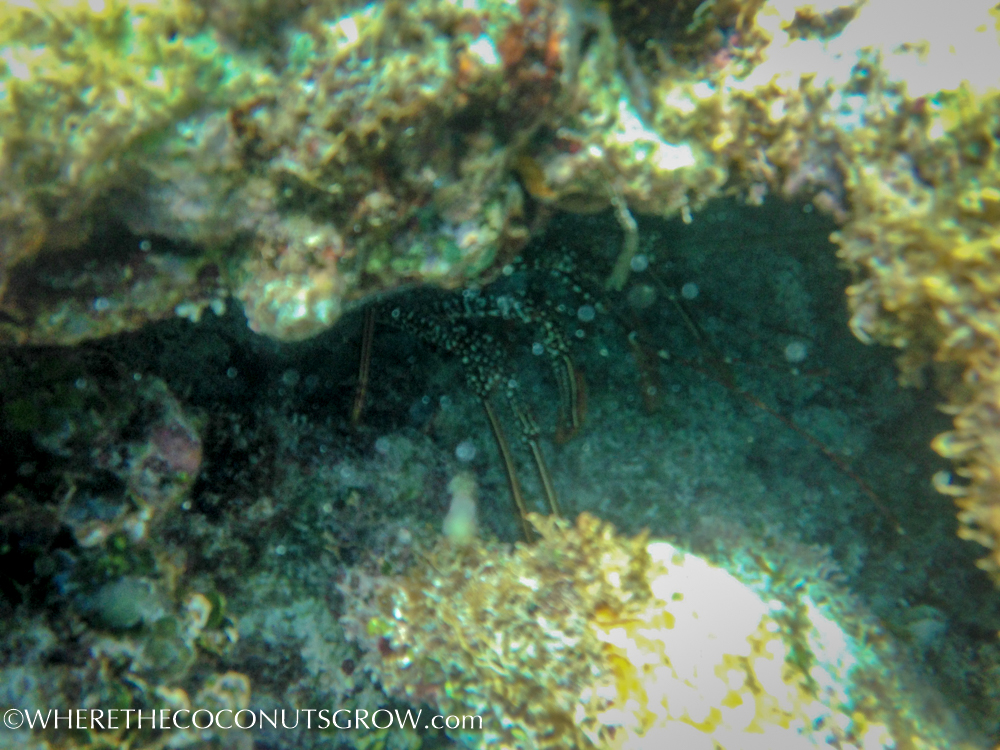 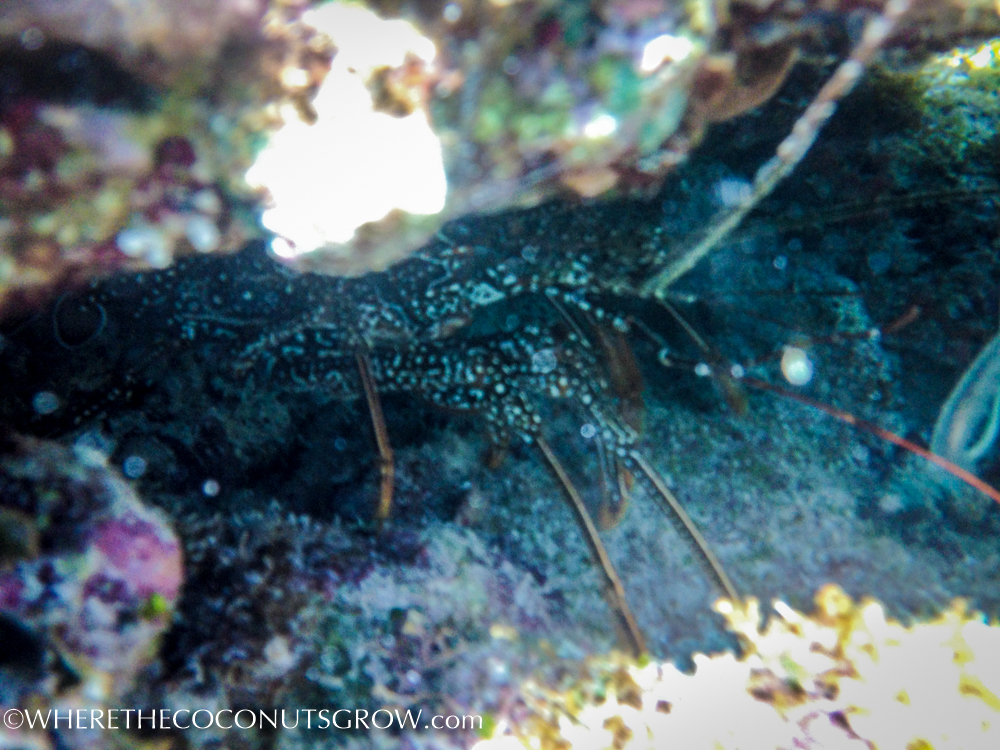 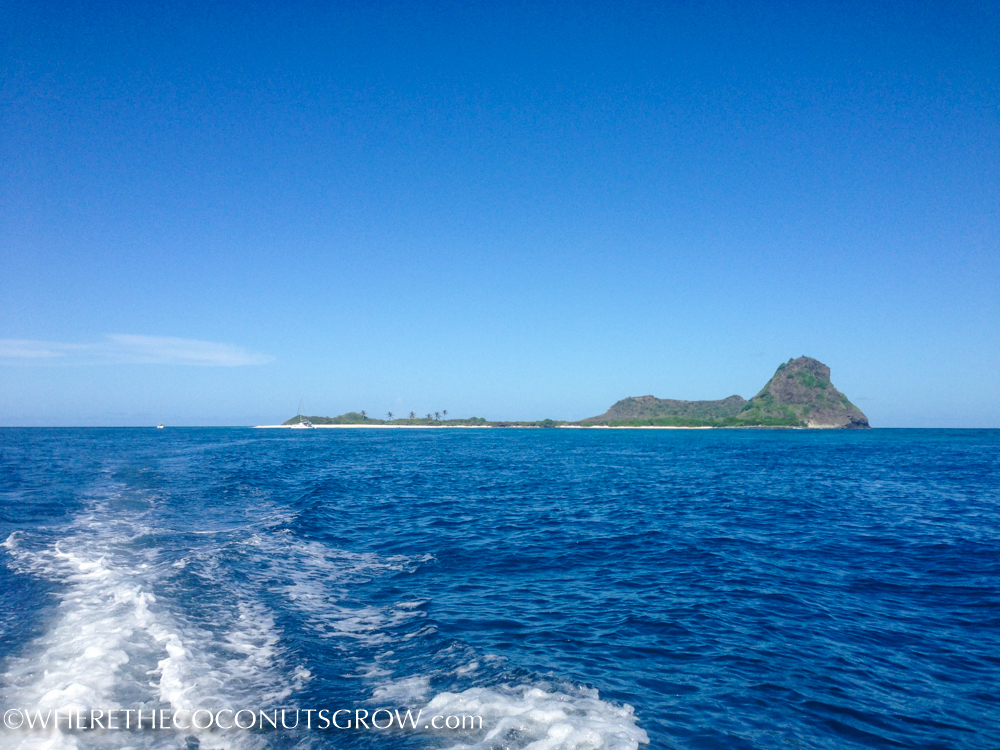 We got back just in time to see a spectacular sunset. The next several days were spent relaxing and feeling accomplished that we had actually made it ALL THE WAY down to Grenada!

The fun wasn’t over, however. On both the second AND third day after our terrifying arrival, we were hit by two more 45+ knot squalls while at anchor. Our holding was excellent so we just watched intently to make sure no one in front of us was dragging, and rode out the storms. We later found out that boats down on the South side of Grenada were clocking 65 knots! I guess we’d rather take 45 than 65.

How’s that for a warm and fuzzy ‘WELCOME TO CARRIACOU’!! 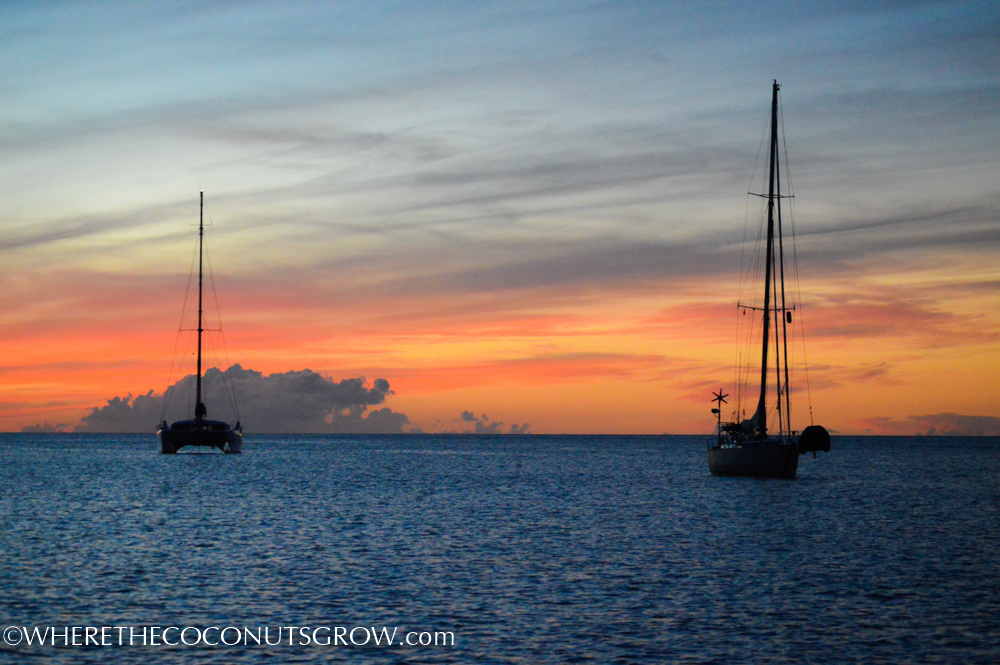