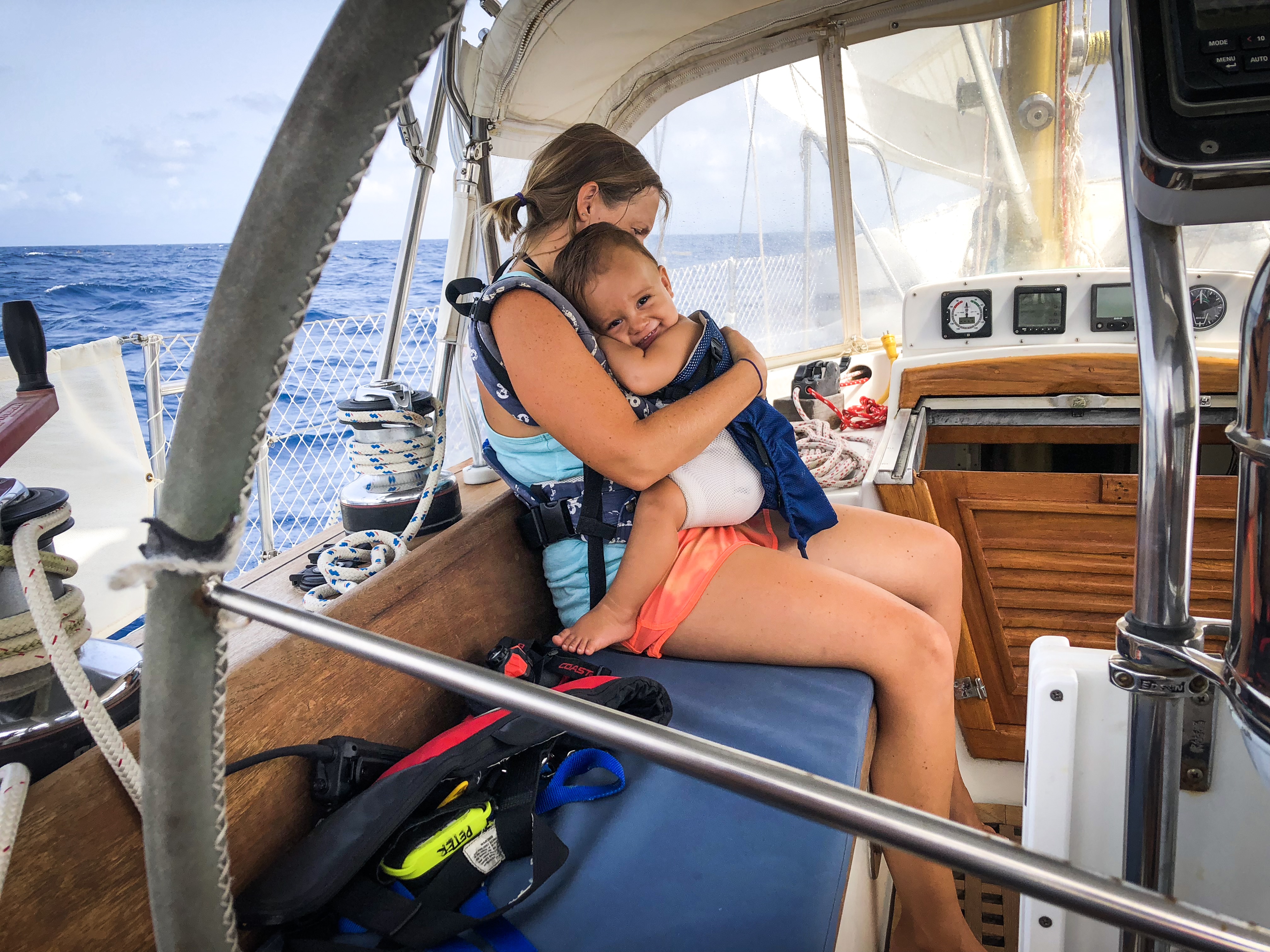 Here we are smack in the middle of July and well into the Atlantic Hurricane season – a time of year where we should’ve already been heading South. Peter and I discussed our options months ago and we both agreed that moving South to Grenada in June was the best thing for us this year. We’ve already spent two Hurricane seasons down there and we absolutely love it. It may sound like a simple plan to pick up anchor and set sail but things haven’t exactly unfolded the way we had hoped.

We knew we bought a project boat. We knew she needed some TLC to bring her back to the condition we knew she was once in. What we didn’t know was just how many other unforeseen repairs and upgrades would be needed along the way. The money we got back from our insurance claim on our last boat helped us to buy this one and get back on our feet but the cost of additional repairs has far exceeded what we had left over. Because of this, Peter has been working pretty much full time here in St Thomas in order to pay for the extra parts we needed and for our weekly groceries. I thought BVI was expensive but honestly I don’t see the food here on St Thomas being much cheaper at all. With a paycheck-to-paycheck budget and with Peter gone all day at work it’s been very difficult to get everything done to the boat that we want or need to do.

We thought we were finally ready to go. With three days left in the month of June we left our favorite spot in Christmas Cove and pointed off toward Grenada. The weather window was promising and our friends Rob and Deb from Cosmos Mariner were buddy-boating down with us. About two hours into the passage South when the seas started building, Peter noticed a significant amount of saltwater pouring into the vberth. How much you ask? Like a gallon a minute. It was pouring in from the dorad boxes and about four other places every time the bow sliced through the waves. The seastate wasn’t terrible but we also weren’t used to a boat that buried the bow so much. Our Whitby didn’t sail to wind this way. This boat was made to slice through in such a different way. Peter also never had these issues on the passage from Antigua to the VI because it was all downwind. We had done a small shakedown but nothing offshore in this direction. Brig was getting frustrated with having to stay strapped to me in our Lillebaby carrier and Peter determined there was no temporary fix he could do while under way that would keep that much water out of our forward cabin for the next 2 and a half days. At that moment he decided it was better for us and for the boat to turn back, make some repairs and wait for the next weather window. *sigh*

No big deal except for now our insurance wouldn’t cover us after July 1 in a named storm if we stayed “inside the box” instead of getting down to the lower latitudes. I immediately got a rider for our policy allowing us to be covered for another month in USVI – another unexpected added expense – and Peter began making repairs. He serviced the frozen dorad scoops so they could be removed and the covers installed closing them off. He recaulked our forward hatch at the base and along the top of the glass. He recaulked the windlass controls. He recaulked the staysail connection to the deck. He pulled up and rebed our two forward cleats, both of which ended up badly needing new bolts. And lastly he pulled up, serviced and rebed the windlass!! That was a NIGHTMARE job but really needed to be done. All I can say is thank goodness my brother Brandon is still here because he’s helped Peter every step of the way, to make this boat safe for all of us, as quickly as possible.

Our weather window is finally here. This time Peter doesn’t want Brig and I to go. Instead, he insists that we fly down to Grenada and wait for him there. It should only take him 2.5-3 days and then he won’t have to worry about us if the waves are miserable. My brother is still here with us and will do the passage too. Our friend Mike from Three Sheets Sailing is also going to go along so Peter can actually get a little sleep and take real shifts. My brother will be able to help a little but he’s never done anything like this before so entrusting him with the responsibility of being on watch when he doesn’t know anything about navigation or sailing isn’t really fair to him. I fly out in two days with Brig. It will be a very long day with one ferry and four connecting flights to hop down island but the good news is we will get to spend the weekend with our friends from the Sunkissed Soeters!! Brig will have so much fun with Darcy and Luuck’s boys, Stormer and Rio and it’ll be good for me too.

I get it… I understand Peter just wants to keep us safe. It’s a new-to-us boat and he wants to gain a little faith in our boat first before taking his baby out to sea in it. I also know it would be very difficult to entertain a one-year-old on a passage to wind. The first attempt a few weeks ago was challenging and that was just a couple of hours worth. Going below to use the head and to change Brig’s diaper just one time was very tiring. But part of me also feels like i’m failing at “cruising with kids” if I can’t even do a little 3 day passage with my baby. SO many other families take their babies on passages longer than this all the time so why can’t I? I know I shouldn’t feel that way and that I’m not failing and that we just need to do what is right for our family. But it’s hard to not think it. Oh well. It doesn’t even matter anymore. It’s another extra expense for the plane ticket but it’s just money right? Peter will just work a little more.

By Monday we should be all settled back on our boat together as a family in a Grenada. I can’t wait. ❤️