After five years of dating and non-stop adventures… 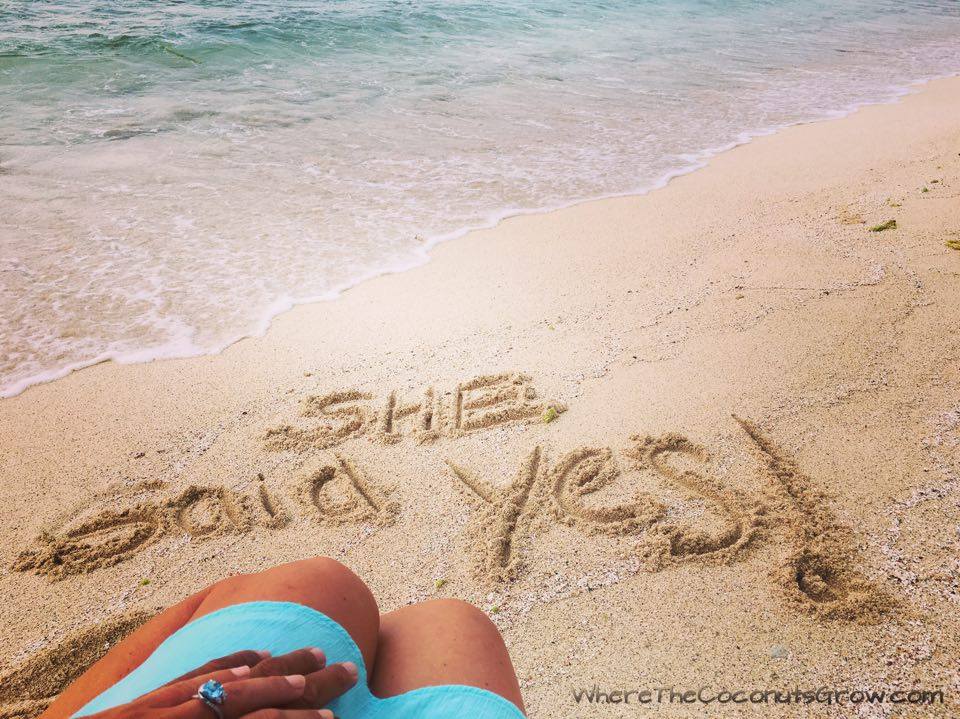 Peter proposed and I said Yes!

It was Monday the 13th of June. We had a much needed day off from work and took our dinghy out around the corner from West End to Smuggler’s Cove on the North side of Tortola for a sunset stroll. Peter let me out of the dinghy and he anchored it off the beach a little bit so I didn’t have to swim in. I had never been to this beach before so I was excited to explore a new place. The hours before sunset are notoriously buggy at the beaches so we promptly applied bug spray before getting any bites and began our very romantic walk up to the Eastern end of the beach. After almost stepping on a washed up urchin, we turned and walked the entire length of the beach toward the other end.

Near the picturesque palm trees there was a family playing in the sand and swimming around but we pretty much had the rest of the place to ourselves. Out of the corner of my eye I spotted a baby reef shark swimming by in the shallows and we watched the gentle waves roll up on the sand. The cool Caribbean breeze kept most of the bugs away and we finally arrived at the “end of the road.” From that moment on, our lives would never be the same…

Peter got on one knee and magically pulled a grey box out of his pocket. With the most genuine and loving words, he asked me to marry him!! 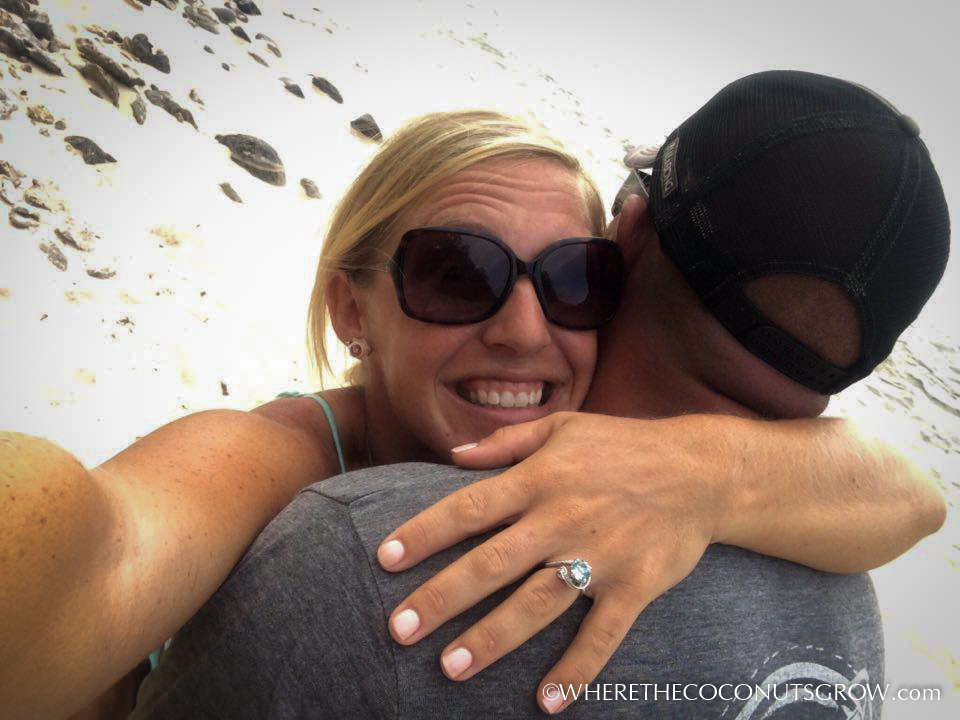 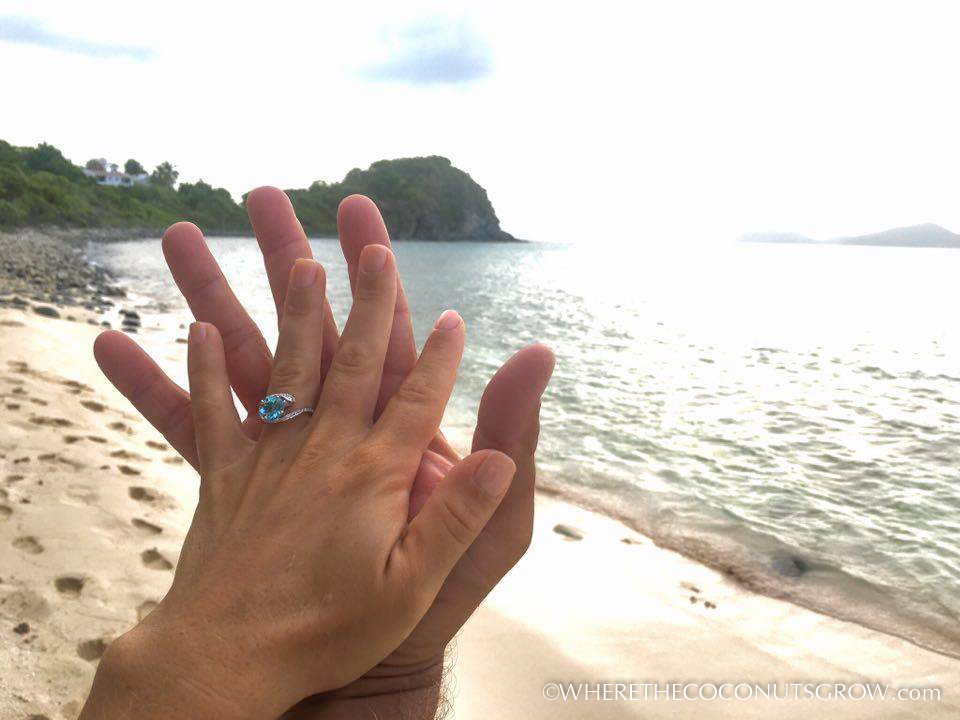 We were both a little in shock of what just took place, but we were both very much ready for it also. For a very long time our conversations had included talk of marriage and kids, though we weren’t sure when that would happen. My mom had been visiting a few months prior and one day after another casual mention of our future wedding, Peter nonchalantly told me to go pick out a ring… So I did!

My mom and I drove into town while Peter was busy getting the fuel tanks polished on Aristocat. There aren’t many jewelry stores on Tortola but I’m pretty sure we found all of them. I’ve looked at engagement rings before in various cruise ship ports but not with the same mission as this day. This day it was real. I was really going to get married! I wasn’t just looking for a ring I might like “someday” – I was looking for a ring I liked now. I always thought I wanted an Emerald (my birthstone) as the center stone for my engagement ring. I wanted something different than what everyone else has. Emeralds are cheaper than diamonds yet not as hard as diamonds – a real concern for someone like myself that lives on a boat in a harsh salt water environment where I’m constantly using my hands. Our active lifestyle is rough on our bodies to say the least and knocking my ring against stainless steel or getting it caught on something is a very real danger. But, I loved emeralds.

I began asking to see the available emeralds in the first store we visited, but quickly realized the most efficient way to start this shopping experience was to find a setting I liked first, then worry about finding the right stone. The selection was very limited. I didn’t see anything I had to have, even with the very familiar sales pitch that bellowed softly from the lady behind the counter.

A small calculator is brought out from under the counter and many numbers are pounded into it, several different times. Finally, the calculator is turned around to face me and I see a significantly smaller number that I still don’t like.

I take her business card and assure her that I’ll be back if I change my mind.

The next store was much larger though they only carried diamonds. The woman in that store kindly didn’t waste my time or hers and referred me down the street to another store that would have a better selection of gemstones. I swiftly browsed the engagement ring settings but nothing caught my eye, and we were on our way.

The store she referred me to was at the very end of the cruise ship pavilion. On the way we saw two other jewelry stores, both of which had very small selections since the stores had just been built. All of the shops in this area were brand new. I started looking at sapphires and blue diamonds and aquamarines. The half a dozen emeralds I saw were not the right size or shape, nor were they in any settings I liked. I tried on an emerald cut aquamarine with a pave halo around it, which I kind of liked, but didn’t like the halo design at all.

Another store tried to show me yellow diamonds set in rose gold that were all being removed from little plastic bags like they belonged in a gumball machine. They were all identical. No thank you!!

Finally we arrived at the last store, but they were closed! Just then, I saw a man in the doorway and I asked when they would be open again, since I don’t ever make it down this way. I told him about my mission to find an emerald engagement ring and he offered to let us in and show us what he had. While they didn’t have many emeralds, they had an impressive display of tanzanite and he put one up on the counter. When I am shopping, I am very picky and can quickly identify the things I do not like, but end up taking forever to decide on the things I do like. I tried on a few of the brilliant bluish purple rings and quickly became fascinated with their history and beauty. I only liked three of the hundred on display; one of which was a 3.5 carat cushion cut tanzanite solitaire. Some would call it gaudy but I thought it was stunning. By this was by far my favorite cut and size on my finger.

I thought it was the one. I took some photos and told the nice man we would be back!

Later that night we showed Peter the photos and he agreed to go look at it on our next day off. We did go back, but after a little time had passed, I wasn’t sure it was the right ring. Peter knew right away it wasn’t me, though he wanted me to come to that conclusion myself. So that night I began my internet search for the perfect setting and perfect stone. I was just going to order it all, in good time, instead of buying something in a store just to have it right away. 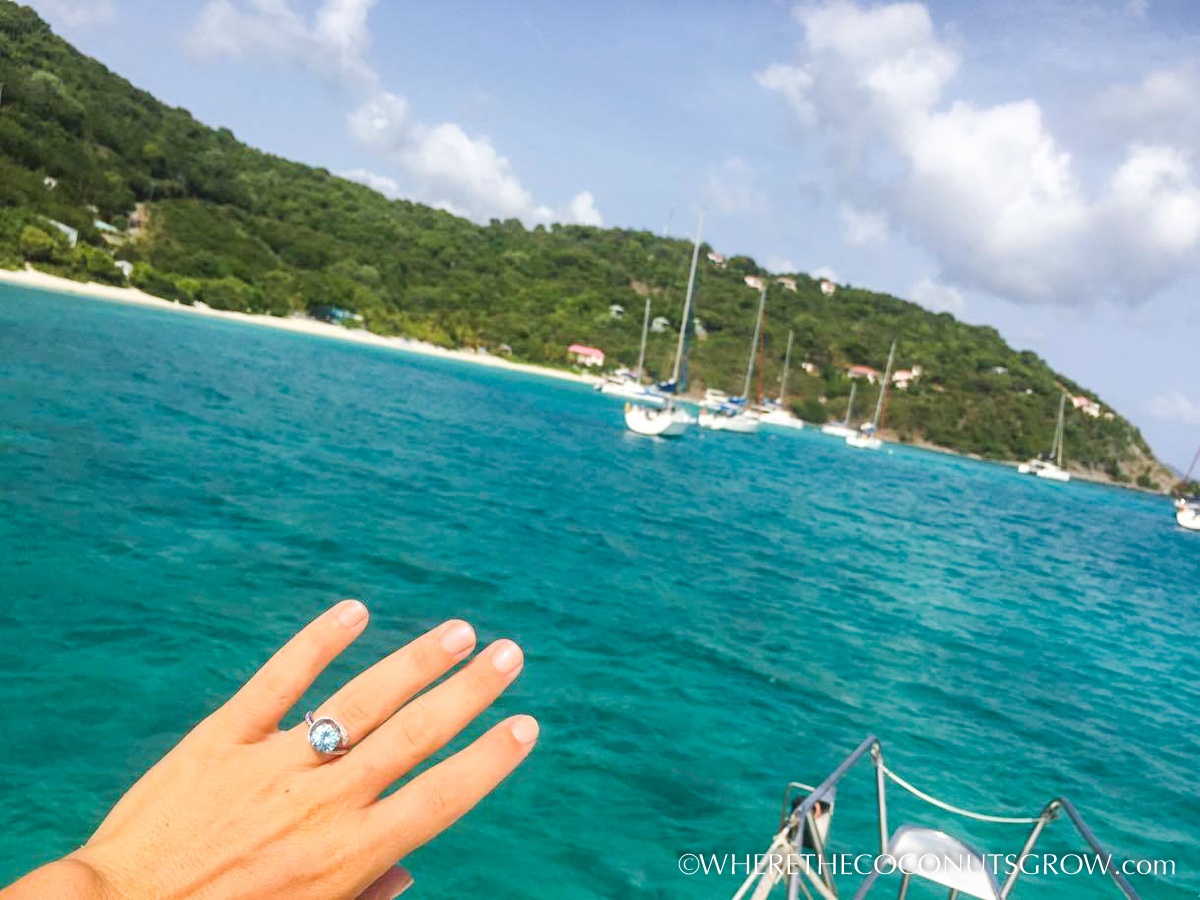 I ended up finding a gorgeous setting from a jewelry designer in California that to me, looks like a wave – I wanted something ocean-minded. After looking at thousands of different ring styles, this one is nothing like any other ring I’ve ever seen. As unique as it already was, I wanted it to be even more special. Along this search I decided that I was going to let go of my long love of emeralds and choose an aquamarine center stone instead.

Aquamarine is Peter’s birthstone. It’s not any softer than an emerald and its much much cheaper than diamonds or emeralds. It’s the most gorgeous color of blue, perfectly matching the crystal clear waters of the Caribbean. What really sold me on this stone is the significance of it…

How perfectly fitting for our lifestyle!! I fell in love with the stone right then and there. I had to have it.

The jeweler found the perfect stone for the setting I chose and it took a little over a month from start to finish to have the wax mold made and sent to be cast. Our good friends from Windtraveler and Sunkissed Soeters were all very instrumental to helping get the ring to us in BVI as it was carefully transported a great distance. When it finally arrived, Peter and I both agreed a proposal was in order on our very next day off :) Although it wasn’t a surprise, the moment was as perfect as I could have ever dreamed it to be!

Clearly I’m all about being non-traditional. I picked out my own ring, I didn’t want a diamond center stone, and the proposal was not a surprise. We don’t have a date or location set for the ceremony though it will most likely be very small and happen barefoot on a beach ;) I’m not into big to-do’s and I don’t believe in spending a bunch of money on a dress I will only wear for a few hours of my life or on a venue and decorations that will disappear at the stroke of midnight like Cinderella. Our hard earned money will be better spent in support of continuing this amazing journey and enjoying many wonderful experiences, instead of just one experience. Going against the grain is normal for us and our wedding will be no exception ;)