So… we live on a boat. And we have iPhones. It was only a matter of time before we got one of them REALLY wet.

A lot of people get protective cases for their phones, tablets, ipads and other electronics to protect them from scratches and from shattering if dropped on the concrete. Earlier in the year, while planning for our epic adventures, our friends Josh and Leah suggested we invest in the LifeProof iPhone cases. They had just purchased two of them before their travels to Costa Rica to keep their iPhones waterproof while playing on the beautiful beaches. I was a little skeptical on how necessary it was to have a waterproof case since they retail for something like $80!! I mean, do you really need to have your phone with you when you’re at the beach? How often are we really in the water?

It had never occurred to me that I could just buy a rugged case and then be able to take pictures and video no matter where we go!! If we had waterproof cases we wouldn’t have to worry about sand getting in the buttons or worry about salt water ruining the screen. Even dropping it on the rocks wouldn’t bust the phone. We decided it would be a pretty important investment if we wanted to be able to have the iPhone camera and GPS apps handy no matter what kind of crazy places we might end up in.

Two LifeProof cases arrived soon after that :) The volume quality is slightly diminished when on a call but the slight sound sacrifice is SO worth it… even though family members might get tired of telling us they can’t understand what we are saying… (sorry Bean!)

LifeProof claims to be water proof, dirt proof, shock proof and snow proof – even to military specs!! Boy did we get a chance to test out how well it keeps out water! Last night Peter was stepping up from the dock onto the boat and as he ducked into the cockpit he heard something hit the deck and plop into the water. His hands went straight to his pocket and, sure enough, his phone was GONE. Just as fast as the phone must have sunk to the bottom of the marina, so did Peter’s stomach. It’s such a sickening feeling when you know something really bad just happened.

It didn’t just fall in the water… it fell in the really icky brown salt water with 6″ visibility. Our slip is at least 11′ deep according to our sonar transducer on the boat and the bottom is a foot thick with mud. Our neighbor Cyndy reminded us that the reason it’s so stinky is probably because there’s more manatee poop on the bottom than there is mud!! There’s a LOT of manatees here and its a frequent occurence to see a big fat turd going out with the tide after floating up from underneath a manatee. We’re not kidding folks, it’s not from the boaters either.

Determined to find a way to save the phone we had to do some quick thinking. What do we do? Grab our two boat hooks, the net and some duct tape of course!! It was 11:00 at night, dark and the clock was ticking to figure out how to find it before it was sucked into the mud. We knew he had the LifeProof case on, but we weren’t totally sure if he closed the latch on the bottom where you plug in the power cord. If it was closed, there was hope for his phone yet! If not, it was toast. Mark is the local diver that cleans the bottoms of most of the boats here in the marina and Peter and I both knew he would say, “It’s GONE man!” Not even Mark would dive for it in this mud. 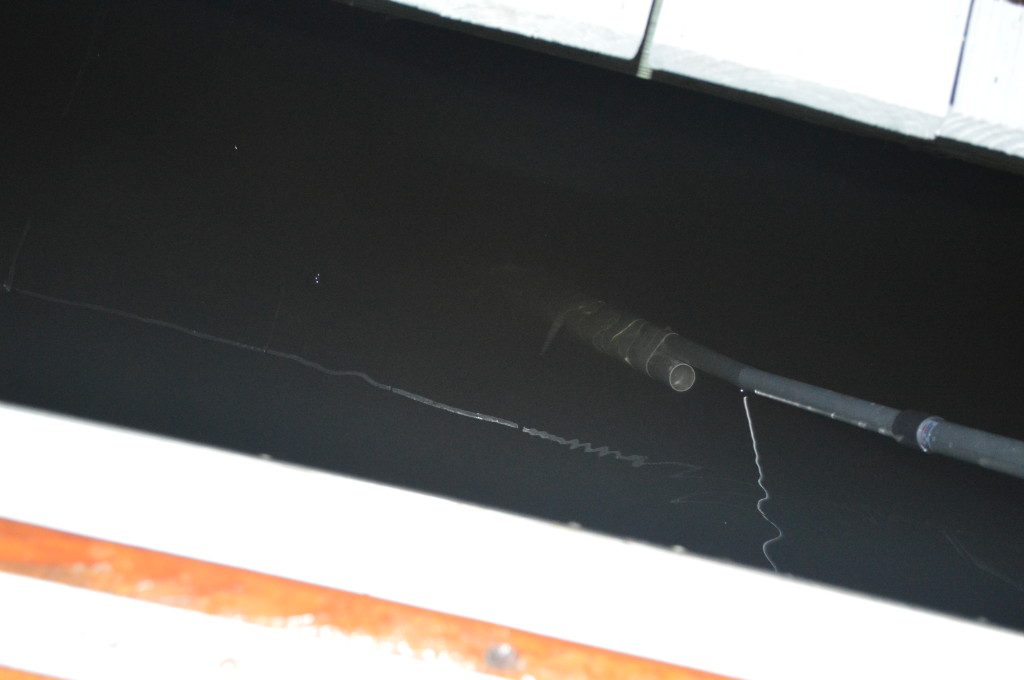 I scrambled to grab the camera while Peter started making a couple sweeps with the jury rigged net. I just knew this was going to be our next blog post, hehehe :) 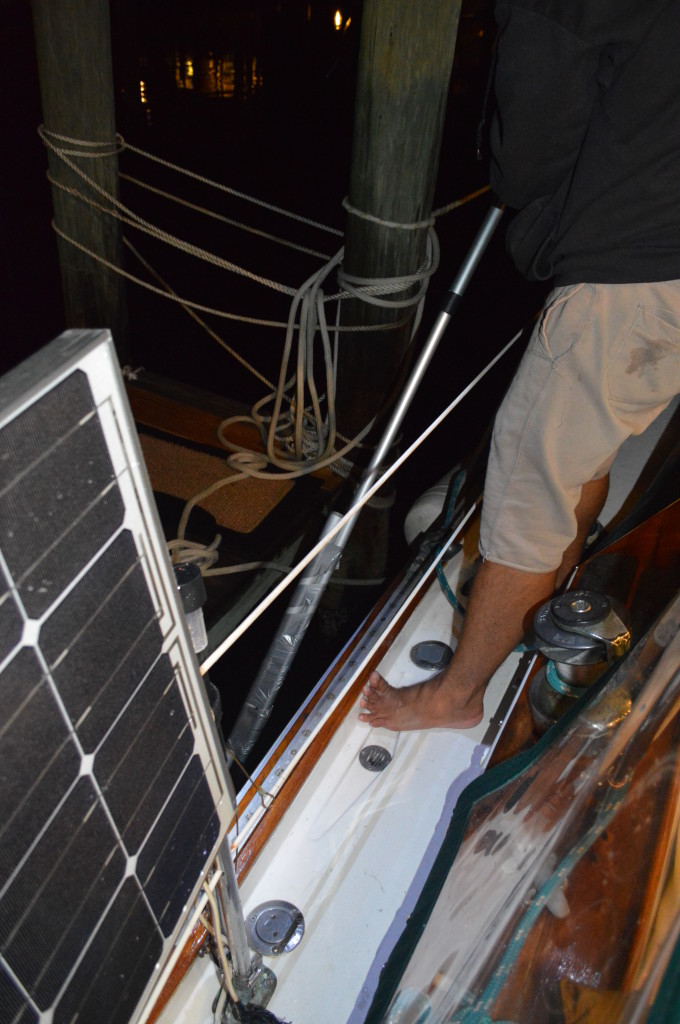 With just a foot between the boat and the dock there was at least a focused area for Peter to search. It just had to be down there somewhere. He saw where it went in but we weren’t sure if it went straight down, or if it had bounced out a little from the boat underneath the dock. 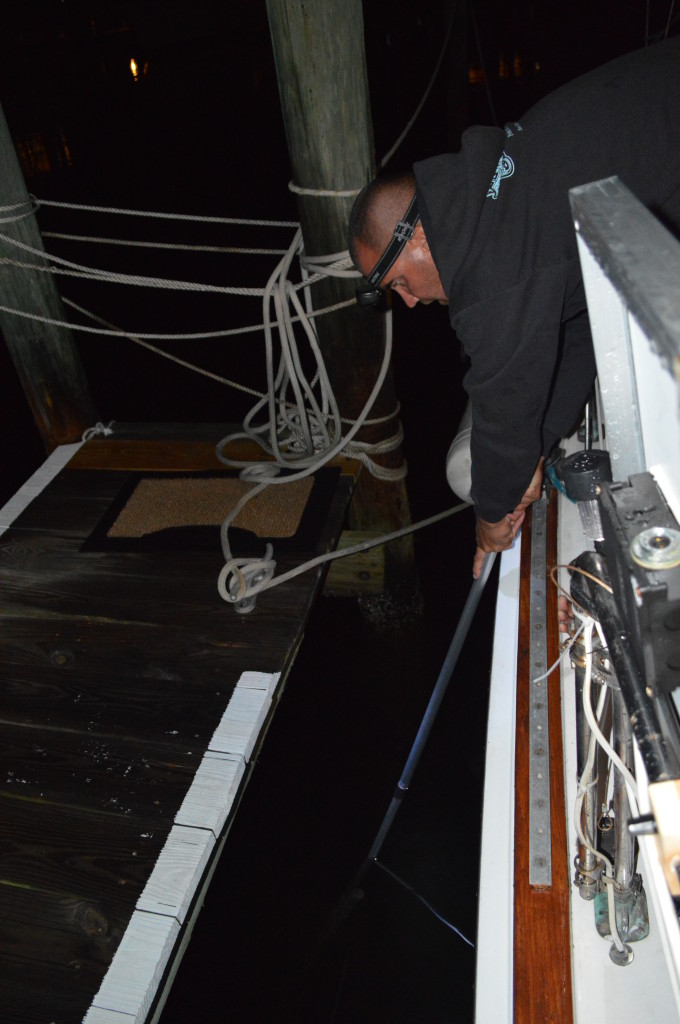 We were actually lucky that all that manatee poo and mud was down there or else the net might have just pushed the phone around on a hard bottom surface. The mud allowed Peter to stab the net down a few inches into the mud and then pull it sideways a couple of inches. He would lift the net up and over one inch, then stab it back down to sift through some more. It was so thick that he couldn’t just drag it all the way across the bottom. 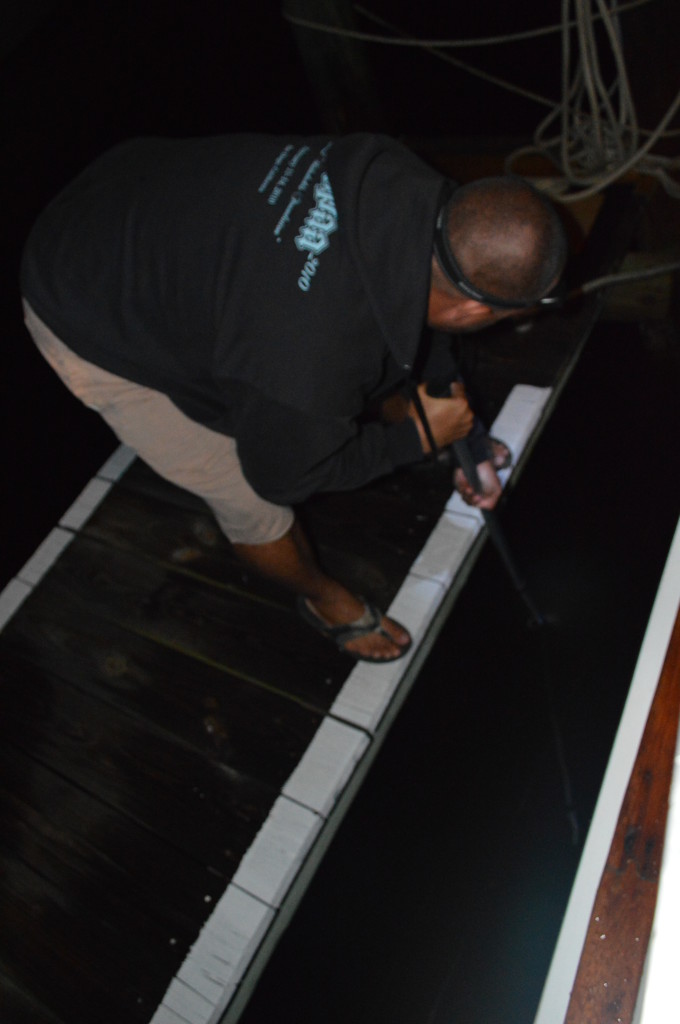 After a few minutes of this he was ready to give up. He was thinking of how much of a pain it was going to be to file an insurance claim with the cell company and get a replacement. He would have to pay a $200 deductible for the replacement, then go through the hassle of reinstating the last backup he did. Who knows how long ago that was :S Of course, all of his photos and personal settings would be gone. Not the end of the world, but for our generation its heart wrenching when something happens to your smartphone!!

I just KNEW he was going to get it eventually. I begged, “Keep looking! Keep looking! Just a little longer…” Peter was doubtful, but took another “stab” at it. As the net came up to the surface it was a little heavier than before. 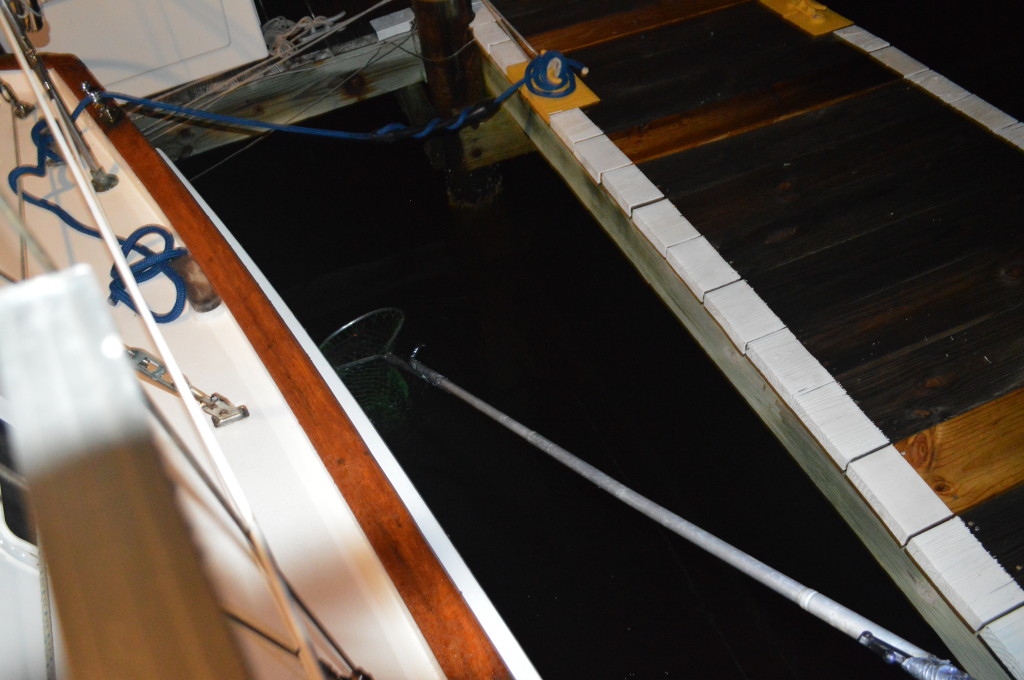 Can you believe it???? With NO visibility, we got it!!!!!!! But HOLY CRAP that was some stinky mud that came up with it. It smelled like a port-a-potty! Yuk!! 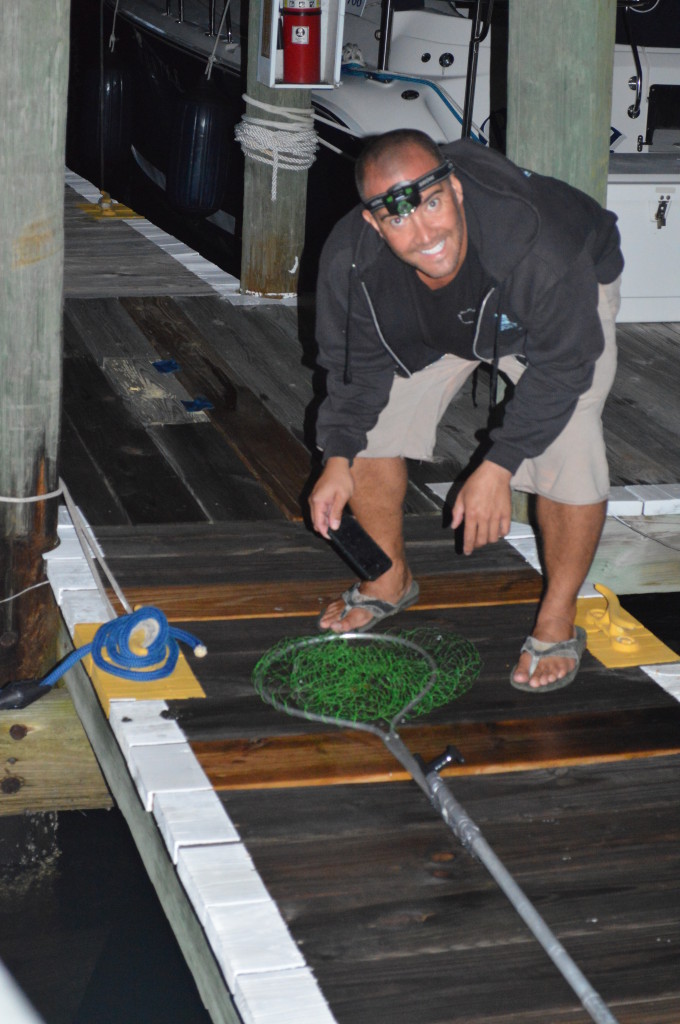 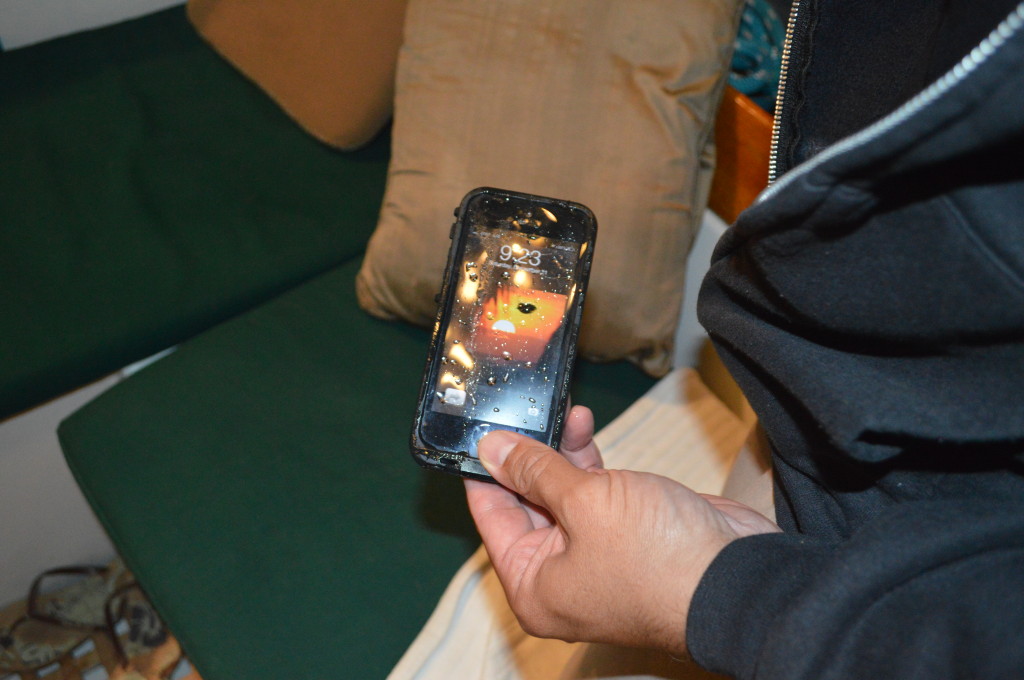 I tried to get a shot of just how long our contraption was but it was as long as the whole finger pier of the dock. By this time I was over the photos and just snagged a quick shot on my iPhone but it was still hard to see. 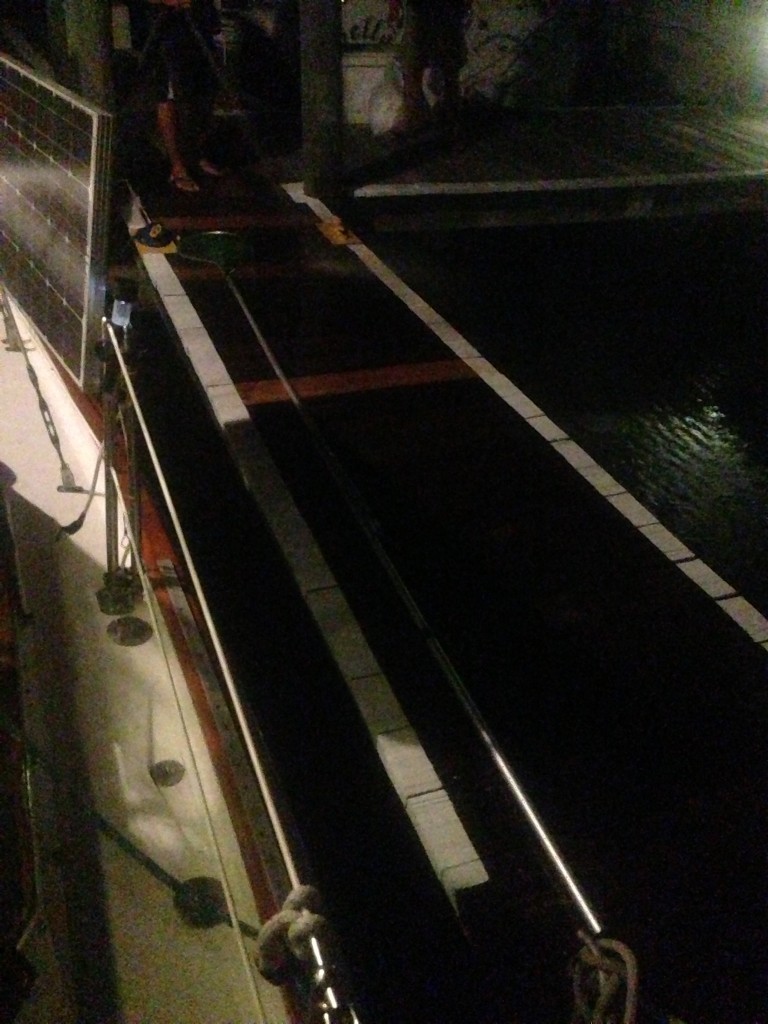 LifeProof only guarantees their cases for water immersion up to 2 meters for 1 hour. That’s about 6.5 feet. Peter’s phone was at 11 feet for about 20 minutes and it passed the test with flying colors. There was just a TINY bit of water on one edge of the phone when we opened the case but not enough to make any impact at all. The case got a thorough bath and we placed the case and the phone near our AirDryer 1000 dehumidifier for about an hour to make sure they got totally dry.

If our LifeProof cases can withstand the saltwater and mud at 11′ deep then it should do just fine for taking underwater pics of all the sea life when we get to that crystal clear water in the Bahamas ;) I’m feeling a little more confident now in just how “lifeproof” our cases are and can’t wait to test it out again in a more desirable setting :) 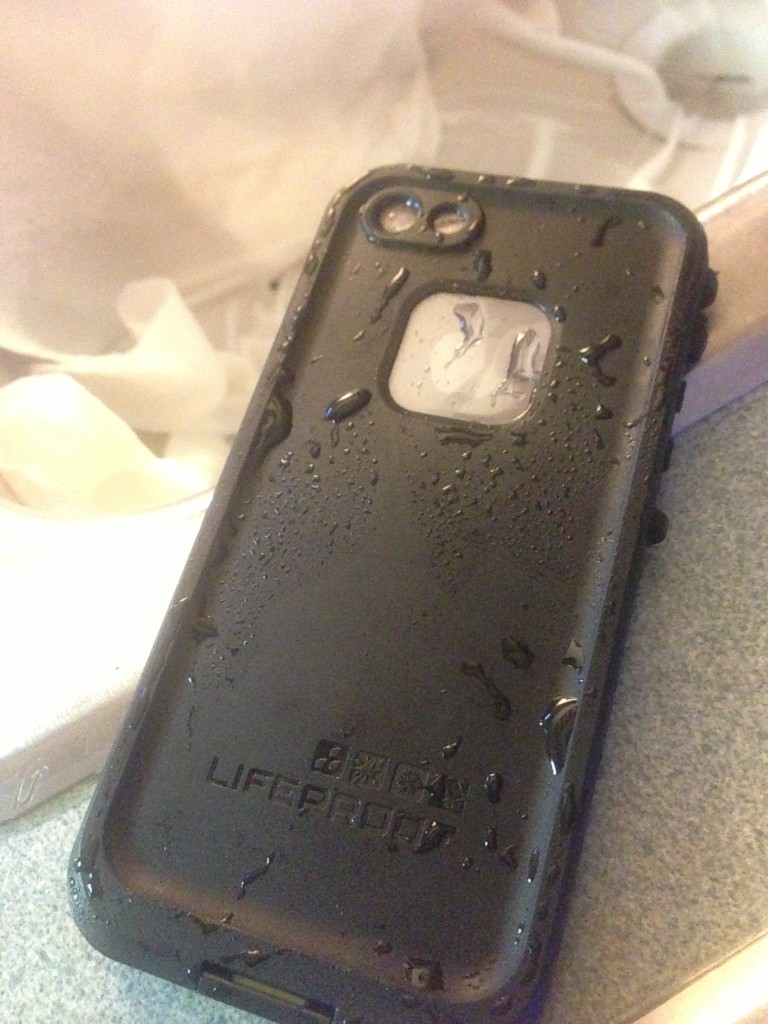 Peter is one lucky guy ;)