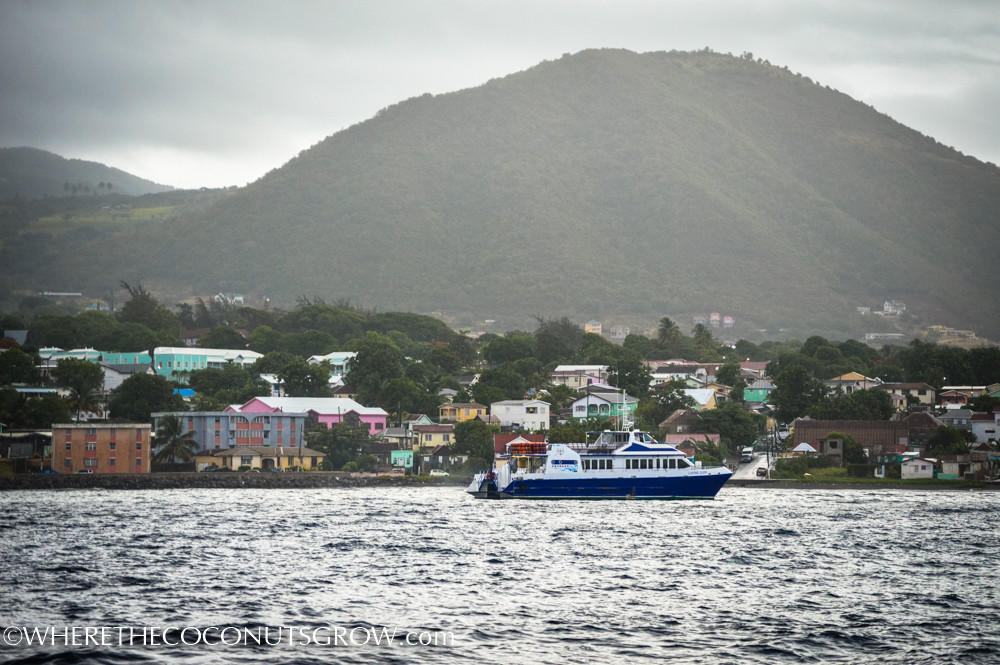 As the sun was setting, we pulled in to the anchorage at Basseterre. It was a commercial and unprotected bay, yet the regulations in St. Kitts left us no choice but to anchor here for the night and check in to Customs the next morning. Other cruisers had warned of skipping this stop where, if caught anchored in the more desirable locations to the South without checking in first, the fine are astronomical.

The entrance to Port Zante Marina was right in front of us, but daylight was quickly fading. We had tried hailing the marina on the radio from 4:45 pm all the way up until our arrival at 6pm with no reply. (We later found out the marina staff had decided to leave work at 3pm that day. How convenient.) Without being able to see the approach and availability of slips, we decided to not enter the narrow channel and instead anchor just outside in 20′ of water. Only one other boat was in the harbor; a 226 passenger ferry named Caribe Surf, anchored maybe 200′ away. We dropped the hook, made sure our anchor was set, and went to sleep after a rough passage from Statia.

Peter had been awake all night worried about our anchor holding. He had finally fallen asleep around 5am. I awoke a little after 6:00 to the sound of Windy (our wind generator) cranking faster than we’ve ever heard before. With a quick peek outside, it was apparent that we were smack in the middle of a squall. Winds were gusting at 45+ knots and we were surrounded by a wall of white.

I woke Peter up immediately and within seconds he flew up the companionway ladder into the cockpit. Still in bed I called out, “is everything okay?”

I was a nervous wreck as I climbed outside as fast as I could. Rain started pouring in from every direction. I looked around. We had left the mizzen sail up overnight for stability so we were a bit concerned that the sail might blow out in the squall, but I quickly saw we had bigger problems.

Big is an understatement. The 90′ ferry was coming right for us, backwards. 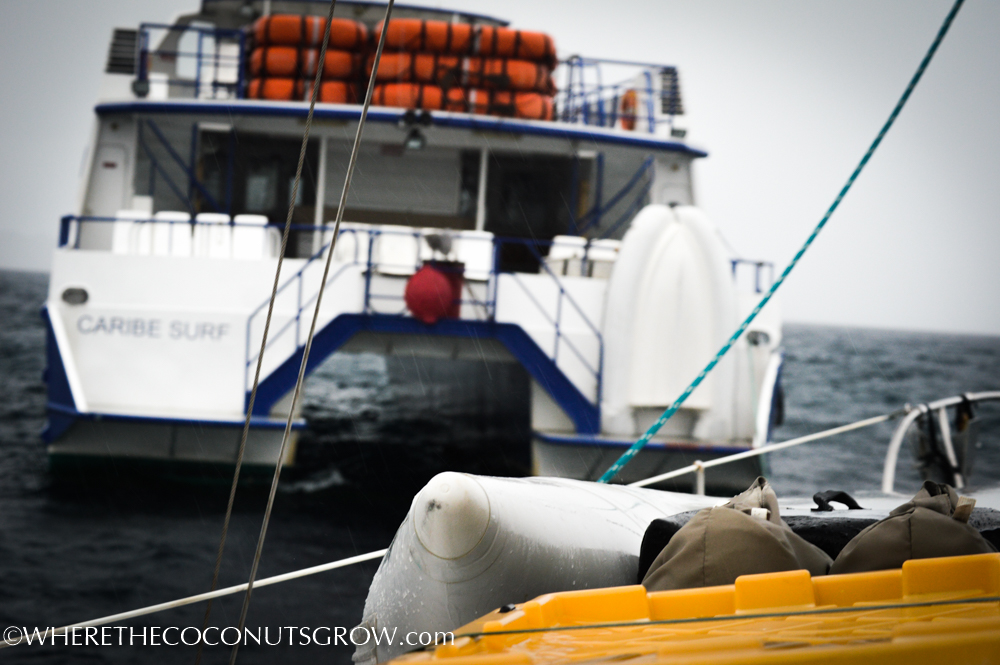 It just didn’t make sense. Why was it getting closer and closer? Just then we realized, “there’s nobody on that boat and it’s dragging!” The crew had left it anchored overnight with no one on watch. Surely no one was expecting a squall to blow through.

The big blue power-cat was swinging like a pendulum in the wind as it grew closer and closer to our bow. Back and forth it swung on an arch, with each gust getting dangerously closer to us. 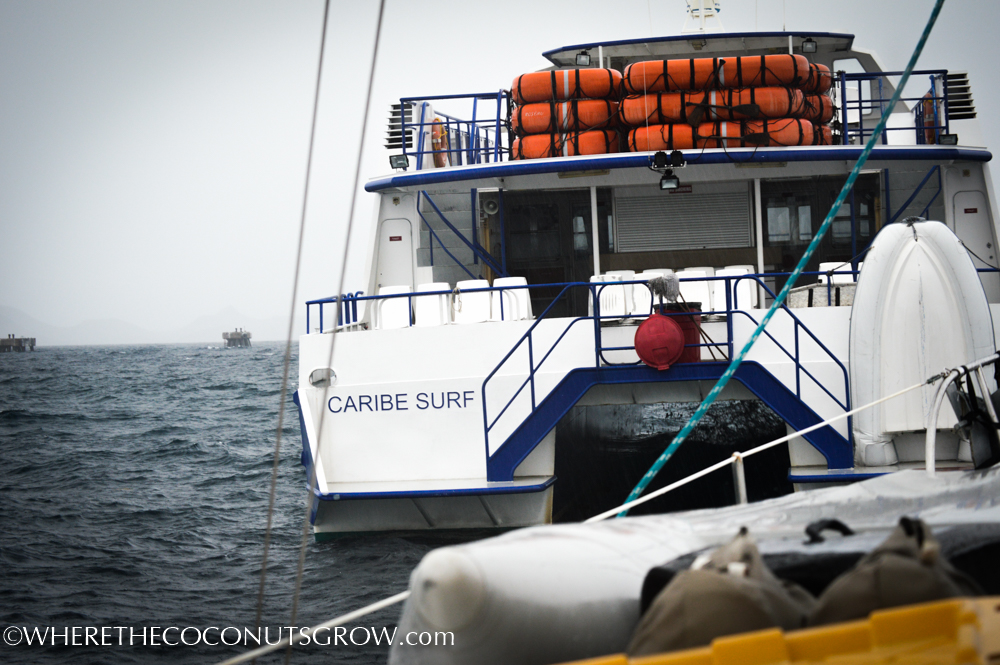 We knew we needed to get the sail down, but didn’t have enough time. From where I was standing it looked as if the ferry had already bumped us, though I hadn’t felt the massive aluminum hull bump us yet.

Our Delta style anchor was holding perfectly but Caribe Surf was about to either hit us like a freight train, or catch our chain and drag us to shore. Luckily it was a catamaran and swung just above our rode, avoiding a nasty tangle.

Peter was on the bow trying to hold on to the lifelines as we bounced up and down from the waves. He let go of the snubber after wrapping the main rode around the cleat. His original plan was to let out 50% more rode but just as the last of the rode burned his hands as it slid through his fingers, the ferry was within four feet of our bow. It wasn’t helping. 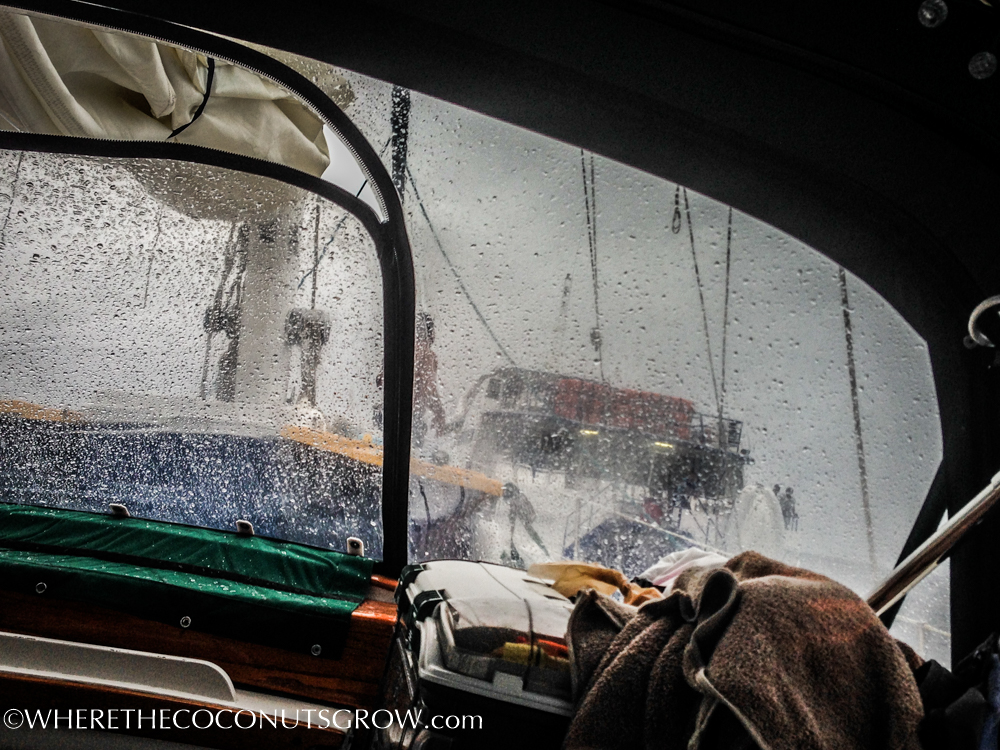 My whole body was shaking at this point. Both fear and the chill of the piercing rain and wicked wind set me into an unstoppable tremble. Within a matter of seconds I turned the engine on and I yelled out, “Cut the anchor loose!!!!! HURRY!!

It seemed like the wrong thing to do at the time, but Peter knew we had no choice but to let the anchor go.

I scrambled to get the chartplotter, radar and instruments turned on. As soon as he confirmed we were free from the anchor, I hit reverse as hard as it would go. Everything was happening in slow motion. Rain had soaked our entire cockpit but that was the least of our concerns. Suddenly, we started pulling away from the ferry and just as it swung left, I gunned it forward right at 2,000 rpms. At that moment, I was more grateful than I had ever been for our 34 year old 80-horsepower tractor engine.

Still trembling, I motored out to sea away from that horrid ferry.

Peter quickly ran from the bow to the stern to drop the sail after we were out of immediate danger. The squall was still blowing 30+ with zero visibility. He singlehandedly dropped the sail as fast as he could, tying it to the boom in a big heap. Next, he pulled the brake on the wind generator, locking it down. We both looked back to see that the ferry had already run aground on the rocky shore. Whew! That was a close one.

We’re so grateful it happened in daylight. Even though the wall of rain reduced our visibility dramatically, we were still able to see the cruise ship pilings which matched up perfectly with the charts.

Entering a new anchorage, it’s always difficult to know which way gusts will come from and which way a boat might drag. As was the case in St. Kitts, this ferry was on top of us within seconds even though we thought we had picked a good spot to anchor.

After we were motoring out to sea I dug out the lifejackets. We were headed into larger seas and there was no telling when the storm would blow over. Eventually the winds subsided to a manageable 15 knots.

While we were motoring back and forth across the harbor, we saw a small orange tender arrive at Caribe Surf an hour later where they were grounded near shore. We motored closer to them as they prepared to reset a second anchor and we yelled off the bow for the Captain to turn the radio on. 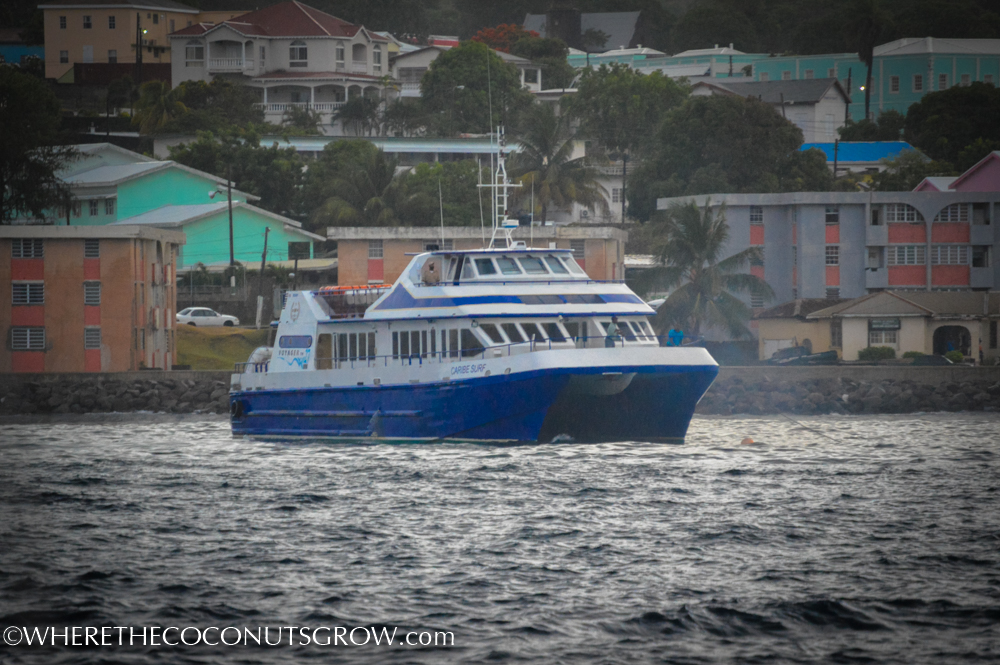 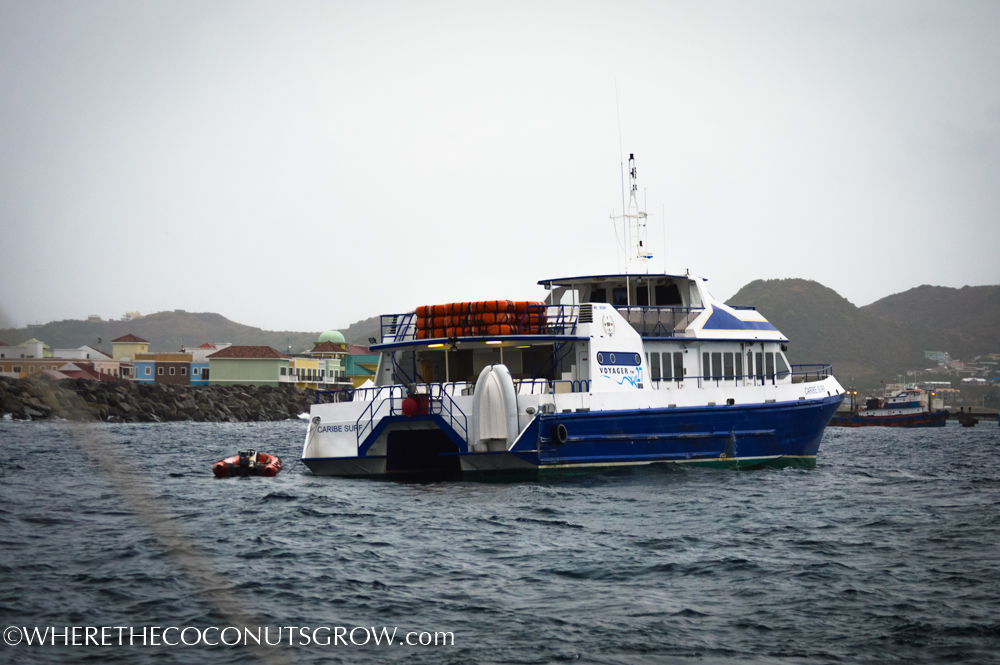 Peter tried a few channels before finding one without traffic and spoke to the Captain.

“Good Morning, this is Caribe Surf. How can I help you today Sir?” He had such a cheery voice, despite the unfortunate chain of events that had just taken place.

Peter wearily explained how their boat had just drug into us during the squall and that we had lost our anchor, leaving no way to secure our vessel. He calmly and kindly told us to pull up to his stern and toss them a line while we wait for his diver. “He can retrieve your anchor.” It was like de-ja-vu pulling up to their stern in the wind. Peter was on the bow while I was at the helm. The damn thing nearly hit us, and here we were getting back into the very position we tried so hard to get away from! A little PTSD ya think?

It turns out that Caribe Surf busted a fluke on their anchor during the squall, causing them to drag with half an anchor still buried. The crew laughed, “That was a nasty squall, wasn’t it?” 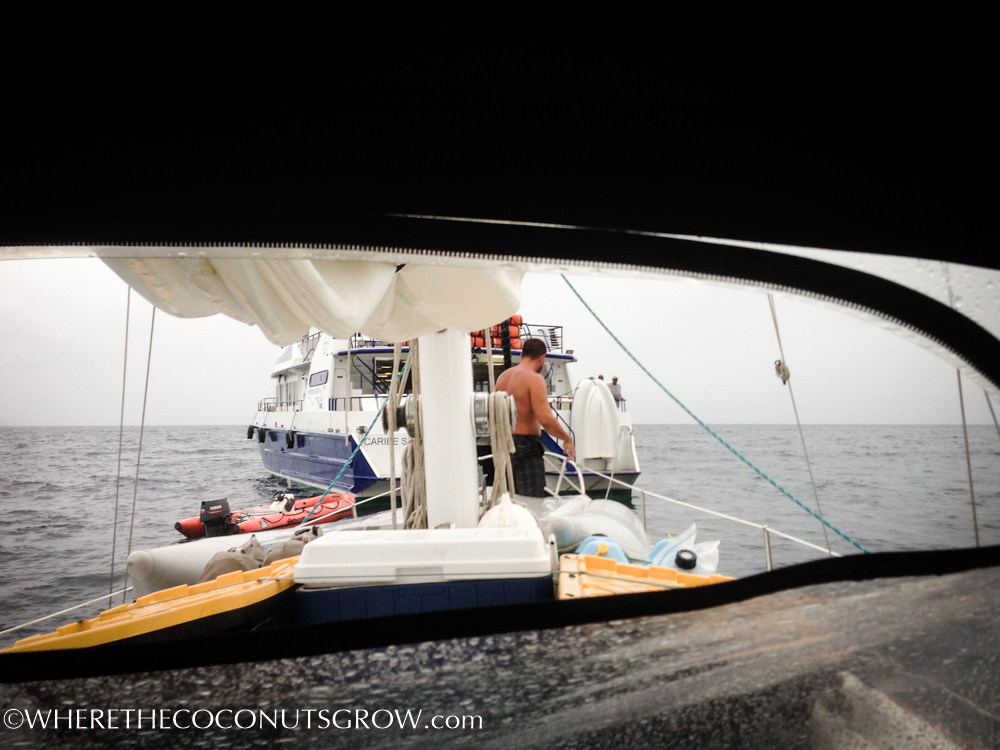 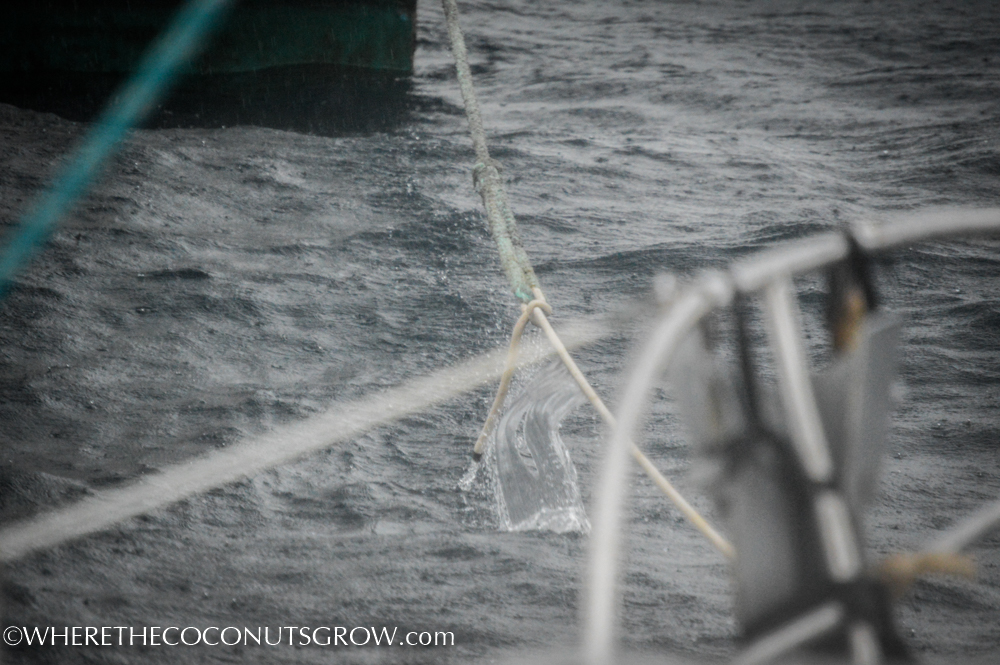 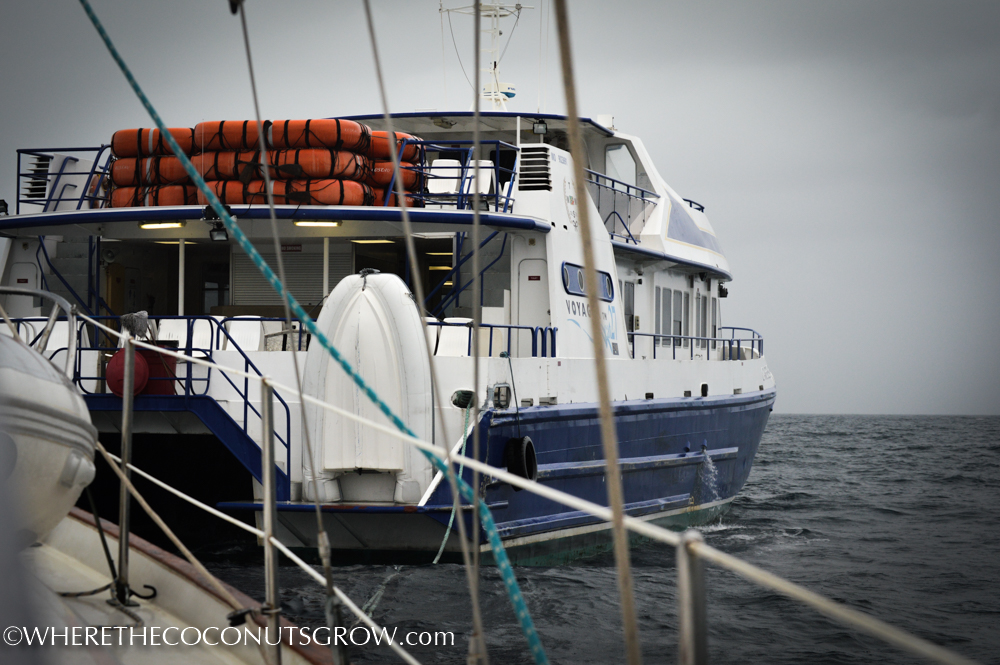 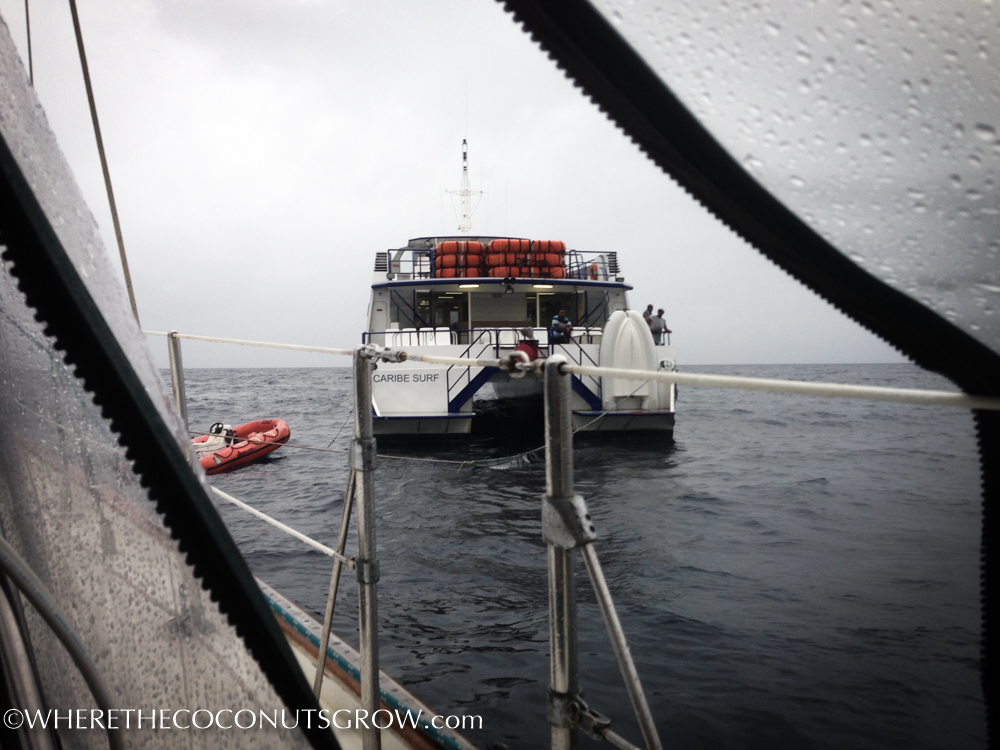 After what seemed like an eternity in the early morning hours, the diver finally arrived. Peter went with him bringing our iPhone to show him where our anchor was on the Garmin app. The crew on Caribe Surf had gone back to shore and I was on Mary Christine alone with the dogs watching intently as the two men searched for the anchor. 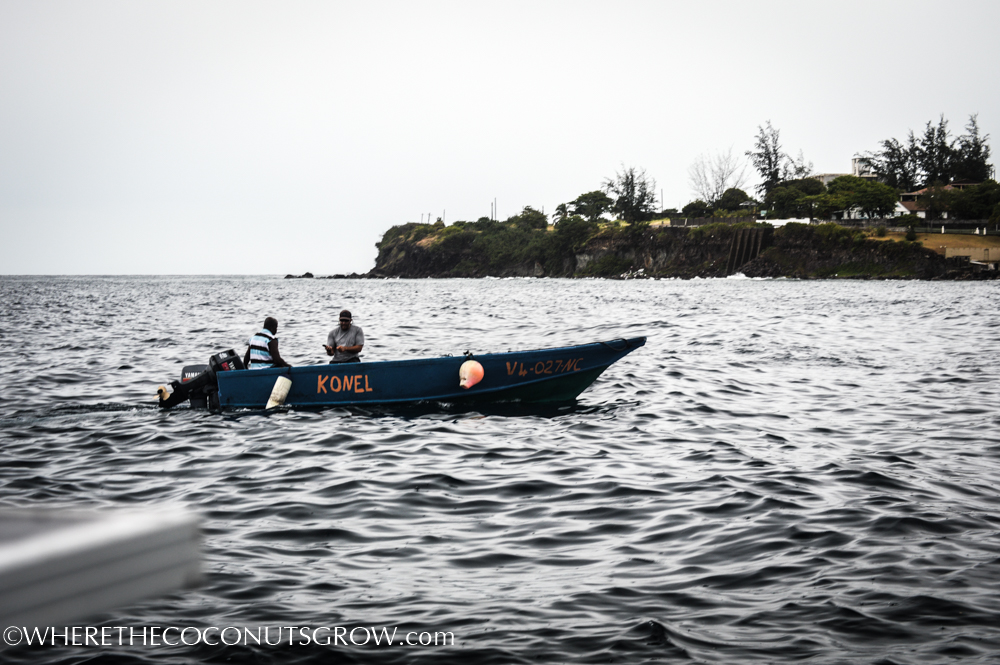 As luck would have it, the light winds turned fluky and Mary Christine gained slack on the line connecting us to Caribe Surf. I was drifting too close for comfort and even began to face opposite ways. I shouted across the harbor as loud as I could to signal Peter that I was in trouble. I quickly turned the engine on and began to reverse away from a second possible collision with this ghost ship. Of course our full keel and undersized rudder makes it near impossible to reverse in the direction I want to go, but I managed to get far enough away until Peter and the diver could release us from the ferry. 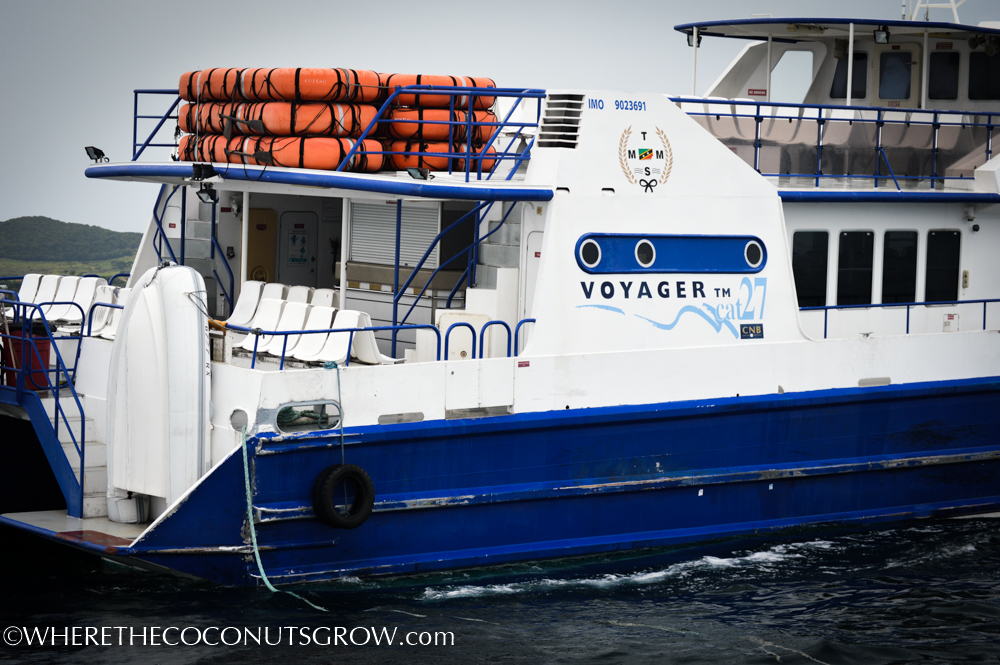 We hailed the marina again letting them know we were coming in to tie up and the diver promised to deliver the anchor to us at the marina.

After a few attempts to tie stern-to with our boat that doesn’t like to reverse, we eventually got the boat secured. Shortly after, the diver brought our anchor over as promised and helped Peter feed the chain back into our anchor locker. He didn’t locate the snubber but at least we got the anchor back free of charge!

We got a great deal at the marina and spent about a week recovering mentally from that ordeal. 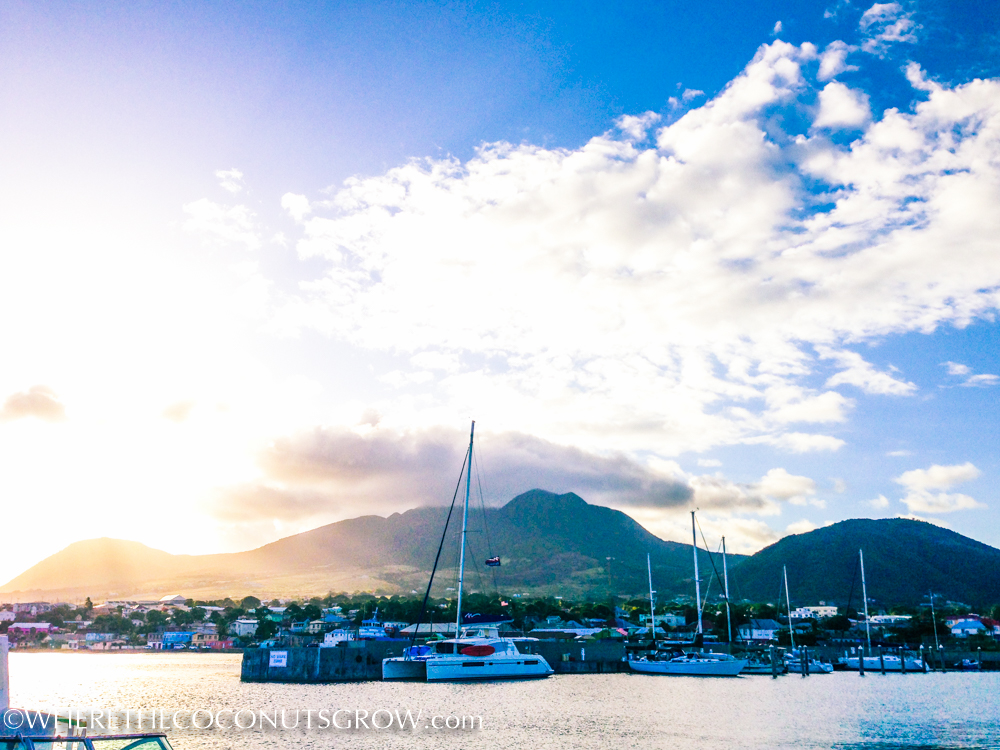 “My worst fear was having to cut the anchor loose in a squall,” Peter admitted. Back in the Bahamas we met some young guys on Humdinger that had to cut their anchor loose in an squall and their engine couldn’t overpower the current and wind. They ended up on the rocks totaling their boat and crushing their cruising dreams that had only just begun. Ever since we heard their story, it became Peter’s biggest fear. I still can’t believe it actually came true.

If only the marina staff had not gone home early… If we had just gone into the marina and found a place to tie up… But we’re safe now.

What’s your scariest moment at sea?? 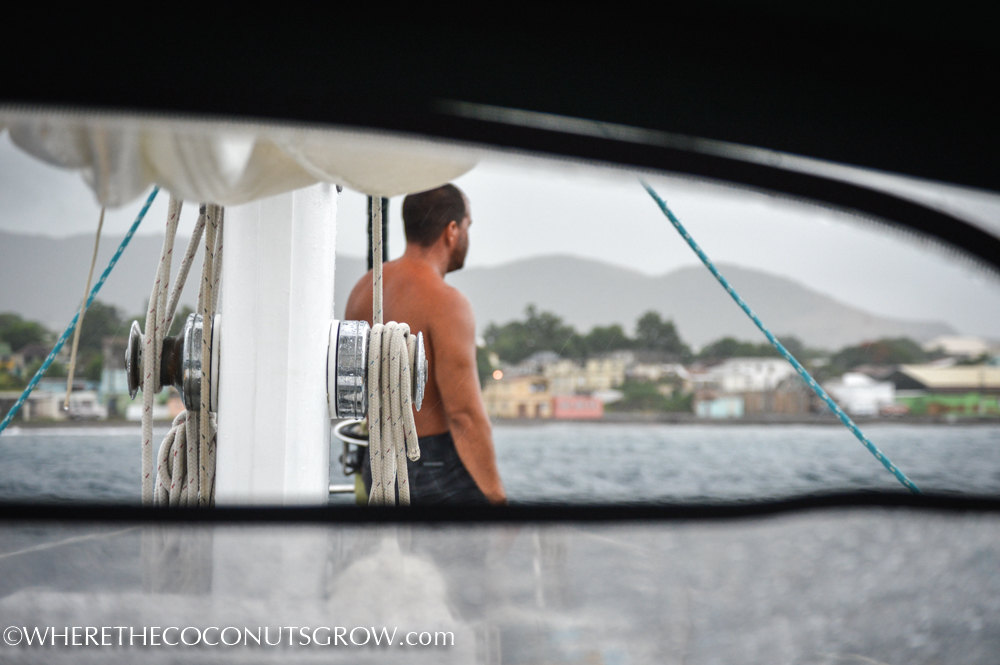