Thursday 2.13.14 we spent a good portion of the day putting the boat back together and cleaning up. We filled our water tanks, did some laundry and Peter fixed the anti-siphon hose on the generator. Turns out the boat right next to us on our dock used to cruise with the previous owners of our boat, Steve and Judy, all the time! Jon and Arline (SV Kasidah) probably know our boat better than we do :) What a small world! Jon helped Peter with the hose and they talked boats for awhile. Josh and Leah made a trip into town to grab some groceries while I stuck around the boat to finish laundry and write a few blog posts while I had wifi. Dinner that night was grilled steaks we bought at Costco before leaving Florida :)

Friday 2.14.14 Valentine’s Day – We left the dogs to watch the boat from inside the cabin and got a ride from a Bahamian man that runs the water company. He didn’t want us to pay him for the ride but we gave him a little anyway. He drove us to the east side of Great Harbour Cay down a dirt road. There were big houses scattered along the way with beautiful patches of countryside in between. 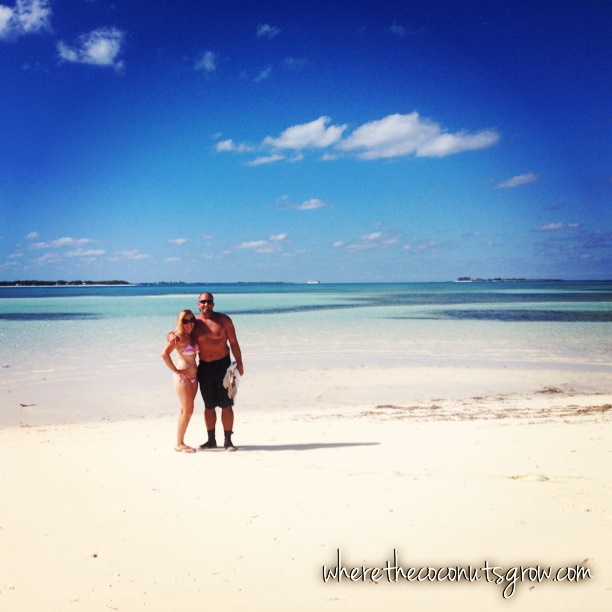 We finally arrived at a clearing in the trees that opened up to a white sand beach. Our new friend offered to come back to pick us up in a few hours so we entered his phone number into the sat phone so we could call him later. The water was the most gorgeous color of clearish turquoise and just barely covered the sand that extended out to a small island about a half mile away. 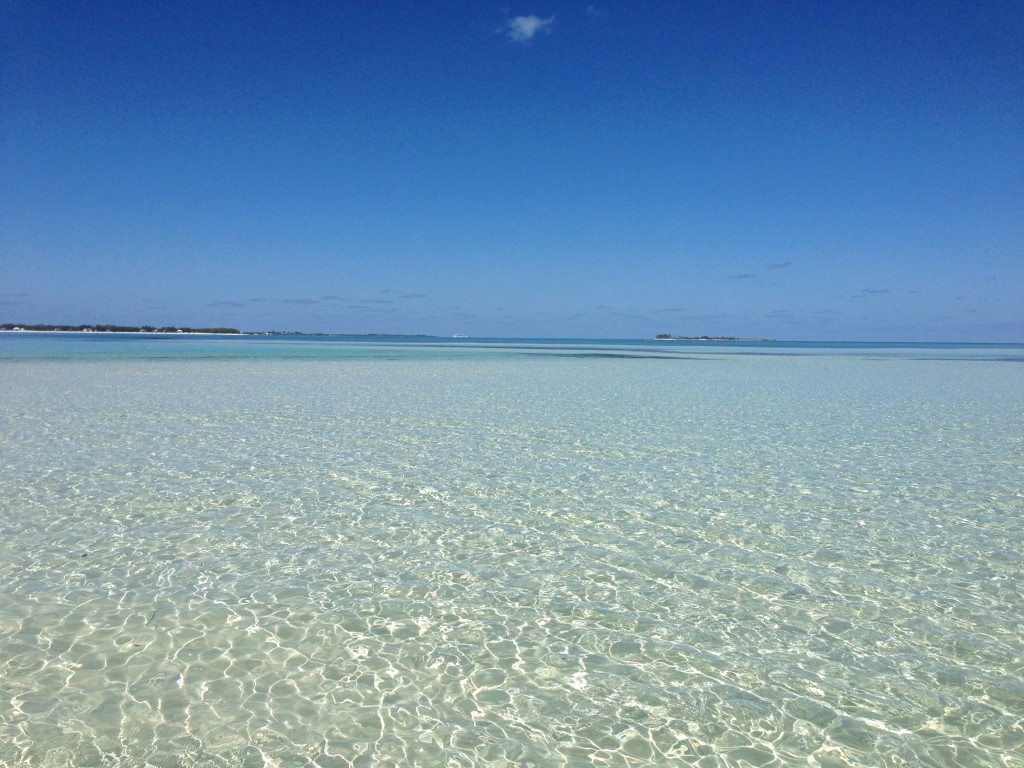 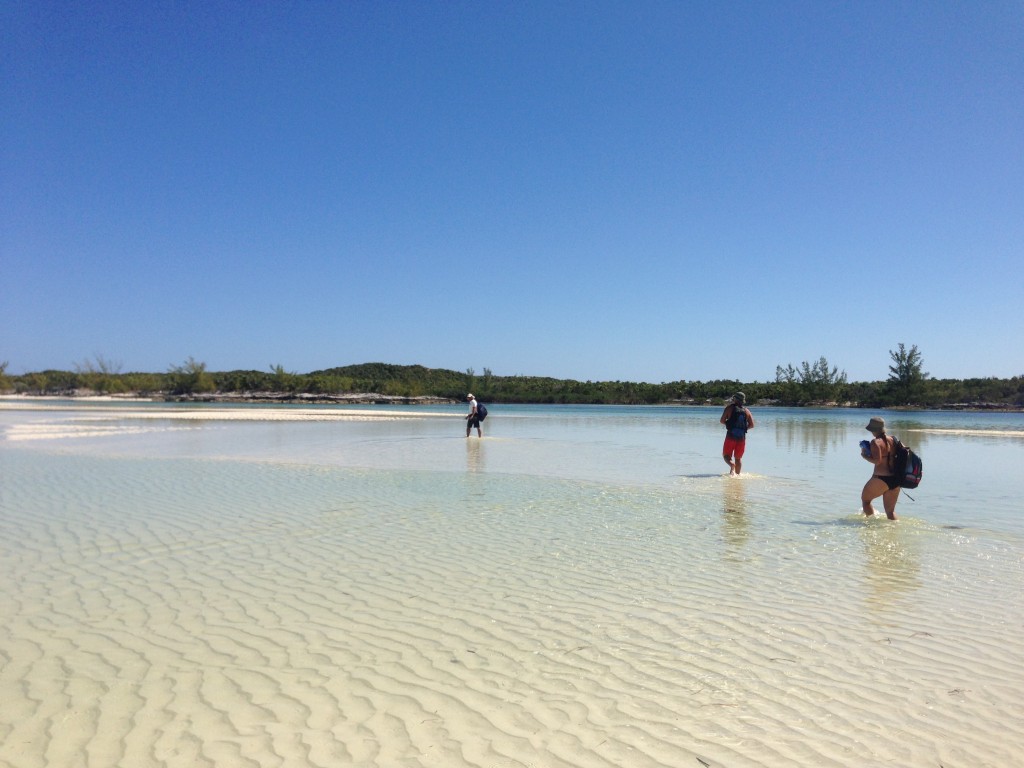 We began trekking across the sand bar towards Lover’s Beach. The current had carved out areas that were deeper than others and as we waded through, the water came up to our bellybuttons. We carried our beach bags, backpacks and dive bags up on top of our heads like they were precious baskets of water being brought back to a village. 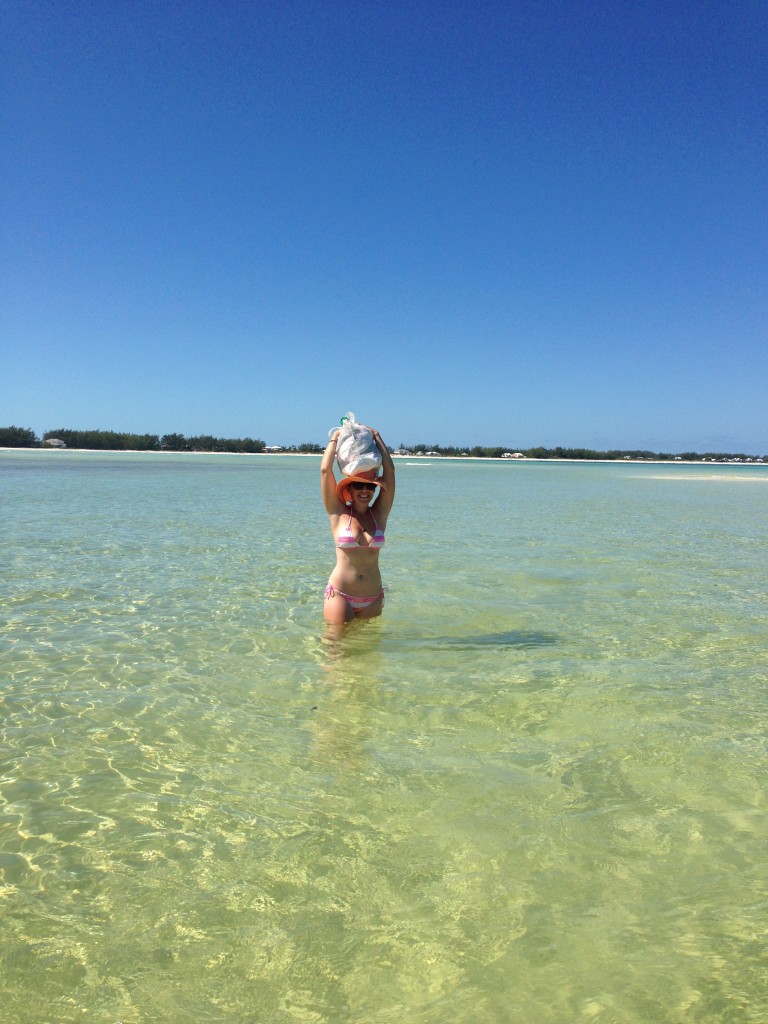 The sand was soft beneath our toes and there was only a tiny bit of sea grass and urchins in the water to carefully step around. On the other side of the sand bar I found my first whole sand dollar!! 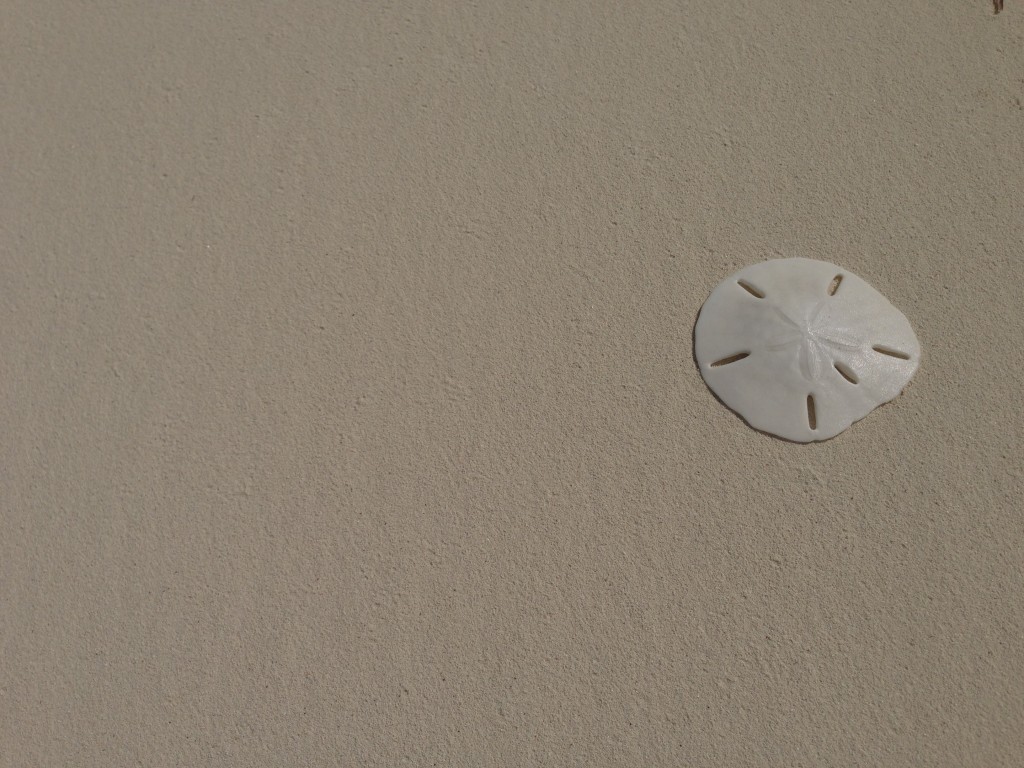 The cove in front of us was what dreams are made of. The many colors of the water here in the Bahamas are so surreal. 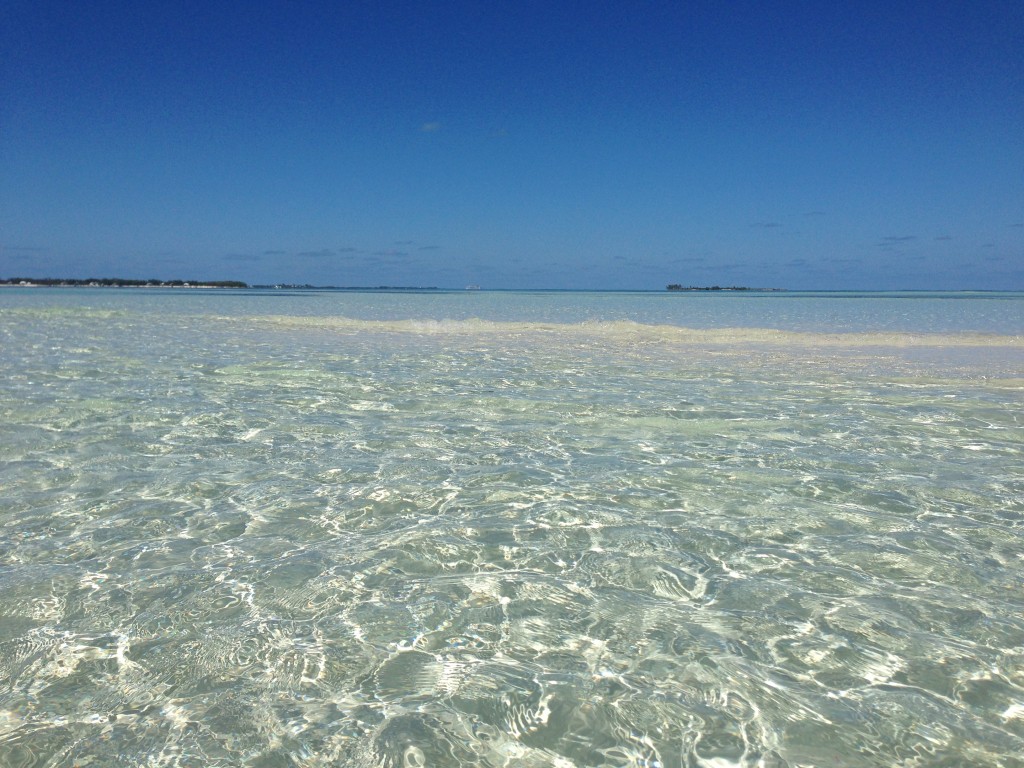 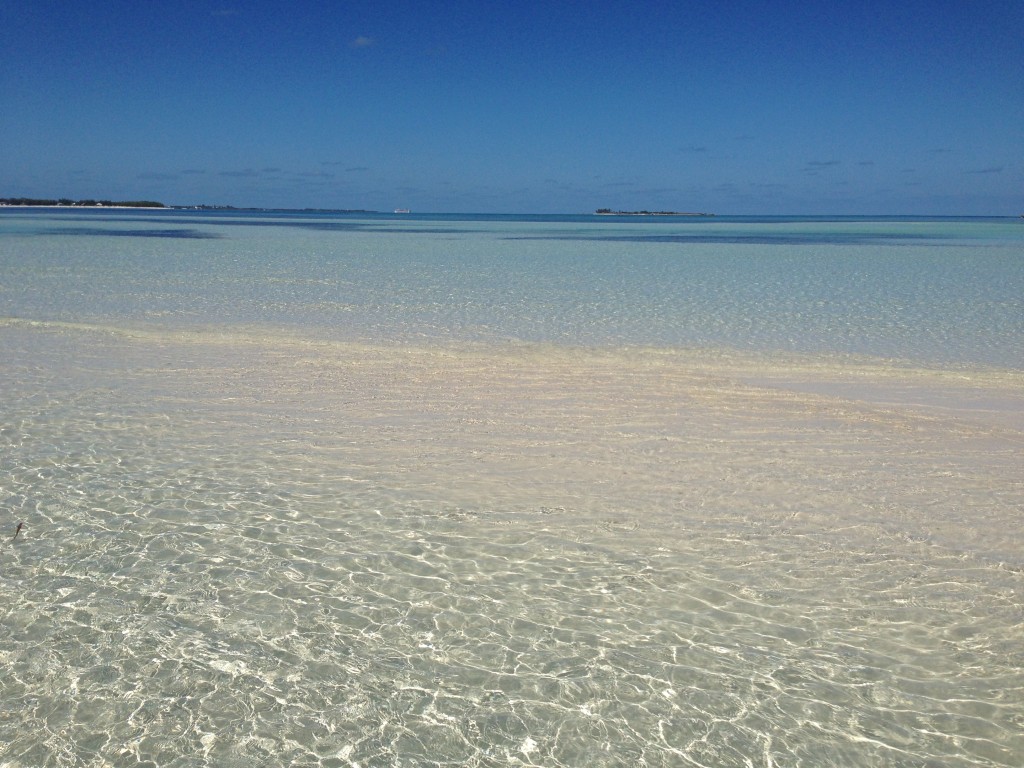 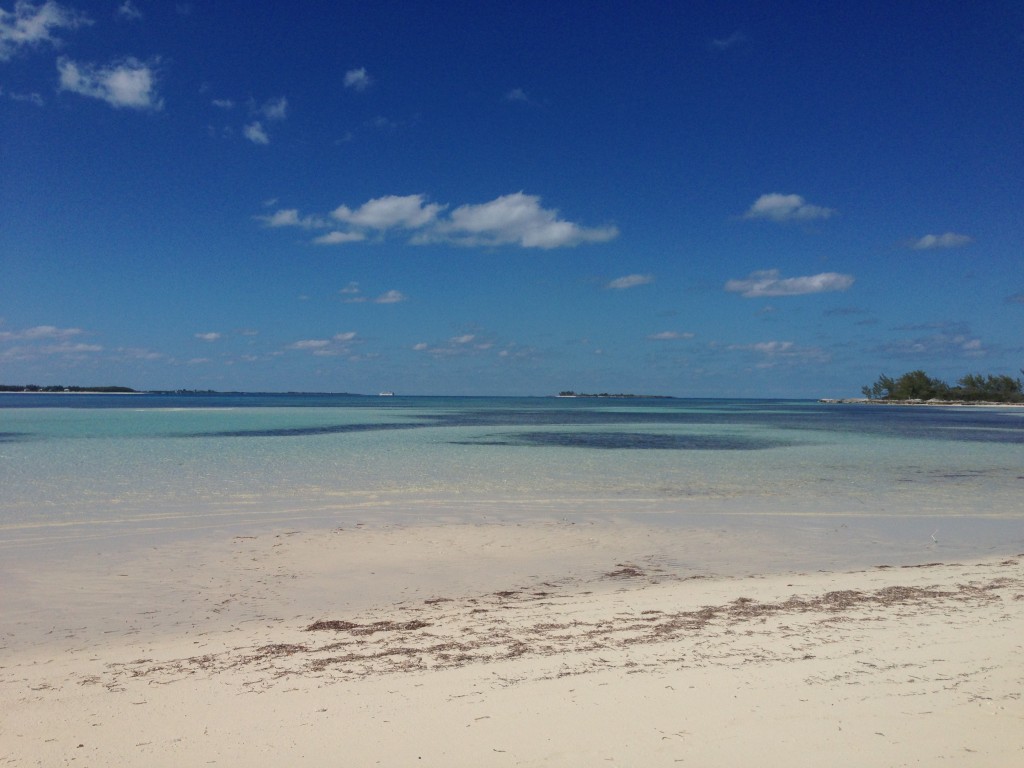 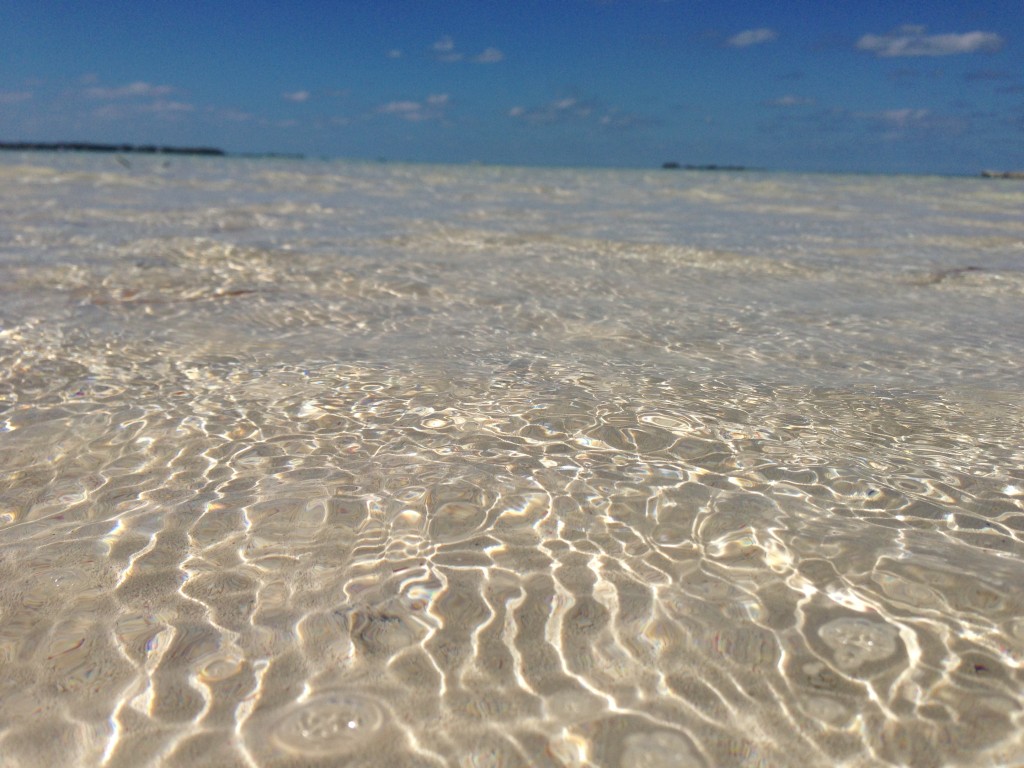 We walked a little further around the point where Peter and Josh could go diving for lobster. It was very rocky and sharp on that side of the island where the waves had eroded away the lava rock. As we set down our bags Josh saw a bunch of coconuts growing behind us. He took one of the Hawaiian slings to knock down a couple coconuts. We really are WHERE THE COCONUTS GROW! Leah had no trouble busting one open on a lava rock. The water inside was like a taste of heaven. It was so refreshing on a hot day and definitely helped rehydrate us all. Livin’ the dream :) 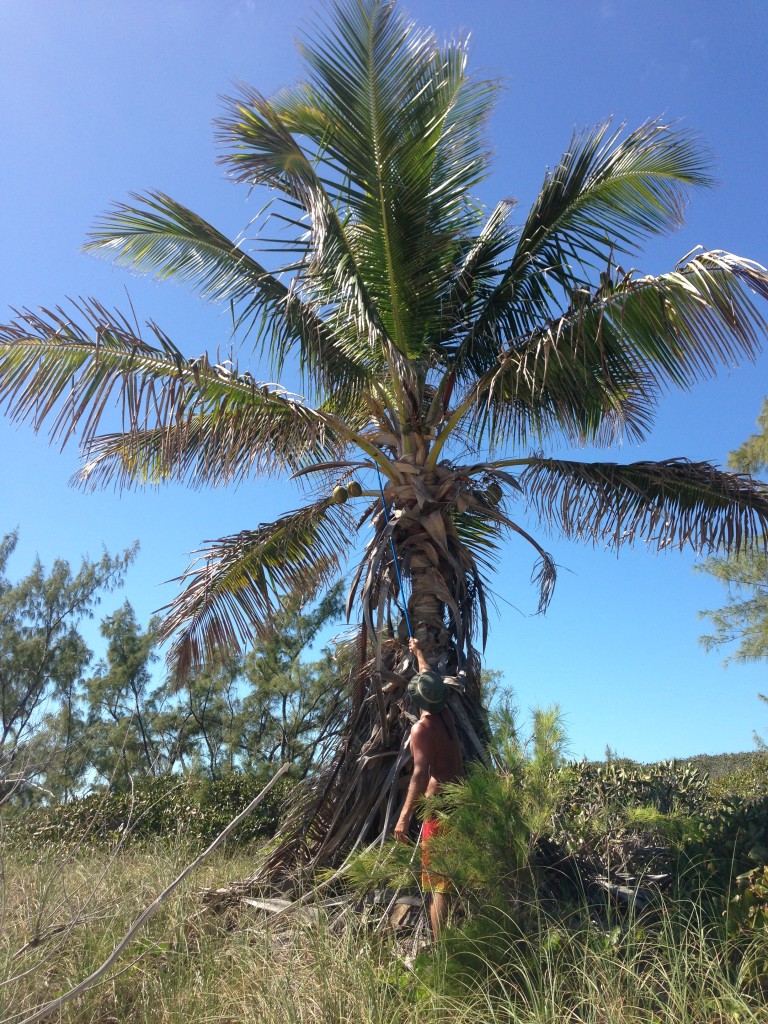 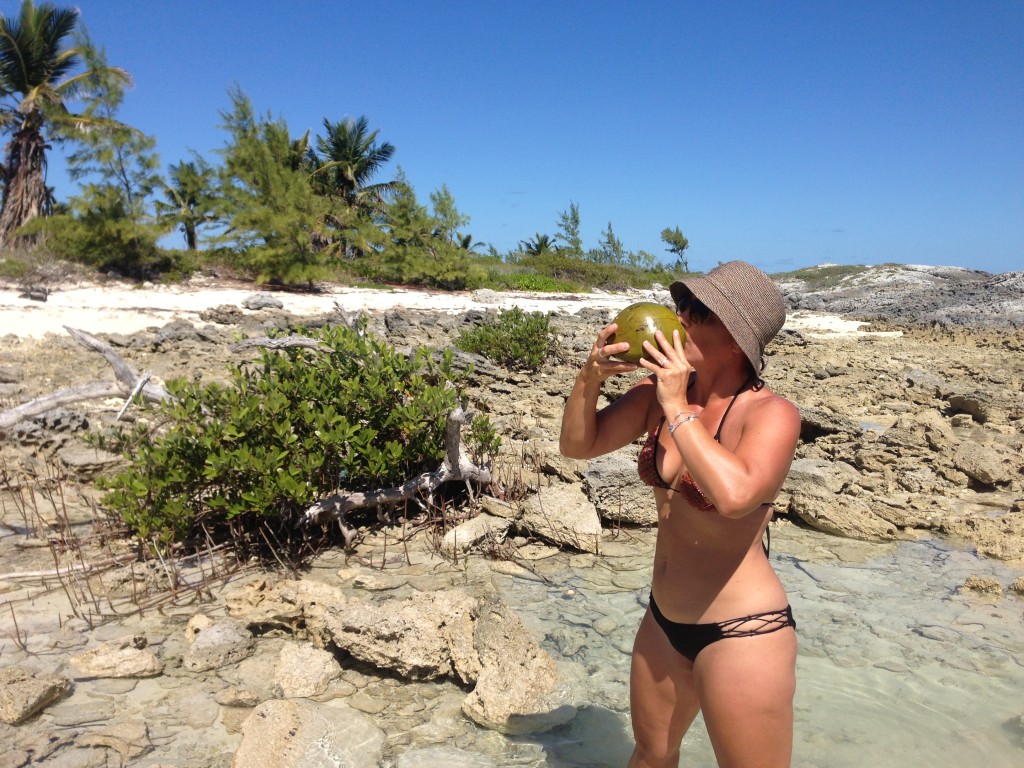 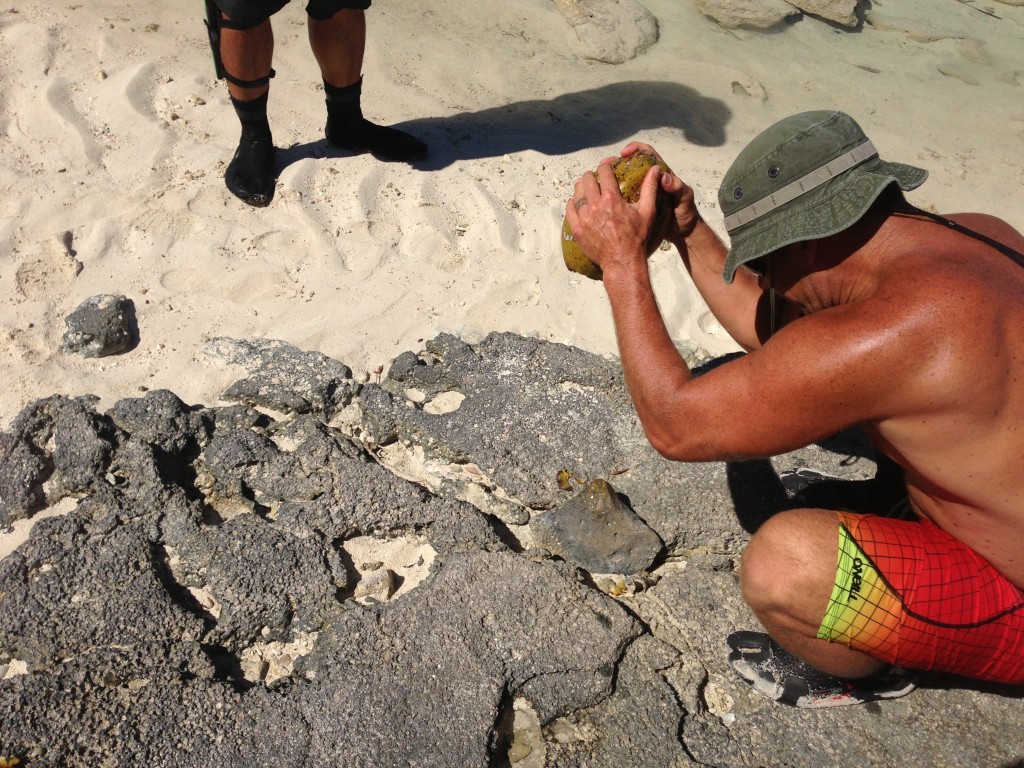 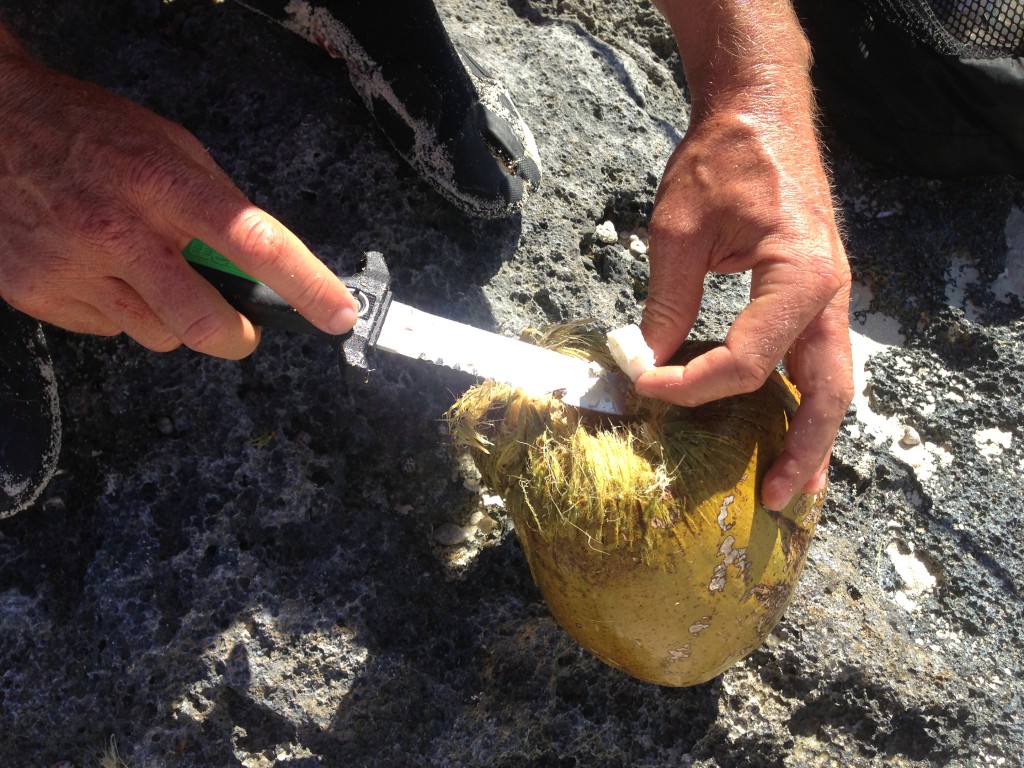 The guys went out diving and Leah and I put our masks on and checked out the shallows on the inside of the cove. Eventually Josh came back to bring Leah and I out to where the guys were diving. Leah had on her Nikes and I had my fins. We put on our masks and snorkels and started exploring the underwater world in front of us. We saw pretty bright blue reef fish and colorful coral up and down the valleys of white sand. We wished we had brought our underwater camera! Unfortunately there were no lobster here or anything else to spear but we had a blast snorkeling around anyway.

After awhile a while sand beach appeared on the shoreline as a signal it was time to come in. I was the only one without shoes or booties so I carefully climbed over the lava rock barefoot. Just call me Jody Lundin! (one of our favorite TV shows back on land is Dual Survival with Cody Lundin. Everywhere he goes, he is barefoot. He treks through the most dangerous places to survive like the Amazon, Sahara and Alaska wilderness) 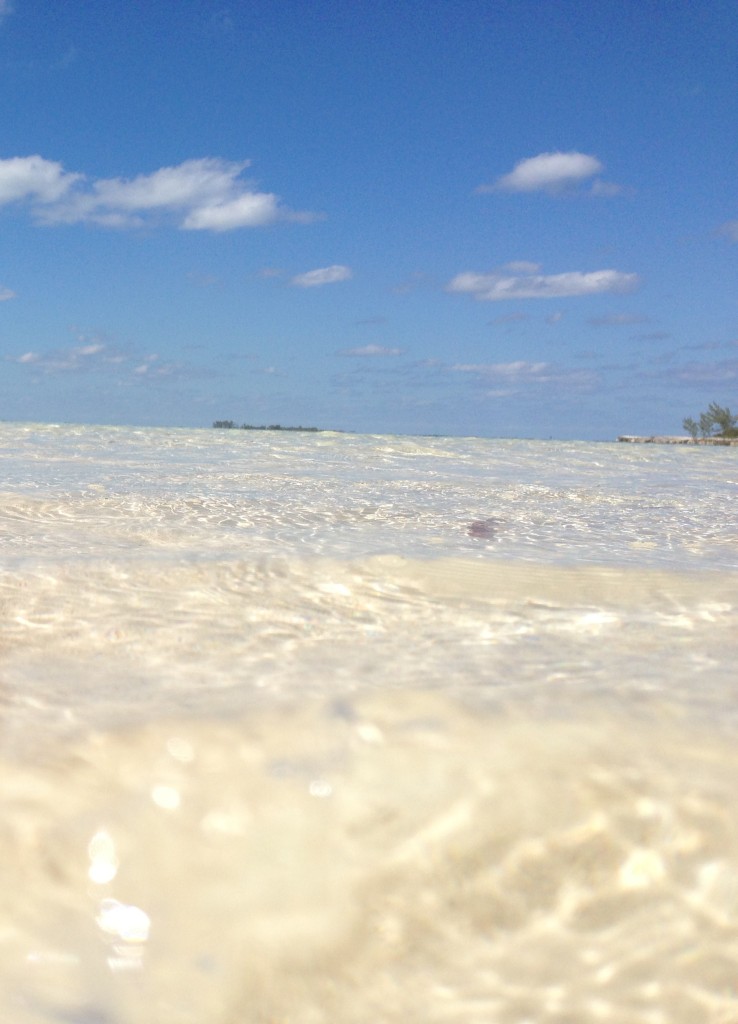 Back where our dive began, we brought out peanut butter and jelly sandwiches and some fresh tangerines that Jon and Arline gave us. After lunch we trekked back across the sand bar. Along the way we found dozens of sand dollars in a path back to shore, almost like a yellow brick road. 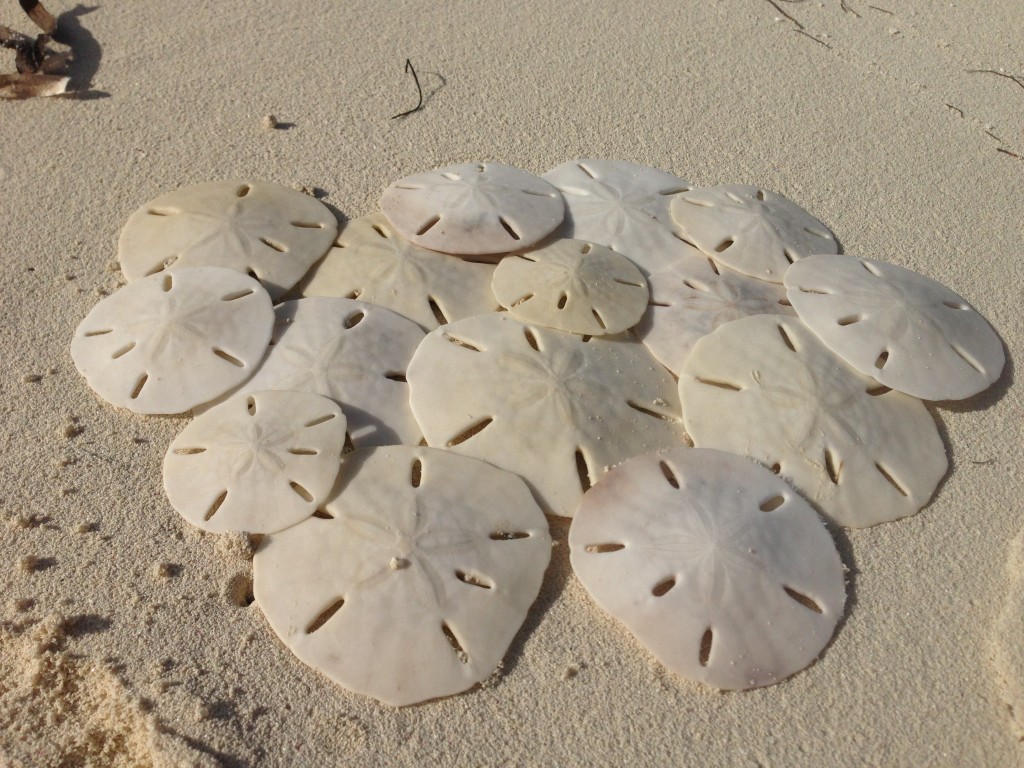 While we waited for our Bahamian friend to pick us up, Peter and I walked up the riverbank a little bit and saw a lionfish in the seagrass. Those suckers really are everywhere now. Crazy how fast they have become an invasive species. They carry a wicked toxin and have killed off much of the existing reef life.

Can you see the lionfish? 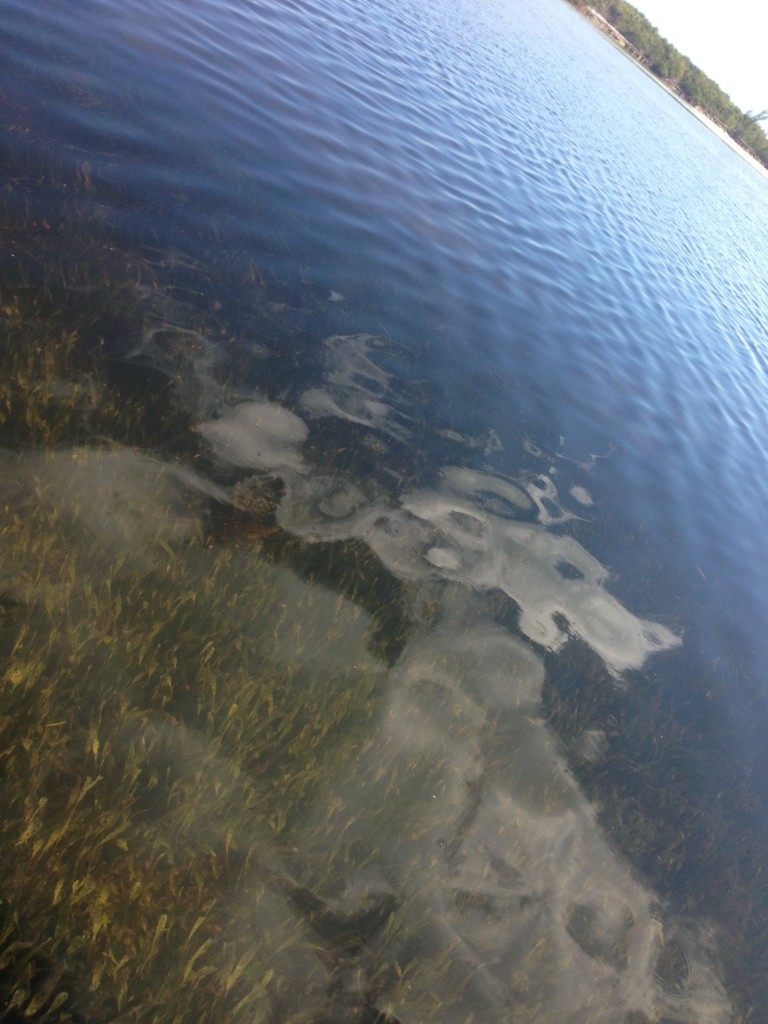 We also saw a starfish close by. First one of the trip! 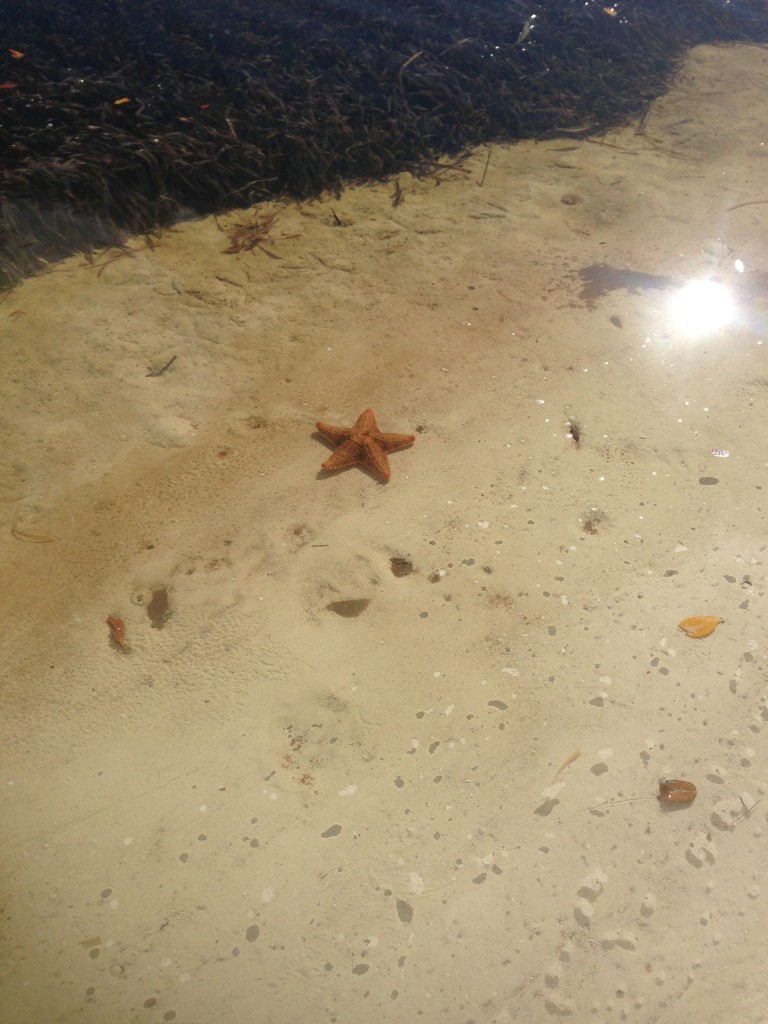 When we got back to the boat we had to break the news to Jon and Arline that we didn’t have any lobster to contribute to the BBQ we had planned for that night. Jon was making his conch fritters. Luckily, the guys from the fishing tournament gave us a huge filet of King Mackerel. Peter served it up sashimi style. Holy crap that was good!!! Nothing like fresh sushi straight out of the ocean. We all crashed hard that night after a long day. 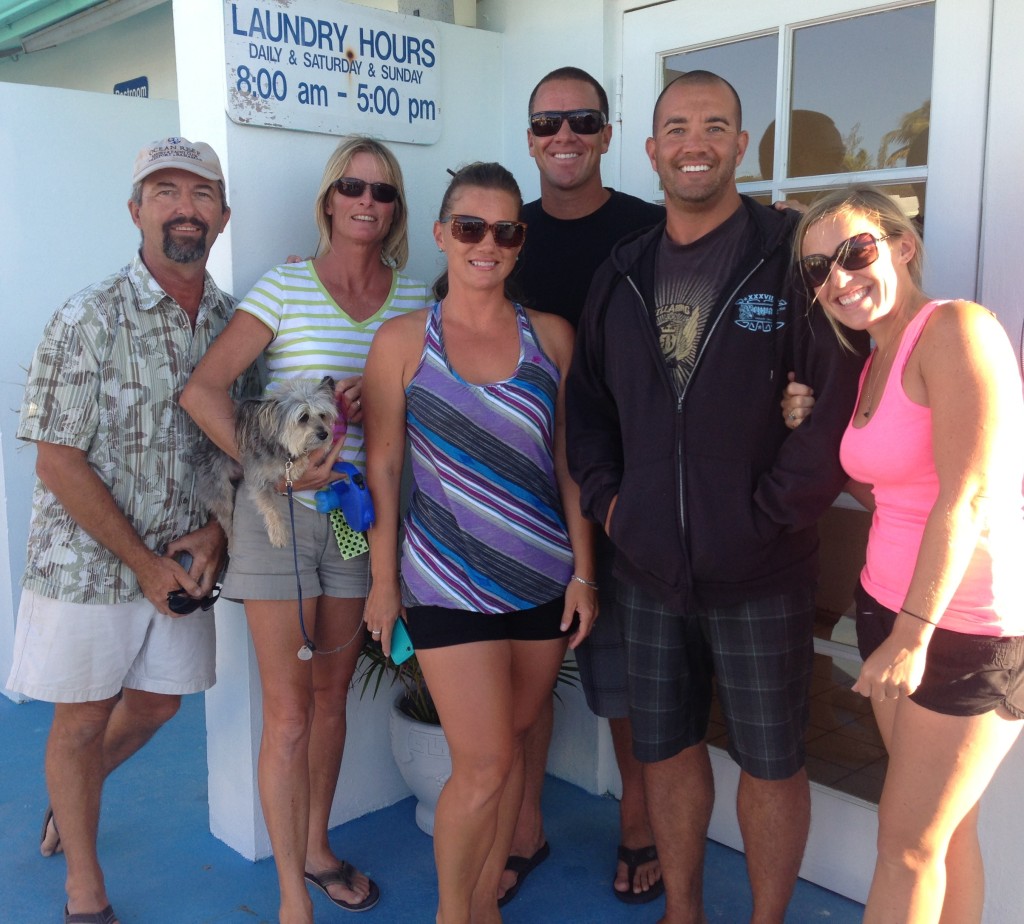 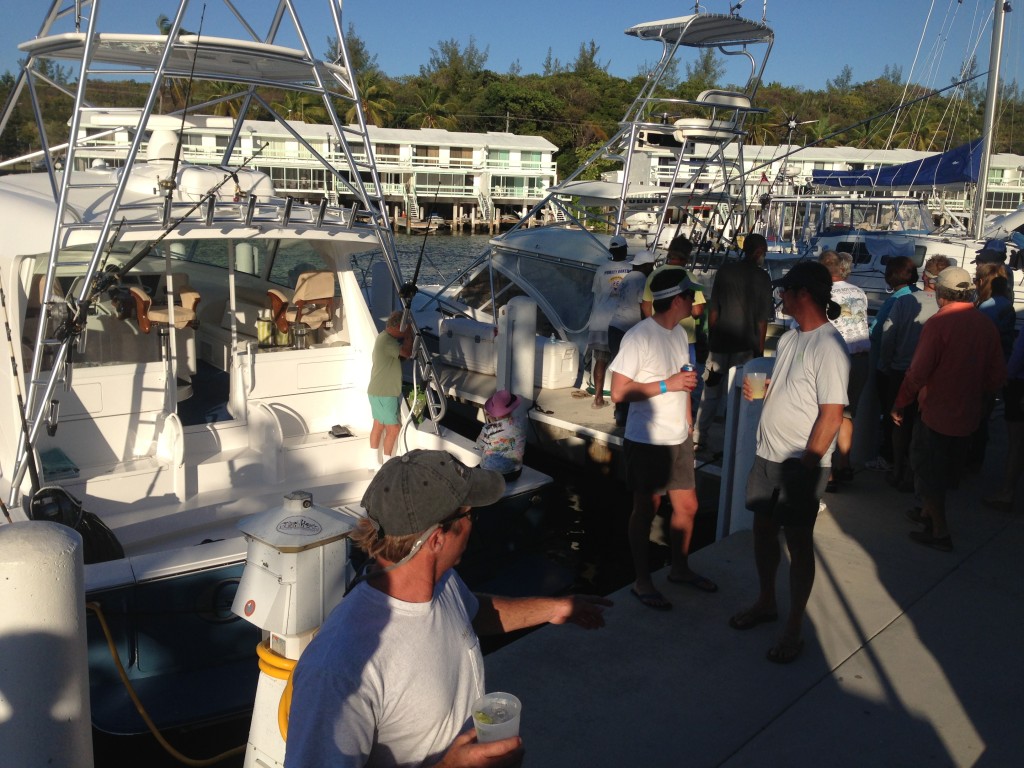 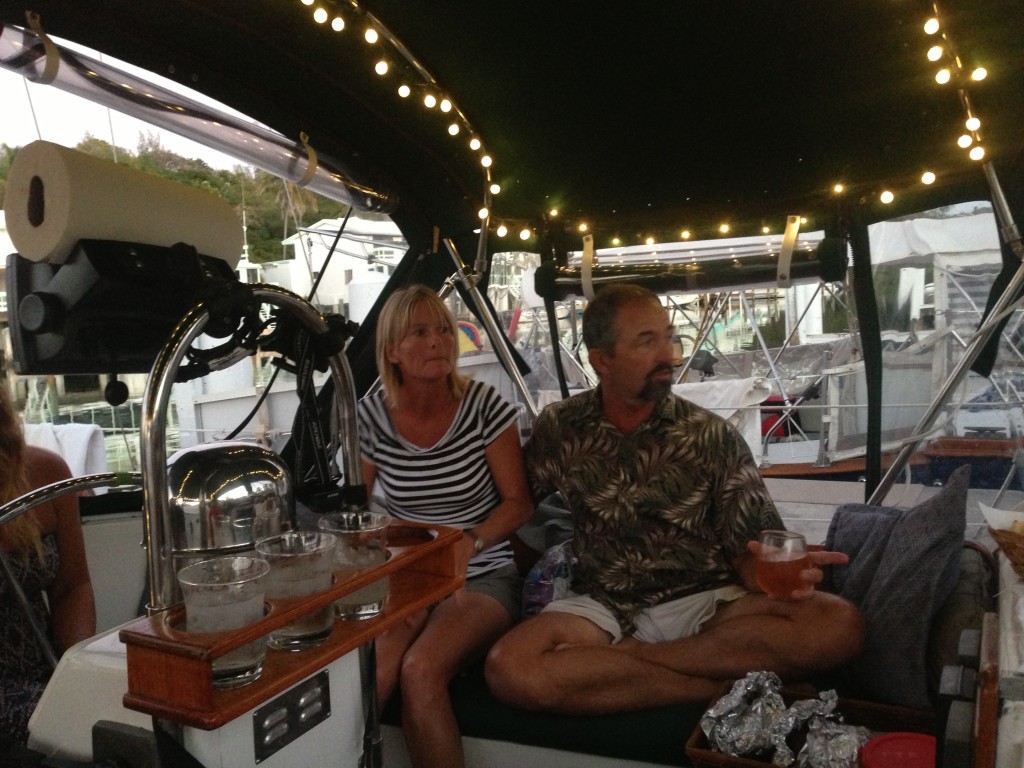