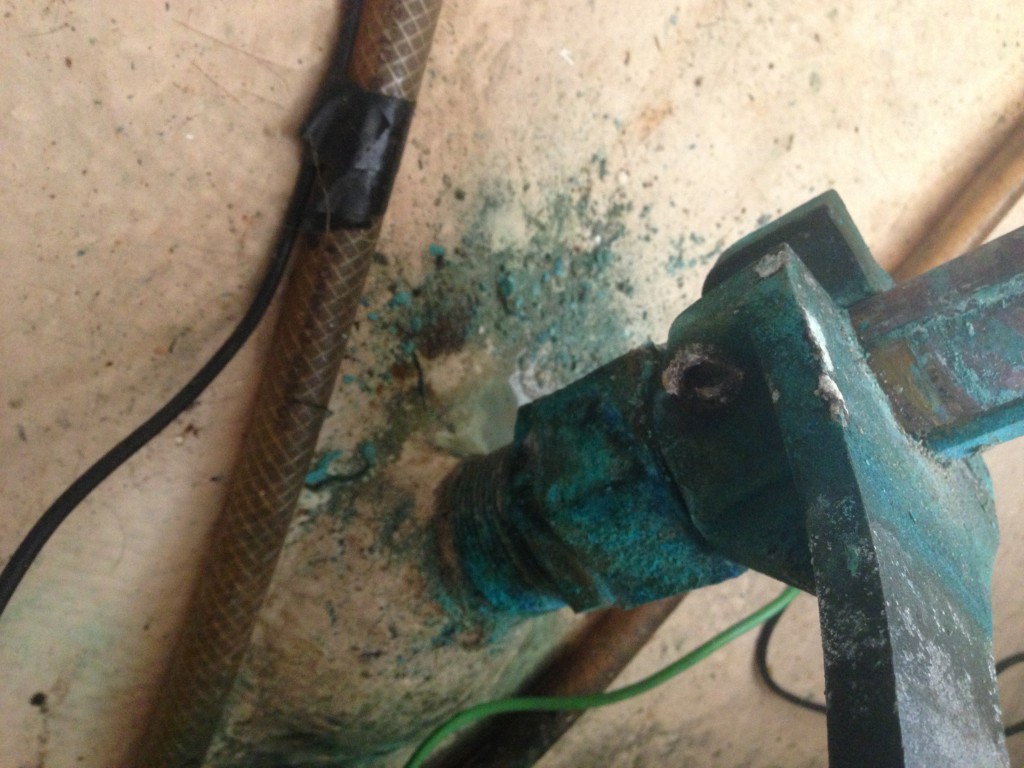 Saturday afternoon, 2.8.14, we began to stow everything away to head back to Brown’s Marina. The water tanks needed to be topped off and we needed to fix the leaking bladder tank. The anchor went up without any trouble and we began to navigate away from the adjacent sand bar. Suddenly, it was very apparent to everyone that we had NO STEERING!! The current was strong, but there’s no way it could be strong enough to counteract our steering all together. The rudder position moved back and forth clear as day in the autopilot gauge but the rudder itself was just not moving.

In a panic to stay off the sand bar that was almost underneath us we let out the Genoa to the port side to catch enough wind to turn the bow in the direction we were trying to turn. With the help of our trusty prop walk to starboard in reverse (she only goes to the right in reverse no matter which way you steer) combined with full sail to port, we got back to our original location and quickly dropped the anchor again.

Peter dove off the back to see if the rudder moved at all as the wheel turned and to see if maybe it was hung up on something. Negative on both. There were no obstructions and it was no longer connected to the steering mechanisms.

Immediately, Peter told me to go get the emergency tiller arm. The previous owner, Steve, had it strapped inside the corner of the forward hanging locker with old, crusty and almost disintegrated bungee cords because they had been untouched for so long. This is one of those things that you haul around with you ‘just incase’. It’s a massive two-part aluminum pipe that could double as a weapon if we were feeling barbaric.

I scrambled to lift it up through the companionway into the cockpit and bring it out to Peter where he needed to insert it through the hole in the aft deck. It runs diagonally down into the aft cabin. The mattress had to be pulled off to access a removable board covering the hydraulic steering arm that connects to the rudder. We had the emergency tiller all ready to attach and then… BINGO! That was it! One of two bolts holding the top of the arm in place was completely busted off. With it just hanging there, the hydraulic steering system was unable to grip and turn the rudder. We were lucky it was only a bolt and nothing worse. The second bolt had bent a bit from the force of keeping it all together but it kept holding. There had been a grounding wire attached to the bolt intended to diffuse the electrolysis in the water and had completely disintegrated the bolt from the inside out. Guess it should have been placed somewhere else :( 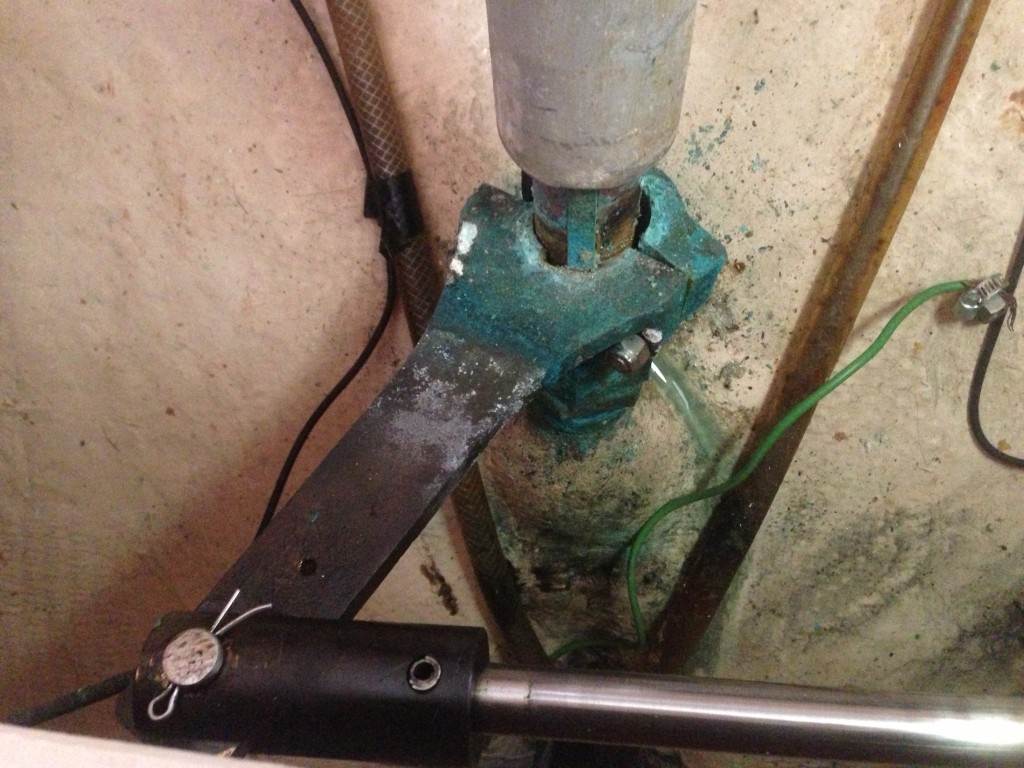 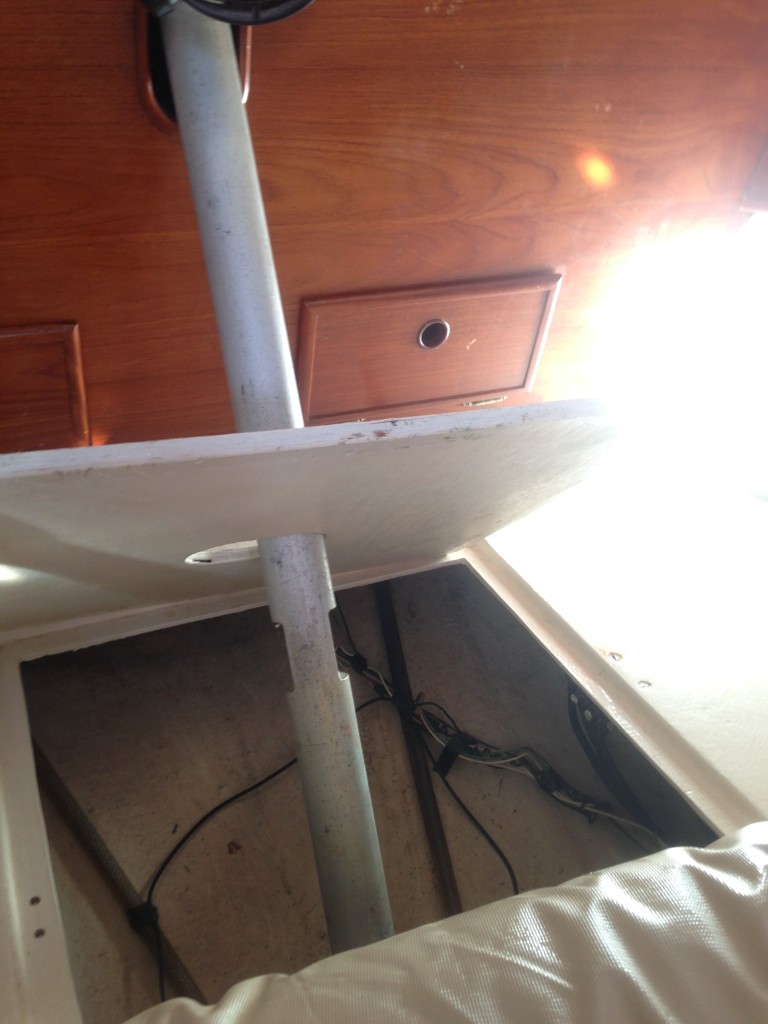 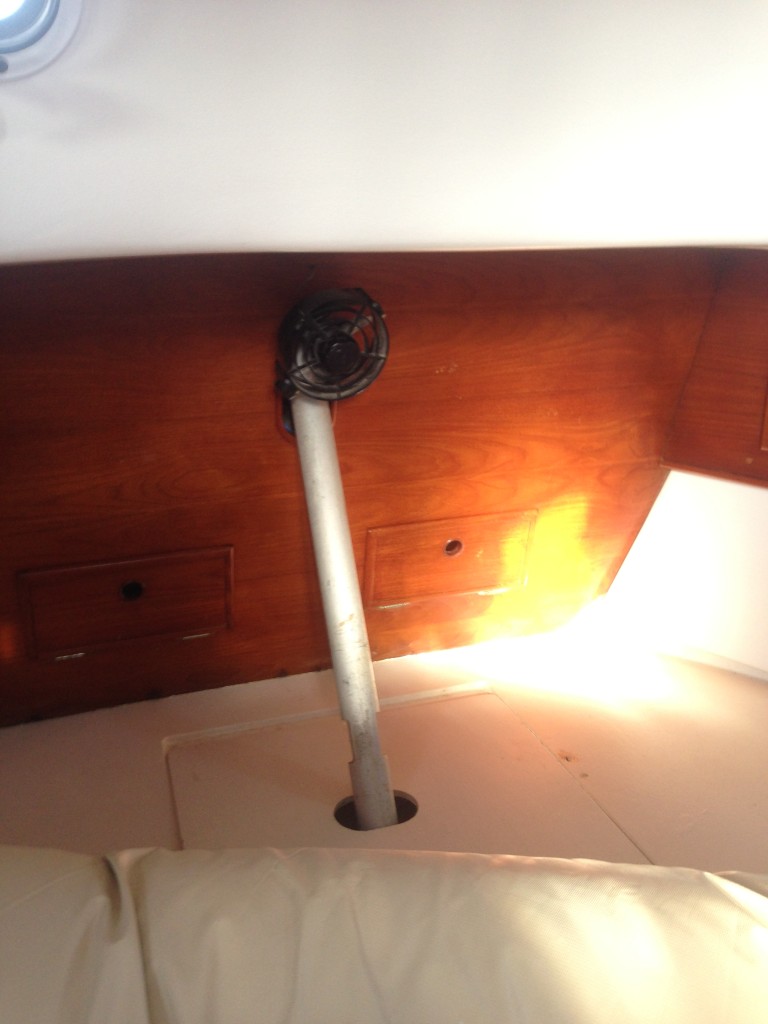 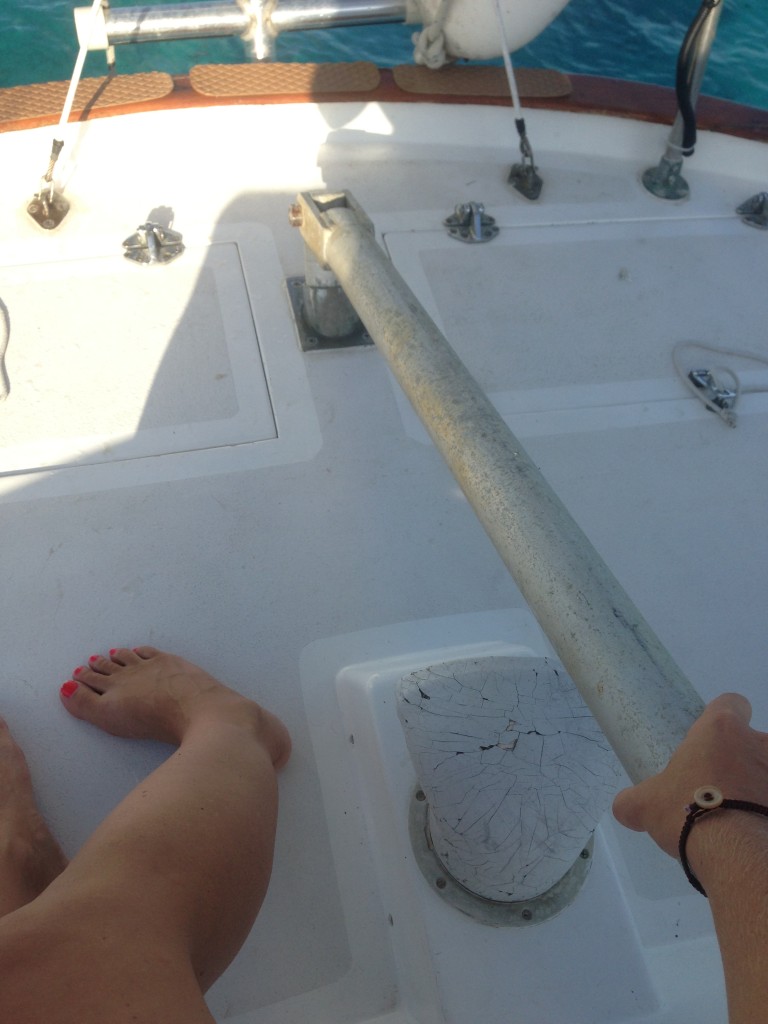 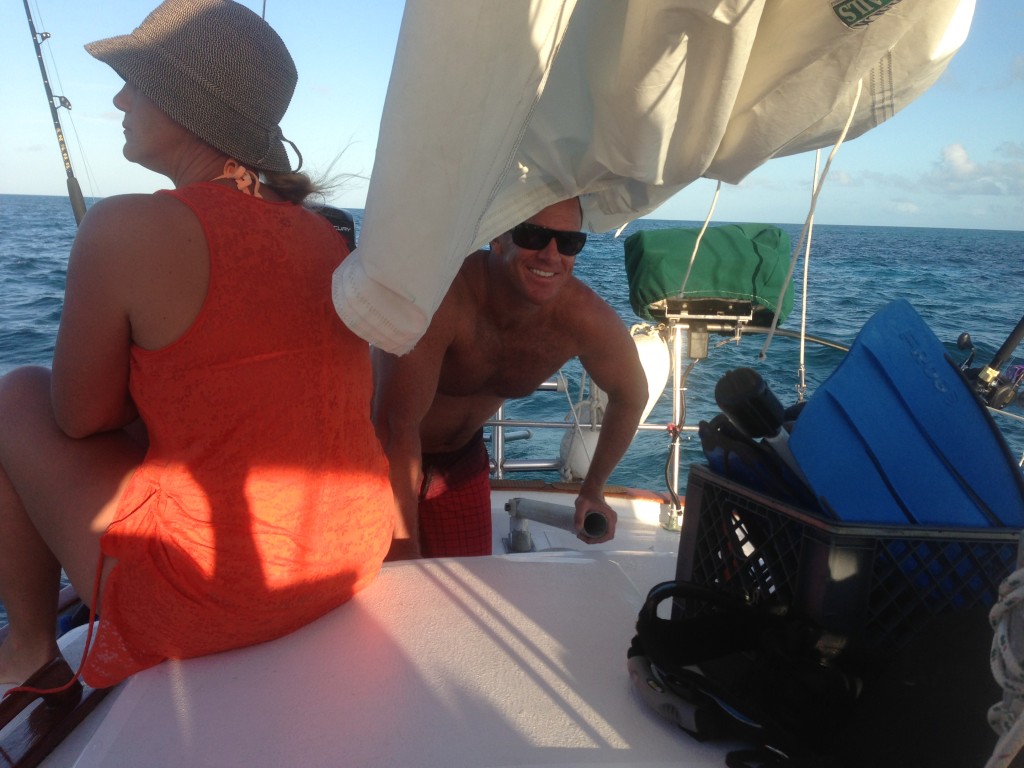 We made it back to Brown’s Marina two hours later. Josh steered us all the way with the emergency tiller arm while Peter navigated from the helm. By the time we arrived, it was already dark and the current was whipping through the channel as usual. It was past closing time so no one at the marina answered our call on the VHF radio. We tucked in on the outside of the dock behind a catamaran in the only space that was visibly available to us at the time and hoped someone would come out to help grab a line. It took two tries but the Mary Christine was finally tied back up at the dock safe and sound for the night.

We were all exhausted so we tied up the dogs in the cockpit to guard our home and walked up the road to Sherry’s for some dinner. It was a decent local meal but way overpriced. The bill was $100 for four people for some fish and lobster plates. After our minor disaster, it was worth not having to make dinner. Plus we got to relax in a super cute little beachfront patio. 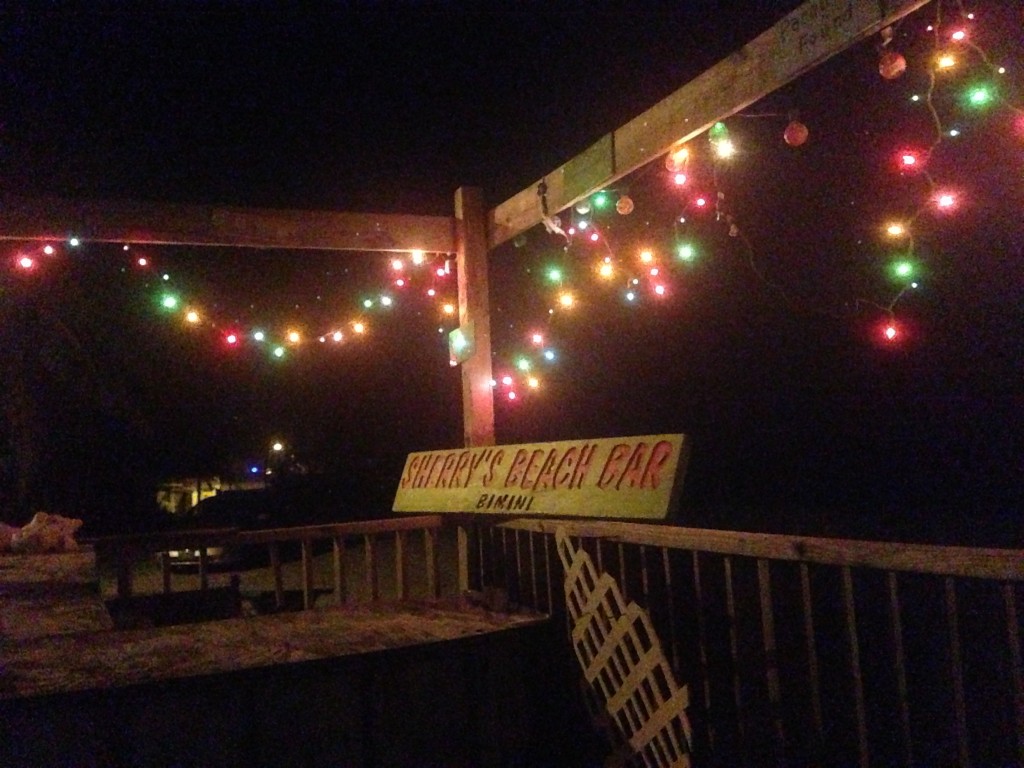 Back at the boat everyone at the dock was wondering what had happened. With the help of new cruiser friends John (S/V New Moon) and Alex (S/V Nikimat), Peter was able to put a new temporary bolt in, reconnect the hydraulic steering arm, and they even temporarily fixed a leak at the stuffing box packing nut. Before they made the fix Peter borrowed John’s 4lb hammer and used a screwdriver to pry off the emergency tiller arm. It had to be done that night or Peter and I wouldn’t have anywhere to sleep.

We spent that Saturday night 2.8.14 and Sunday night 2.9.14 at the marina. Betsy had been confused and shamefully peed on one of the cockpit cushions while we were underway coming back from North Rock. Poor thing. It was just too hectic when we lost our steering. Sunday we cleaned the boat and did a tiny bit of laundry. The cockpit cushions and covers got washed on the dock and the guys did a soap test on the water tank bladder to see if they could find a leak. That night we grilled some steak and lobster with our neighbor Alex. It was a nice relaxing evening before casting off the docklines  again in the morning… 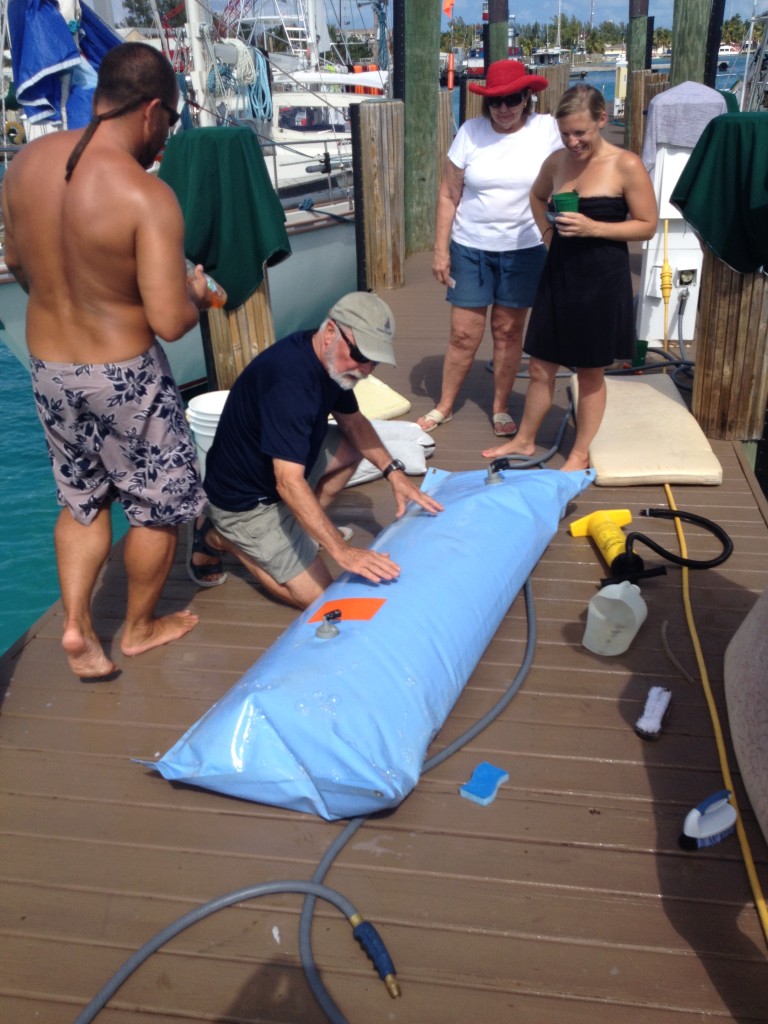