Year after year, cruisers like ourselves sail south from the East Coast of the U.S. and make our way toward the Caribbean. We brave the swells, storms, currents and Trade Winds planning our every move around weather windows. The North Coast of the Dominican Republic is by far the roughest leg of the journey and many often sail right past it jumping off from Turks and Caicos and arriving in Puerto Rico.

We decided to take what old salts like to call the “Thorny Path to Windward” fighting the cape effects and coastal acceleration sailing dead into the wind as we make our way East. We followed Van Sant’s guide, or what he likes to call the “Thornless Path to Windward,” all the way across the North Coast of the DR and we are forever grateful for his wealth of knowledge. Most helpful was his suggested itinerary for departure and arrival times at various points along the coast. With a few minor tweaks on the departure times, Van Sant’s itinerary saved us from getting beat up on the near 300nm journey from Luperón to Puerto Rico.

Ready to say good bye to Luperón, Peter and I went into town one last time to get our despacho before the Navy building closed at 5pm. The DR is very strict about being cleared in and out of each port of call, inspecting yachts in transit for any illegal stowaways. We made sure to ask the officials to document that our next stop would be the next major port of call, Samana. It’s okay to stop along the way for weather and resting, but any officials we might have encountered would need to see that we were properly cleared out of Luperón and our next destination is recorded as still within the country. If we had declared that our next stop would be Puerto Rico, but we had stopped again along the DR coast, we would have been checked out of the country already and in a heap of trouble with the local authorities. If we don’t stop at Samana, it’s no big deal. Puerto Rico doesn’t care to see the despacho at all.

The Navy officials were willing to process our paperwork at 4:30pm since we told them we were leaving within the hour. If we were not going to leave right away, they wanted us to wait until the next day and come back to get our despacho then. Conveniently, the officer was not able to get ahold of anyone that could come out to inspect our boat since everyone had gone home already. He processed our despacho, shook our hands and sent us on our merry way.

Peter and I had no intention of leaving at 6:00 in the evening, knowing the Trade Winds were surely still piping outside the harbor with less than friendly seas pummeling across the entrance. Didn’t they know who Bruce Van Sant was? He lives in Luperón for crying out loud!! Hadn’t they dealt with thousands of other cruisers following Mr. Van Sant’s recommendation to leave at 4am? Apparently not.

Around 2:00 am I untied the lines and made my way out to the bow with a spot light. Peter carefully motored through the mooring field navigating around the mud shoals as I shined the light on approaching boats and vacant mooring balls. The twinkling of anchor lights in the harbor pierced the thick darkness of the night blending in with the stars up above. The flat calm waters quickly disappeared as we followed our tracks back out through the channel. The waves grew bigger and bigger.

Just then, in the darkness behind us, I saw a light. It was a small boat with several men in it and they were headed right for us. Their outboard motor was at full speed and they were going over the waves almost vertically. Not a single one of them spoke English. They were screaming at us and telling us to turn around. It was 2am in the darkest of nights with huge waves coming straight toward us and we happened to be in the narrowest part of the channel. With a cliff to our starboard and a dangerous shoal to our port, they insisted that we turn around that instant, not even a little bit further.

I quickly scrambled down below and grabbed our despacho and held it with two hands out the side of our cockpit trying to show the men that we had clearance to leave that day. They were very suspicious and tried to board our boat. I waved the despacho at them again, reaching my arms as far as they could go without falling out of the boat. I was trying to block their entrance to board us while showing them we had valid documentation. Thank God I had it in a clear plastic sleeve (like the kind we used to use for book reports in elementary school). The waves were slamming up against the boat spraying saltwater everywhere. They took it from my hands to examine it closer. The men were on radios trying to reach someone. Peter was busy trying to navigate the boat so he couldn’t pay attention to what they were saying. The dogs were barking, the wind was howling, the waves were crashing against the cliffs and we were relying solely on our chartplotter and radar. It was quite possibly the scariest moment we’ve had so far.

After Peter got the boat turned around he attempted to idle in the tiny area the current had pushed us towards. Anyone that has a Whitby knows these boats DO NOT turn or back up, especially in tight places, and with 3-4′ waves pummeling the beam. What seemed like 20 minutes later, they let go of the side of our boat and in a confusion of broken Spanish, they finally told us it was okay. “Adios?” I screamed. “Si, Si, Adios!” they chuckled back.

Were they absolutely insane??? That was the worst possible moment to approach and tell us to turn around. Peter’s excellent Captain skills got us out of that mess safely, but it sure was scary.

We arrived in Sosua around 7am on May 2nd after taking advantage of the calmer night lee winds. After 8am is when the winds really pick up and we took Van Sant’s advice and made sure we were securely anchored before then. We dropped the hook inside a reef with waves breaking just 200′ from the boat. That may seem like a good distance but when 8′ waves are breaking on either side of you, it’s kind of unnerving. There weren’t any options for staying out further due to a significant dropoff past the reef. Van Sant had also said to not travel or anchor here in a North swell but in order to make an amazingly calm 3-day window for crossing The Mona Passage, we had to traverse the DR coast on a schedule.

Music blared from the beach all day and vacationers zipped around on a huge inflatable banana towed by a little fishing boat. Paddleboarders were surfing the shore breaks and kids were swimming in the shallows. We tried to get a little rest during the day in preparation for the next departure later that night. 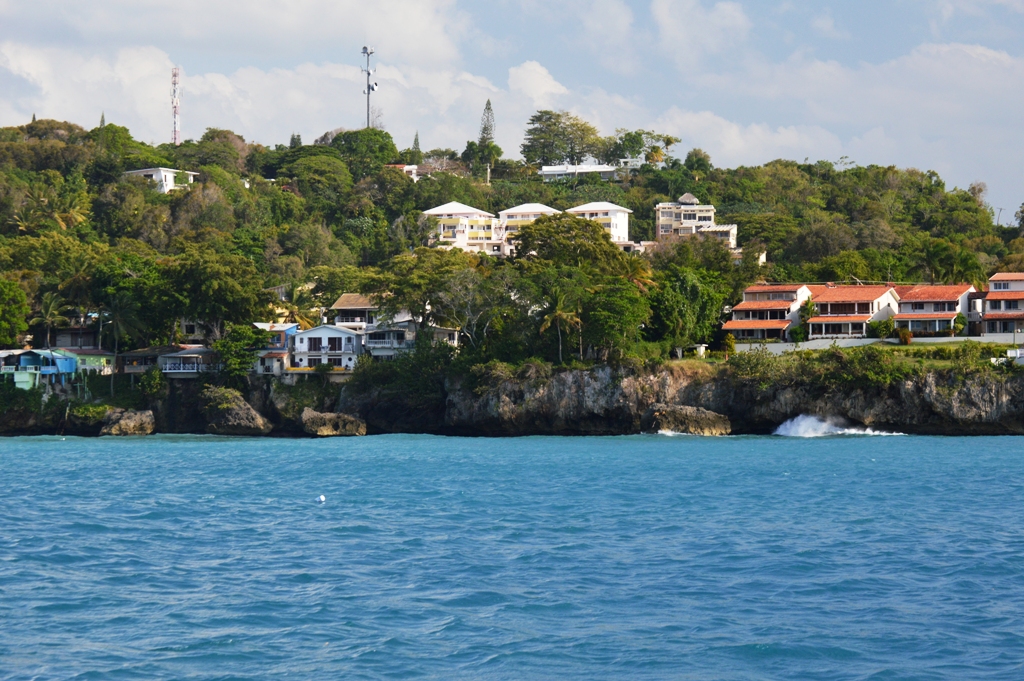 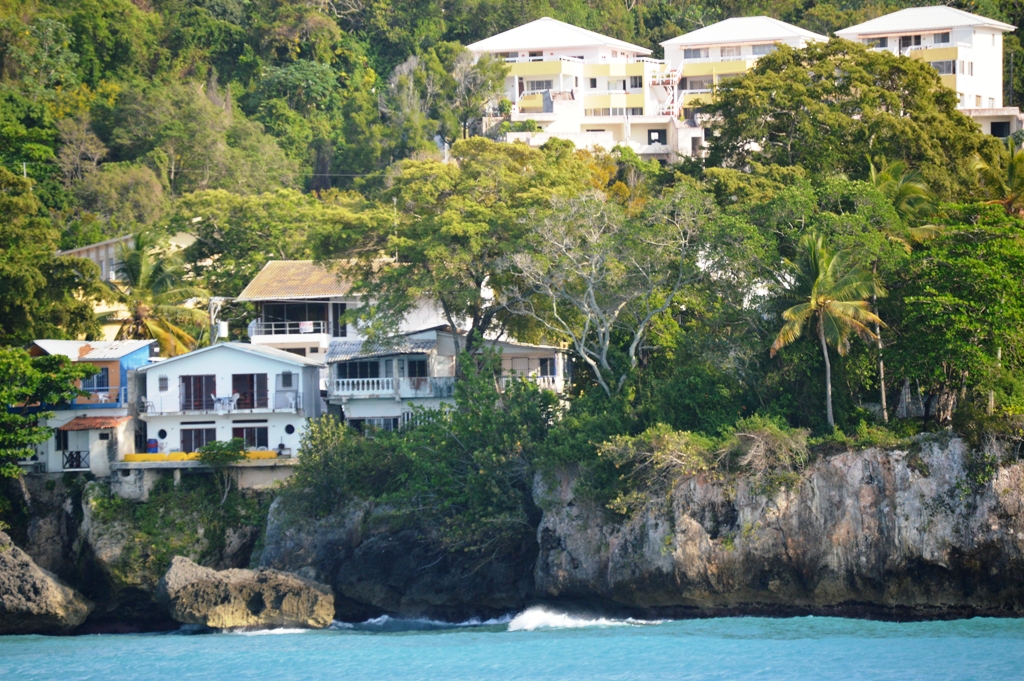 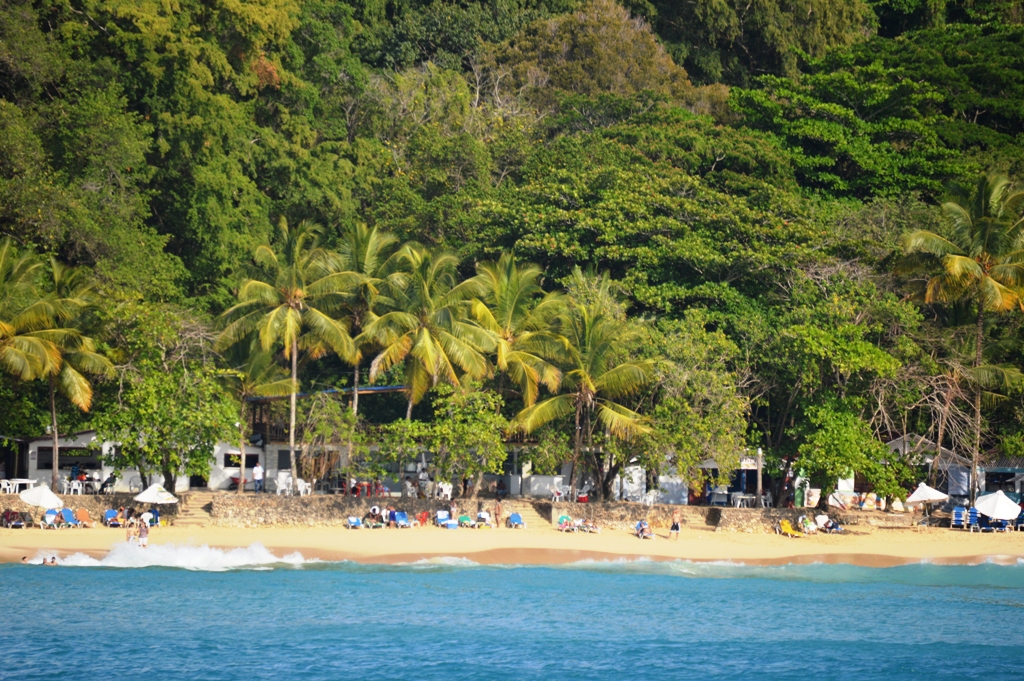 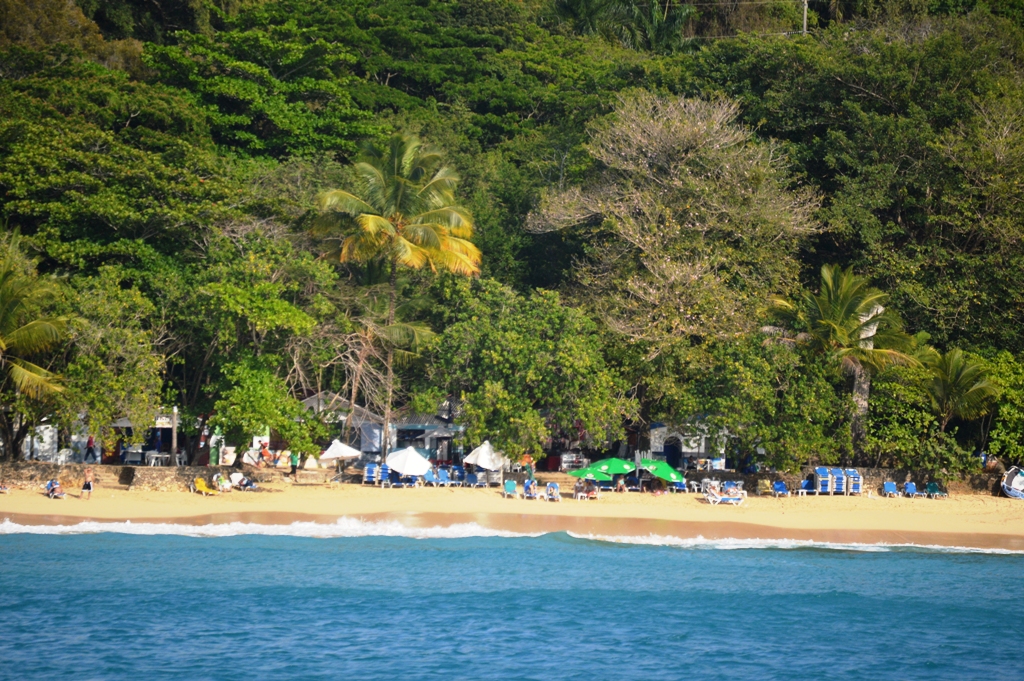 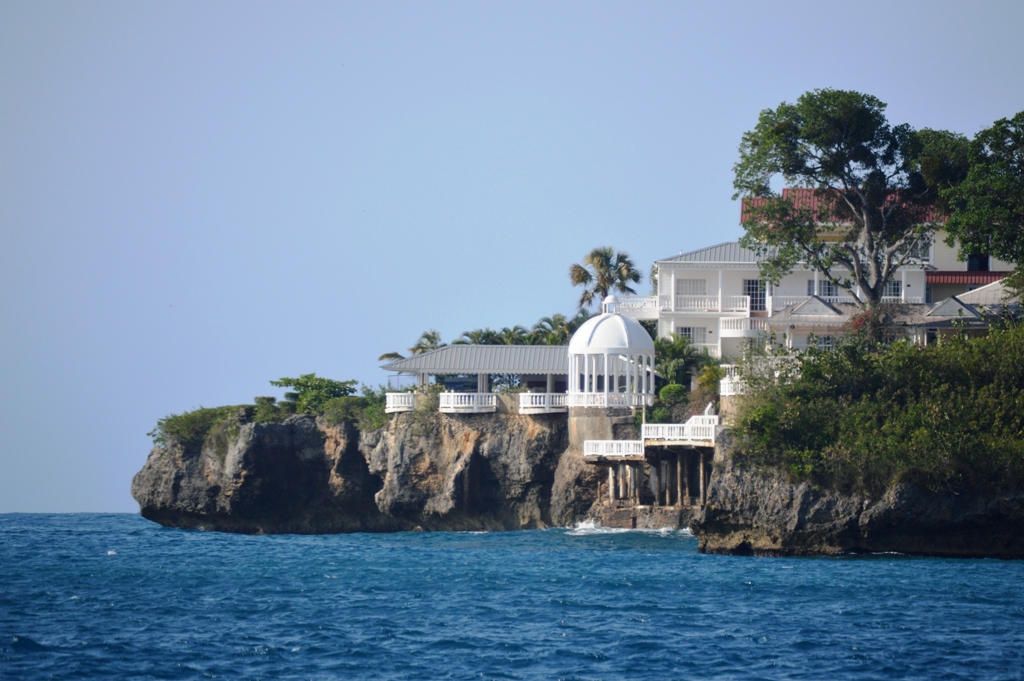 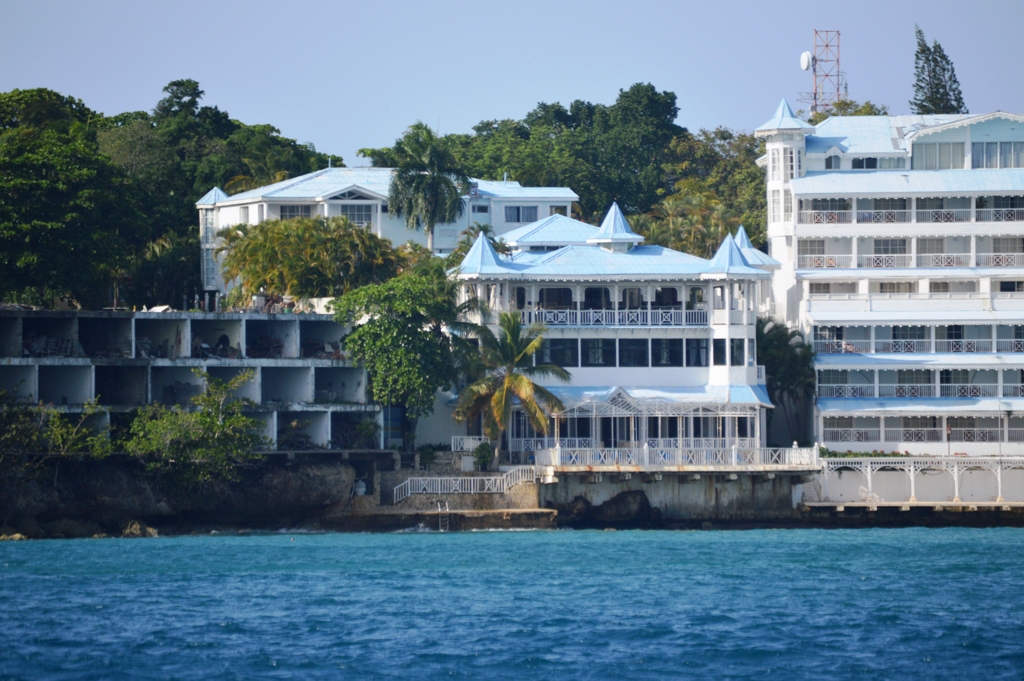 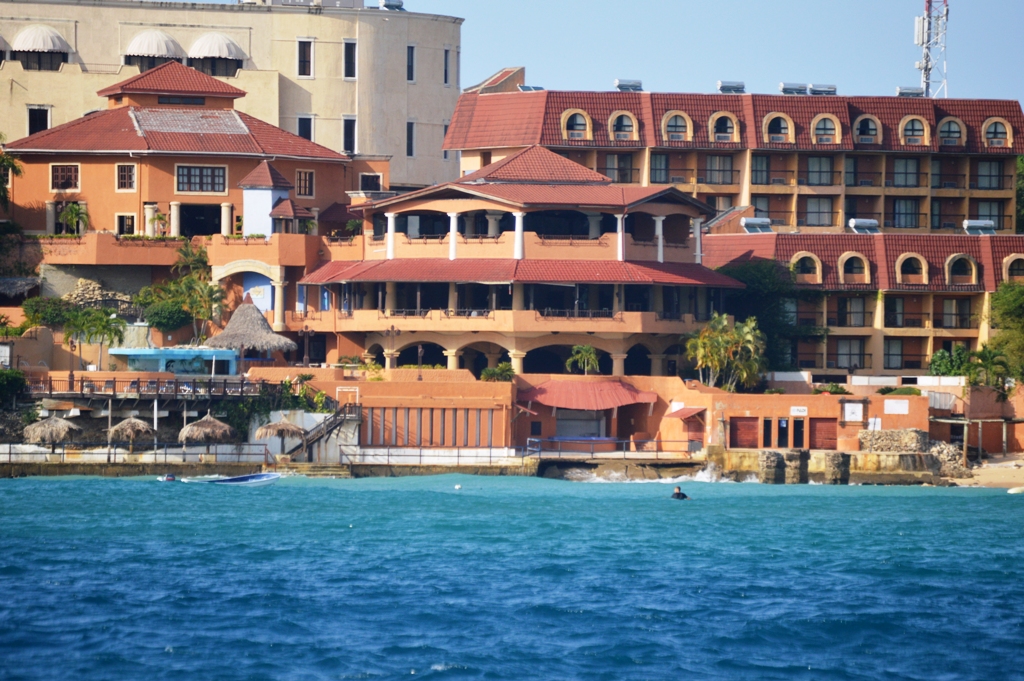 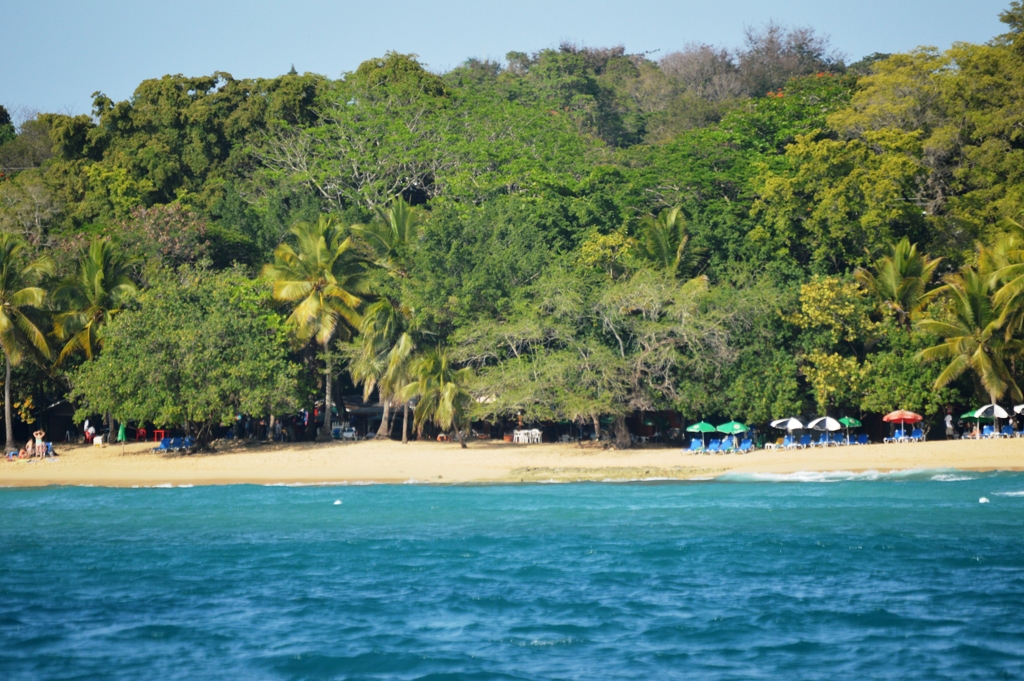 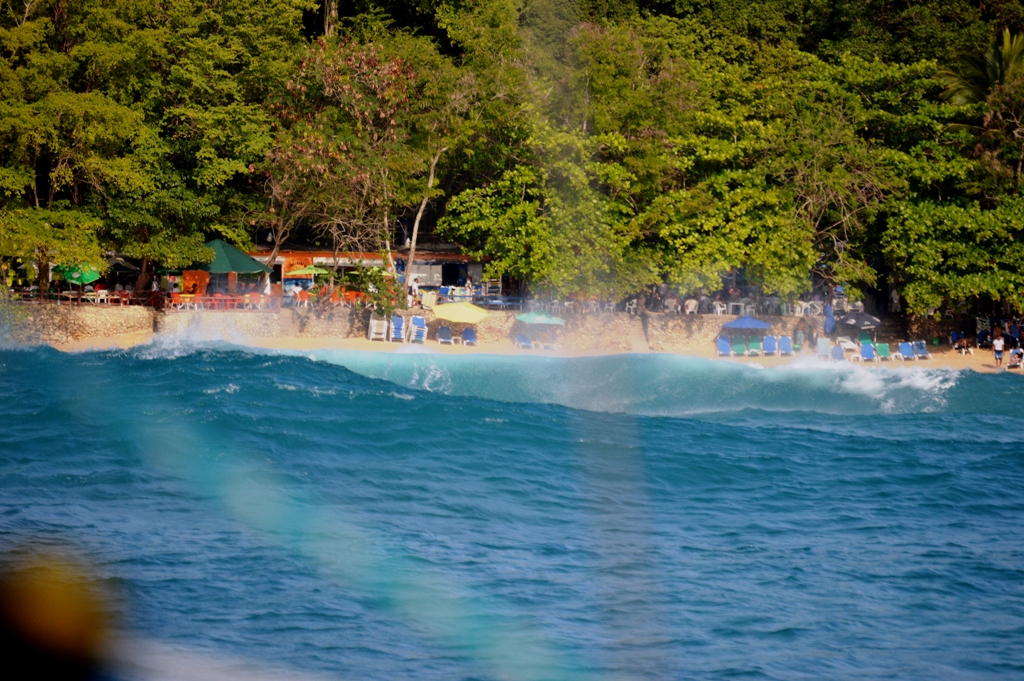 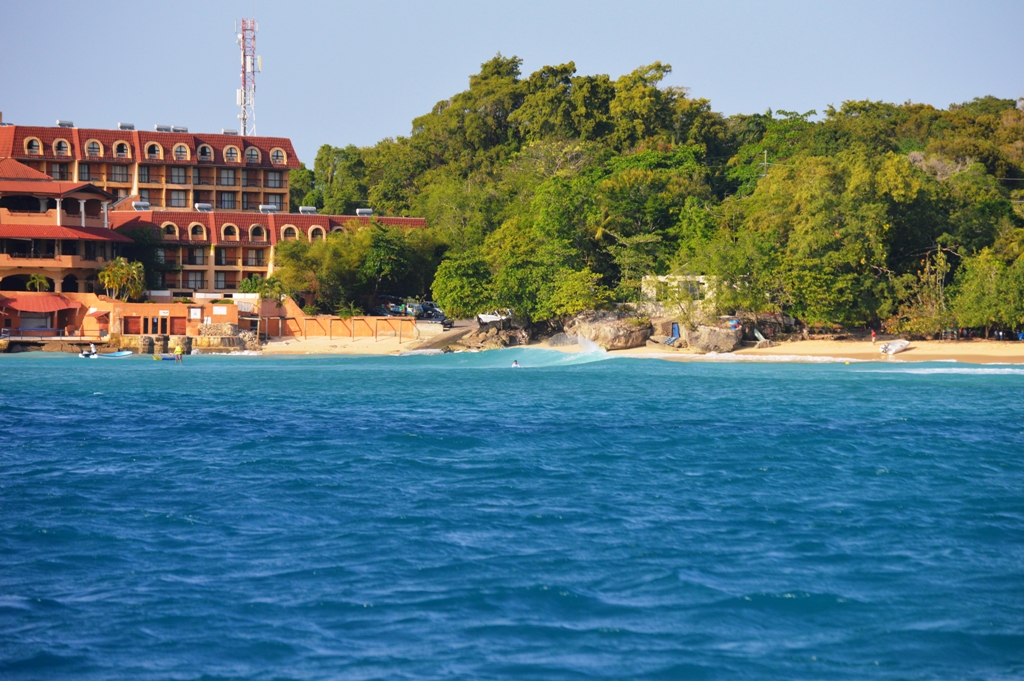 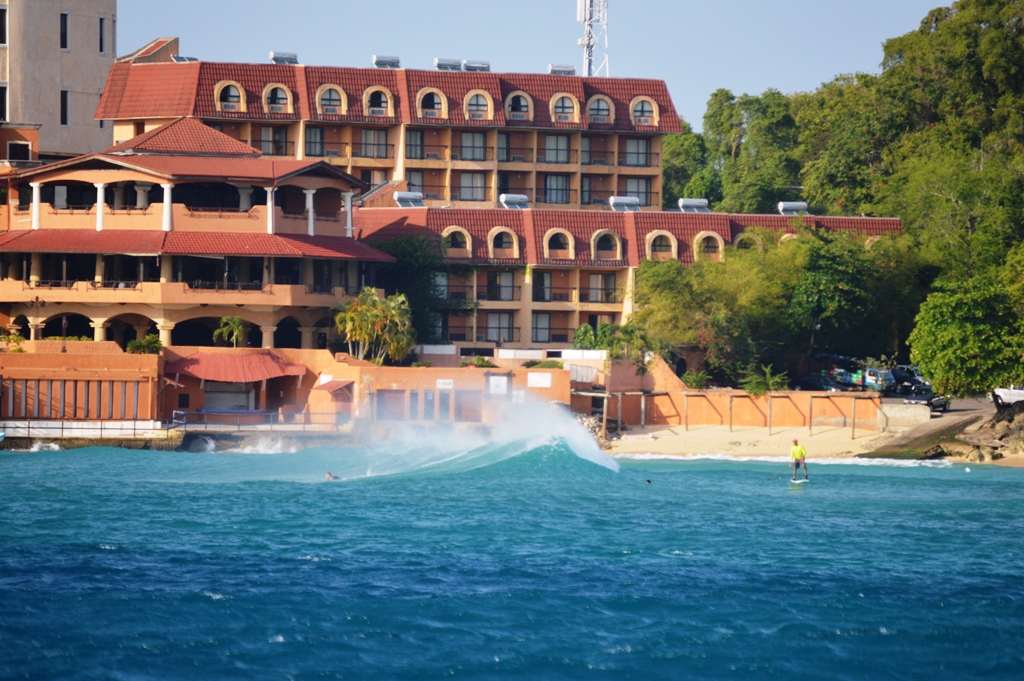 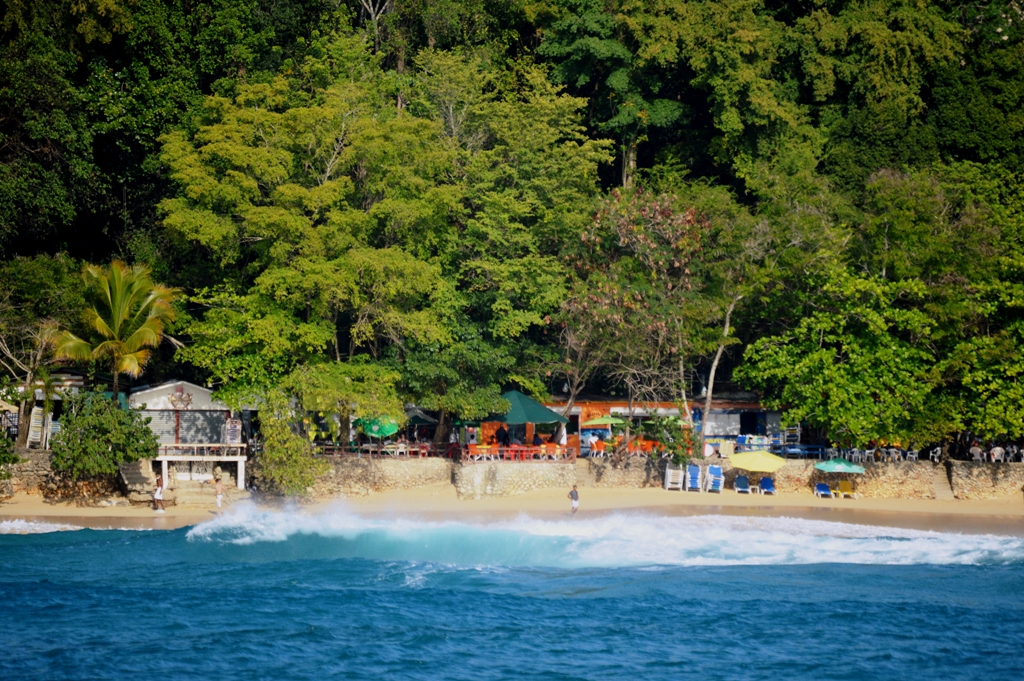 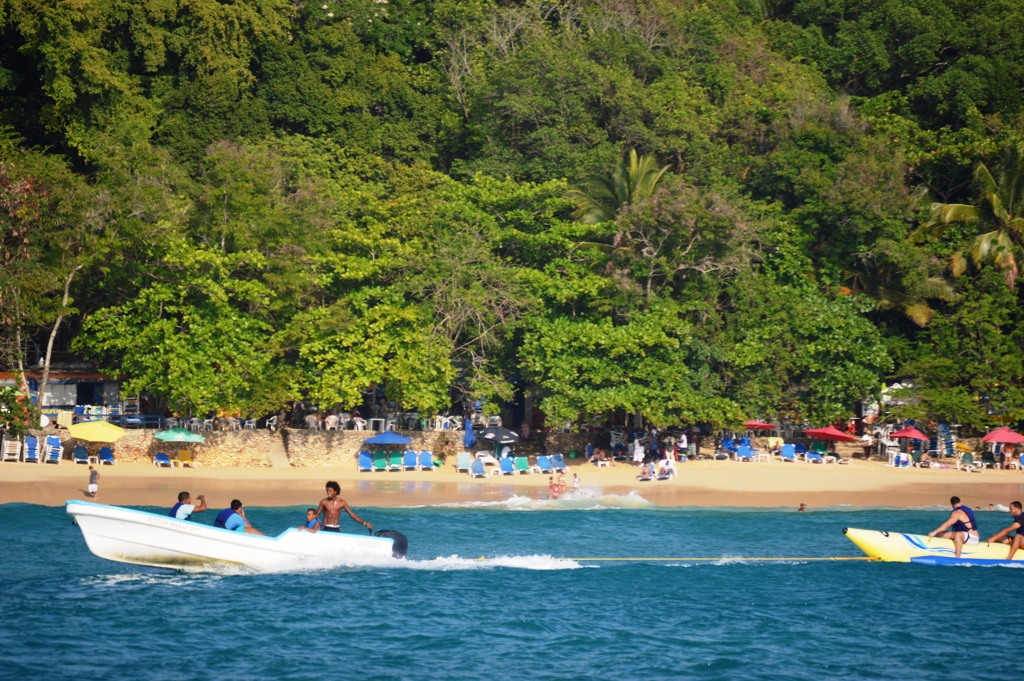 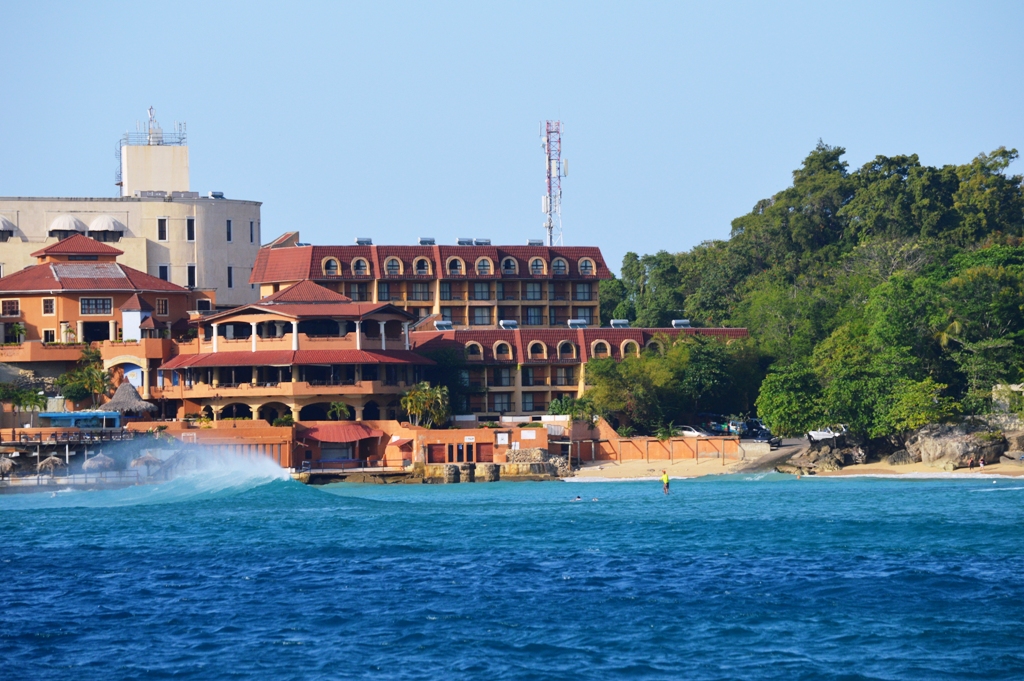 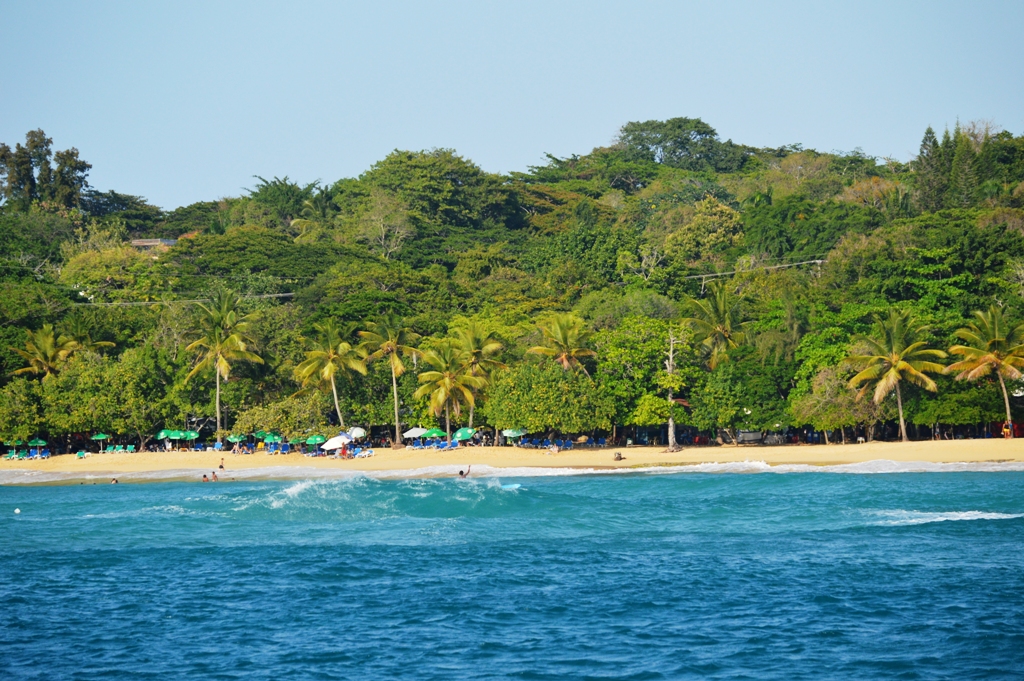 We rounded Cabo Macoris in the middle of the night and made short tacks inside the lee of Cabo Frances Viejo stopping off at Rio San Juan the morning of May 3rd. This part of our journey was pretty uneventful, motorsailing all night and sleeping all day.

The swell wasn’t as bad in the old fishing village of Rio San Juan but we still left our mizzen sail up while were anchored behind several old fishing boats. Having the mizzen sail up keeps us pointed into the wind and significantly reduces the amount of rocking back and forth from the relentless North swell funneling in to the anchorages on the North Coast. 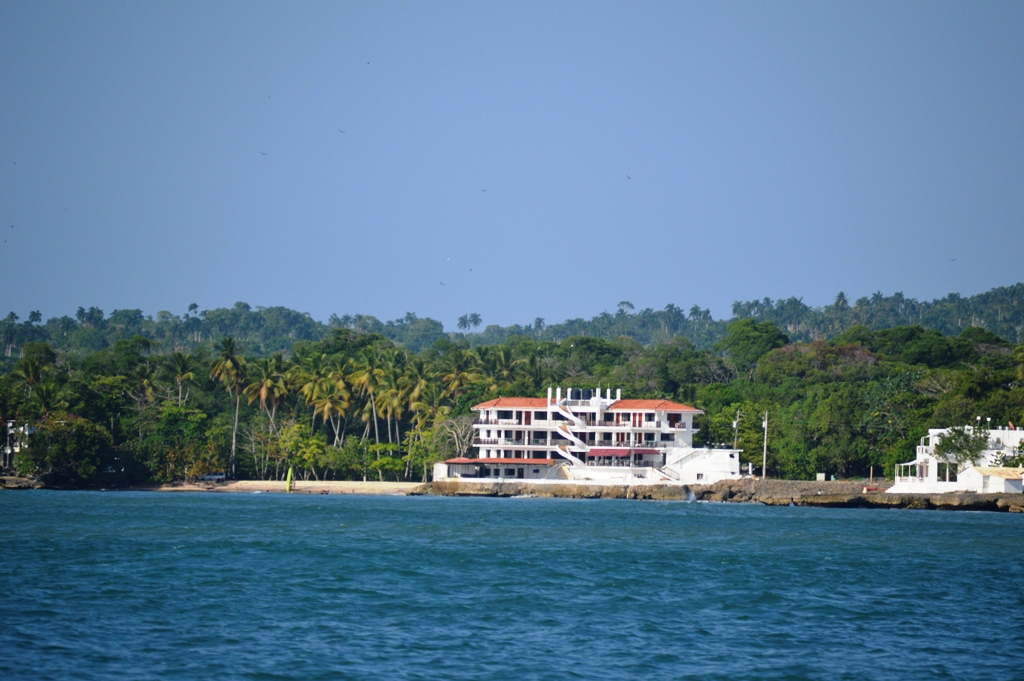 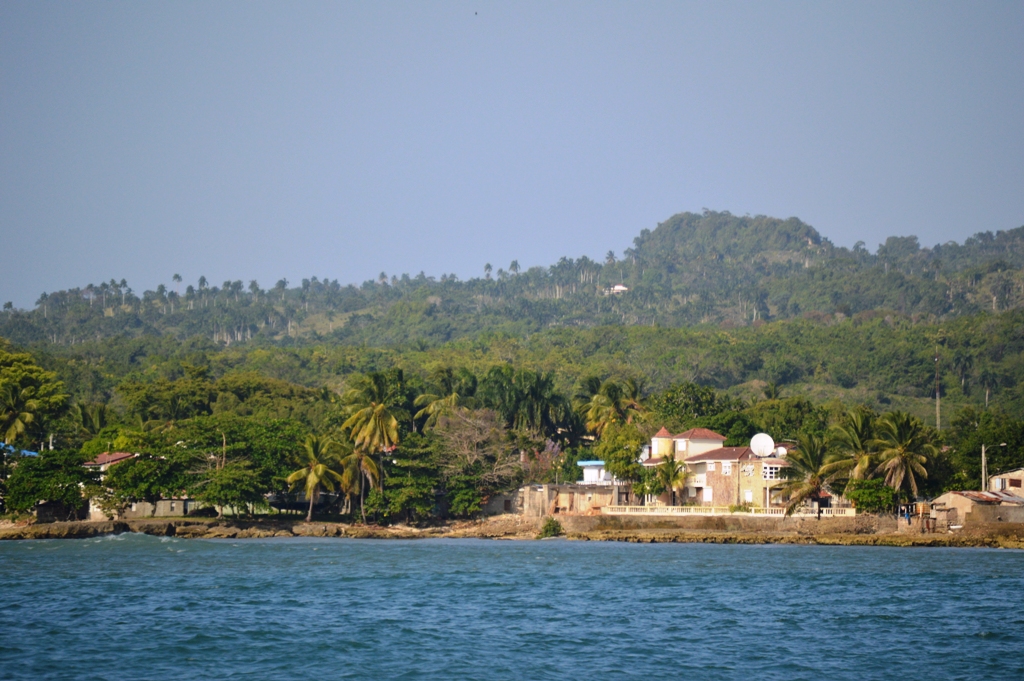 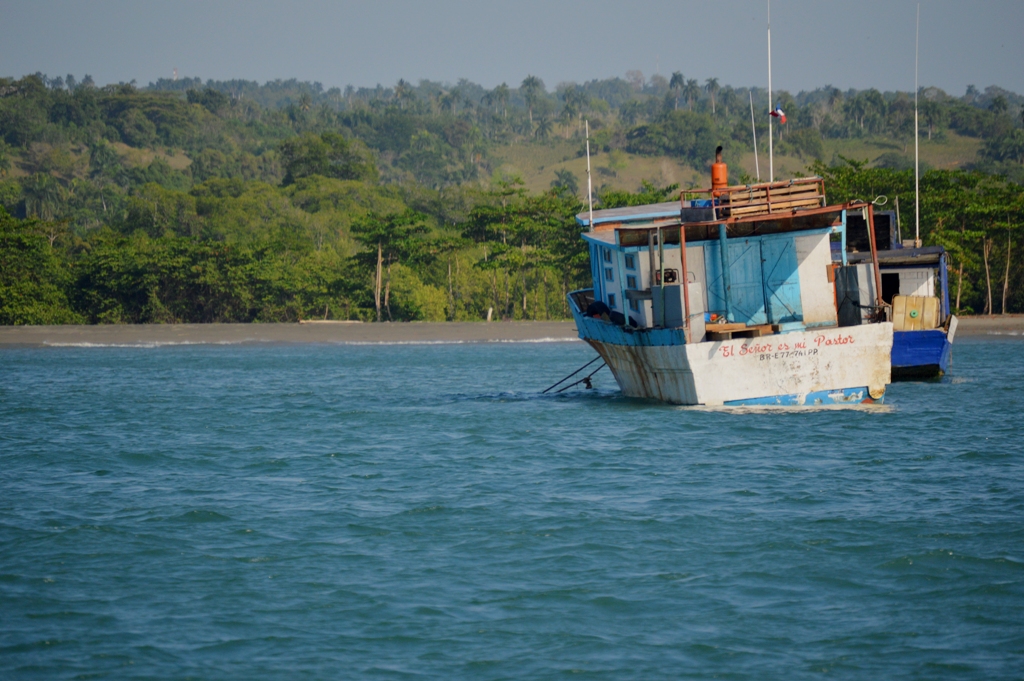 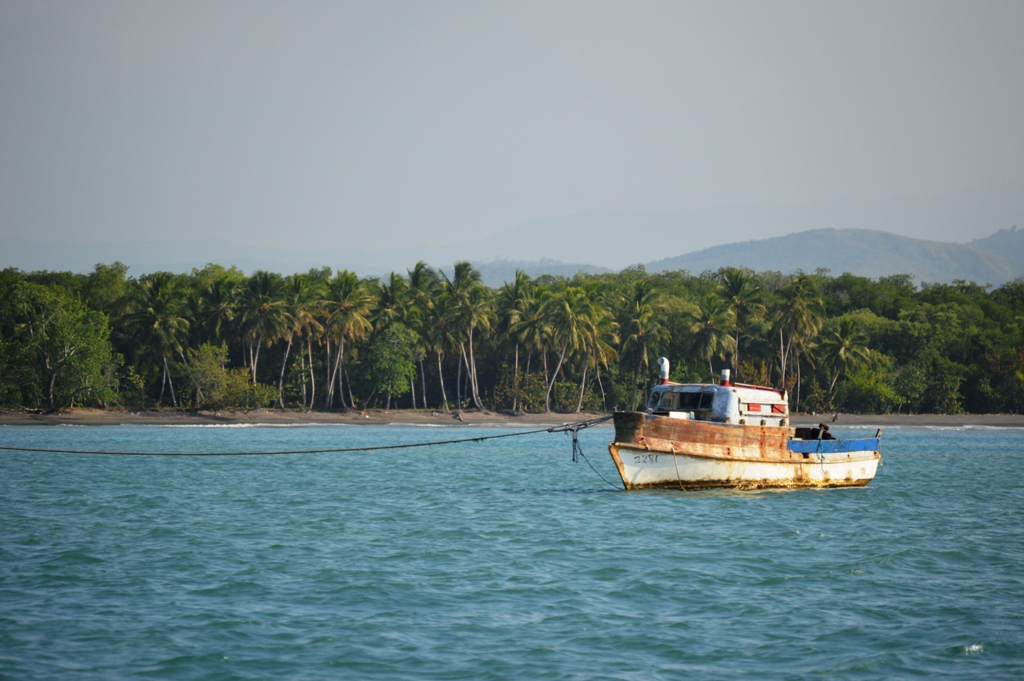 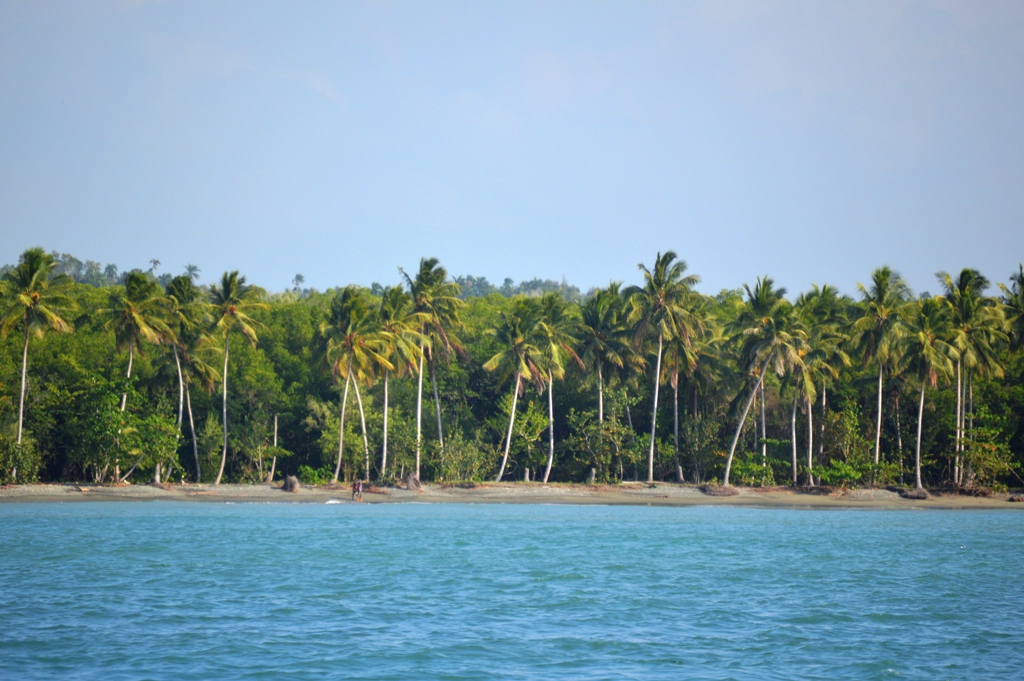 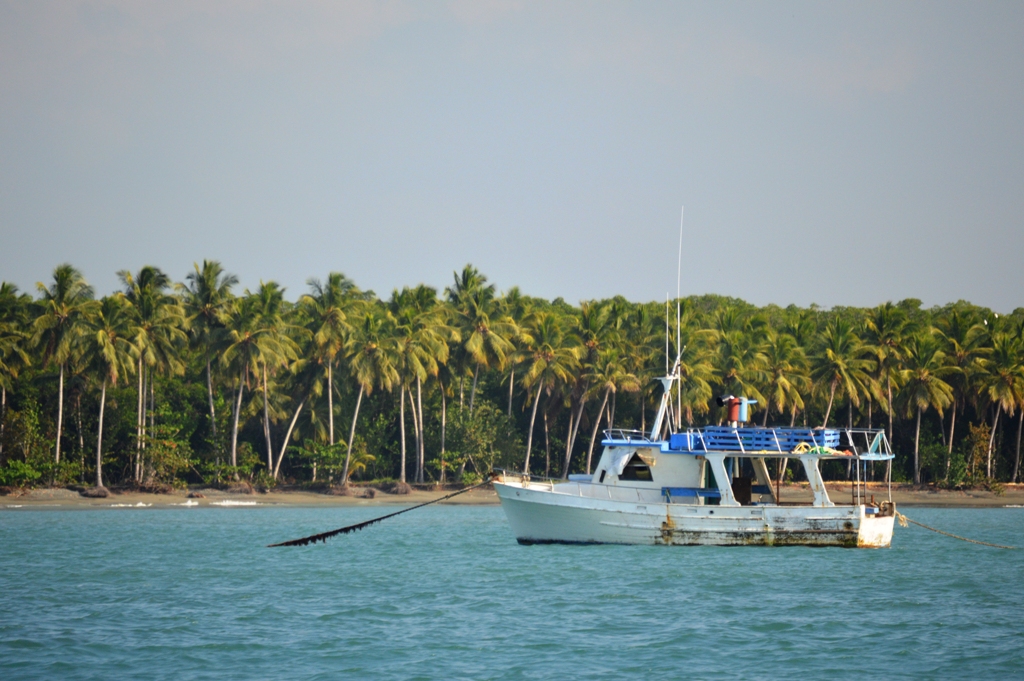 We left Rio San Juan around 9pm that night knowing we would be fighting the Equatorial Current around Cabo Frances Viejo and wanted to clear the cape well before 8am the next morning. We kept with our current schedule of planning the next arrival for 8 or 9 am before the winds picked up.

The shores of Bahia Escocesa led us to what Van Sant calls Puerto Escondido, tucked inside a gorgeous hillside of mountains and cliffs. This would be our last stop before crossing The Mona Passage the following day.