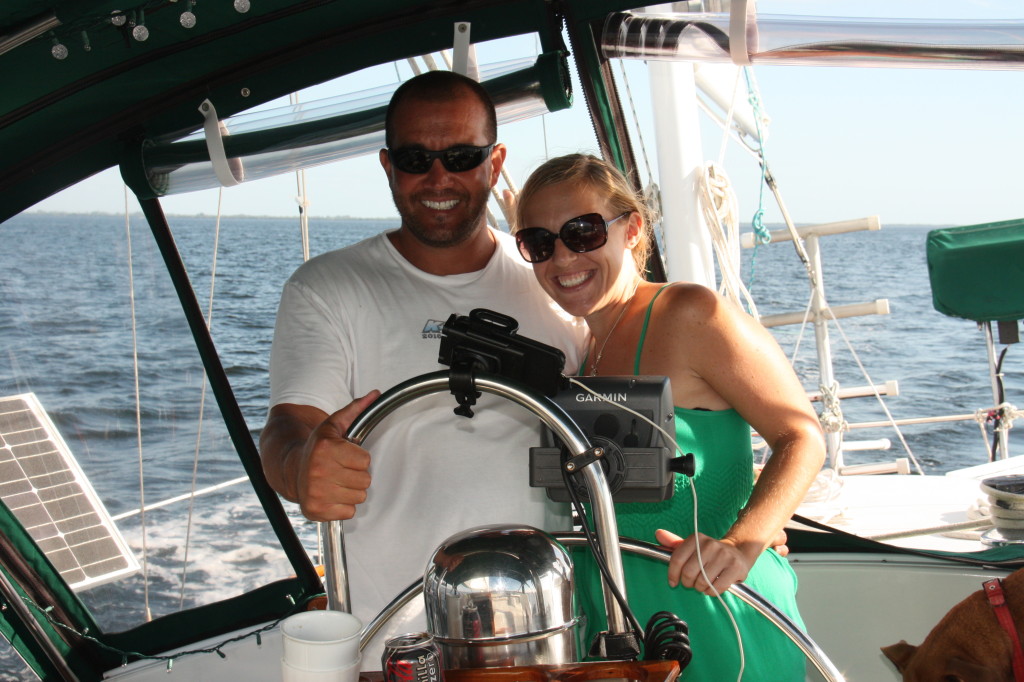 By definition, a maiden voyage is the first journey made after the shakedown. We definitely plan to do a few serious shakedown cruises before leaving Florida to make sure all systems are GO but Peter and I like to consider the sea trial we did in July to be our first shakedown. So, we would excitedly like to announce that our MAIDEN VOYAGE was on Sunday 11.17.2013 aboard S/V Mary Christine!! 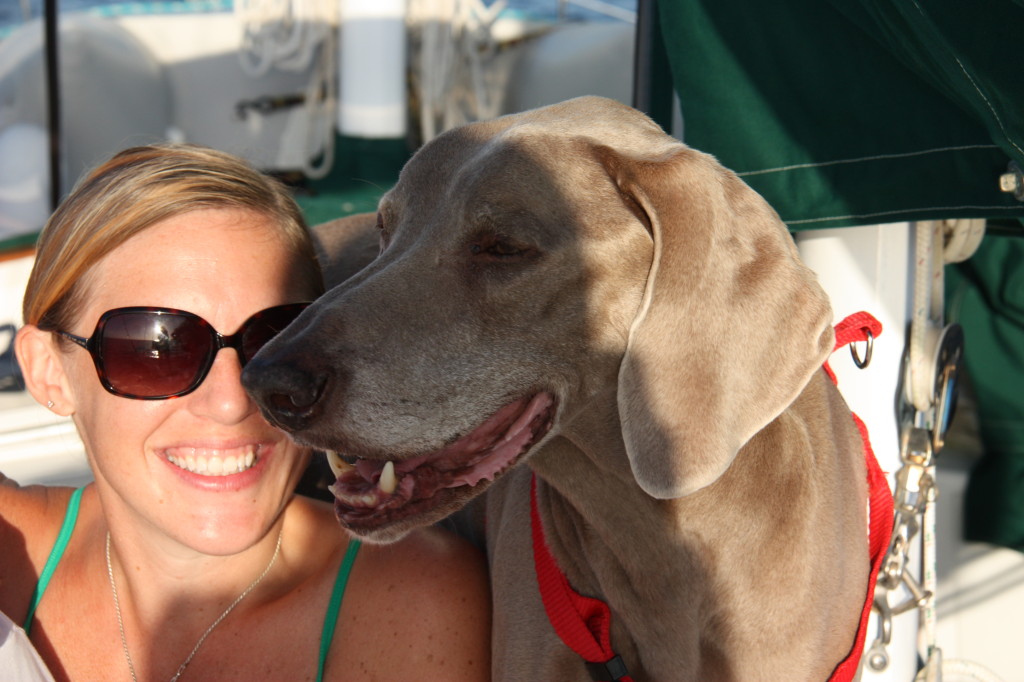 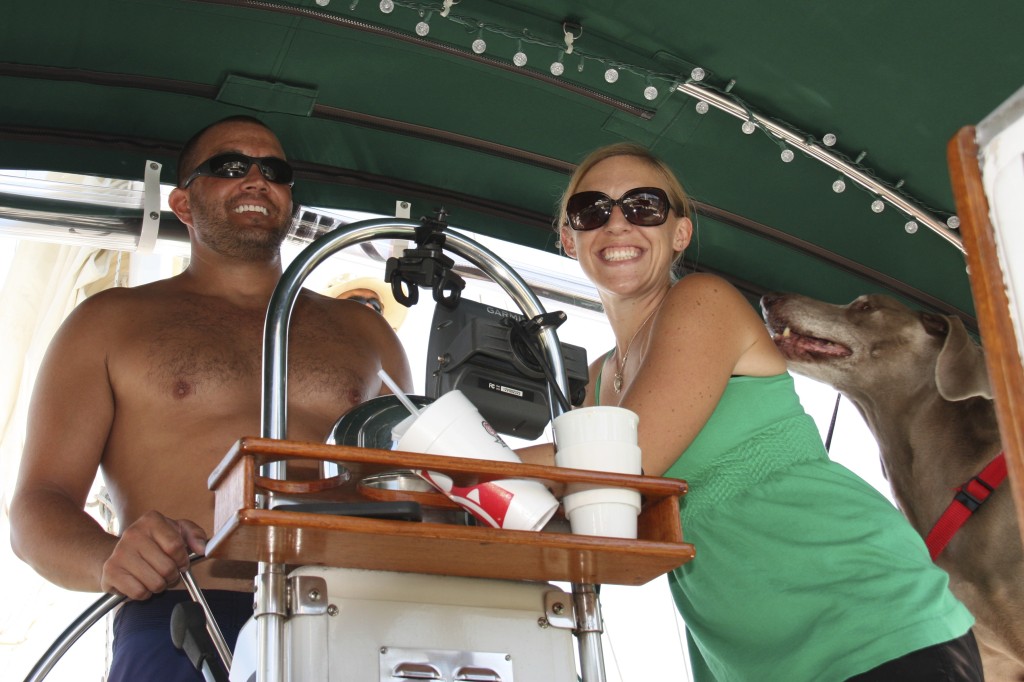 We were so lucky to have our friends David and Jan from S/V Winterlude (commutercruiser.com) come out with us and “show us the ropes”, err should I say lines, for our first official cruise in Charlotte Harbor, FL. Thanks to Jan we got some great photos of our first family outing on our boat! The weather was perfect. It was sunny but not too hot. We waited until the afternoon when the winds died down to about 10 knots, then threw off the bow lines while Peter took the helm and guided us out of the slip. It seemed like only a two-point turn and we were on our way out! Easy. The engine purred and we motored out through the quiet marina towards the opening to the harbor. We got past the markers, pointed into the wind, set the autopilot and hoisted up the sails. The conditions were just right for us to get all three sails up without any trouble. We cut the engine and that was it… we were sailing!!!! It’s the most amazing feeling, we were free as the wind. Everything was so peaceful. We knew in our hearts that Christine was with us dancing up on the bow smiling back at us. All was perfect in our world :) 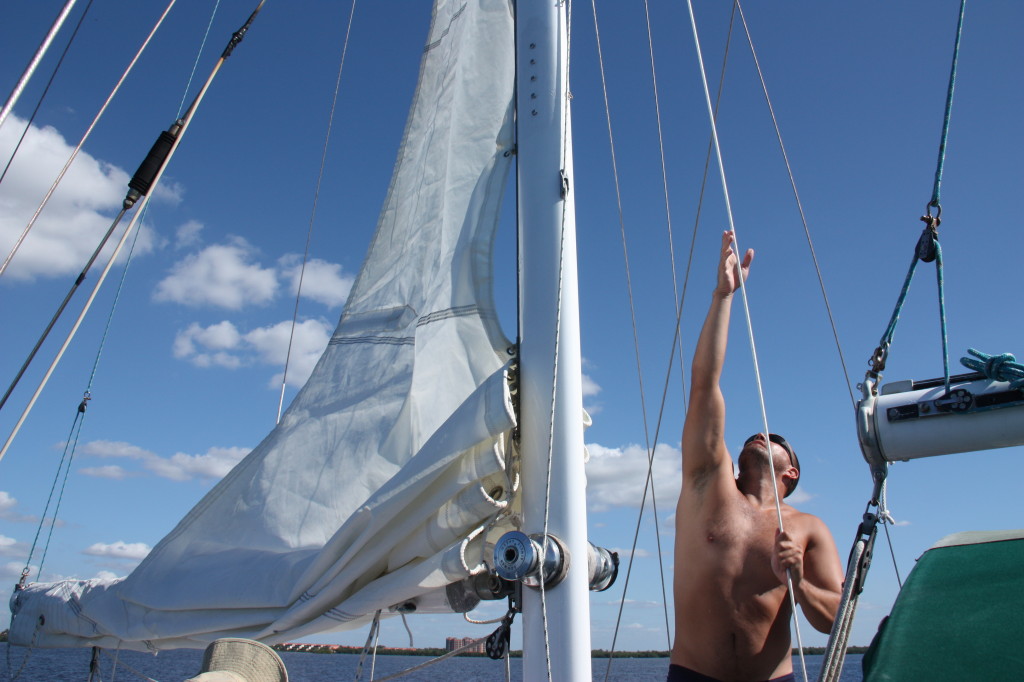 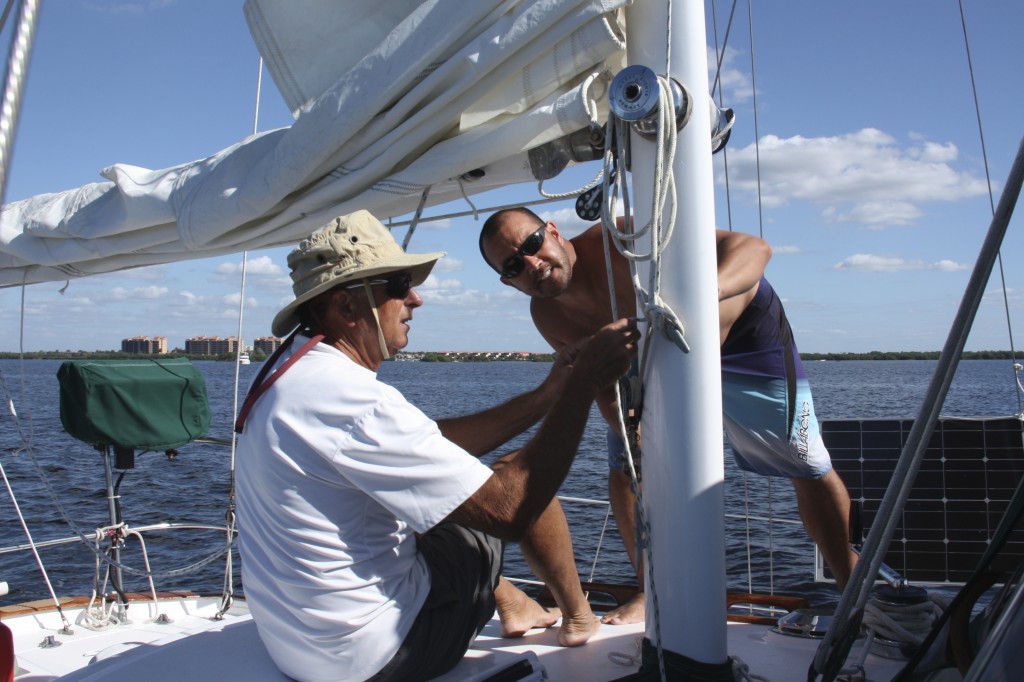 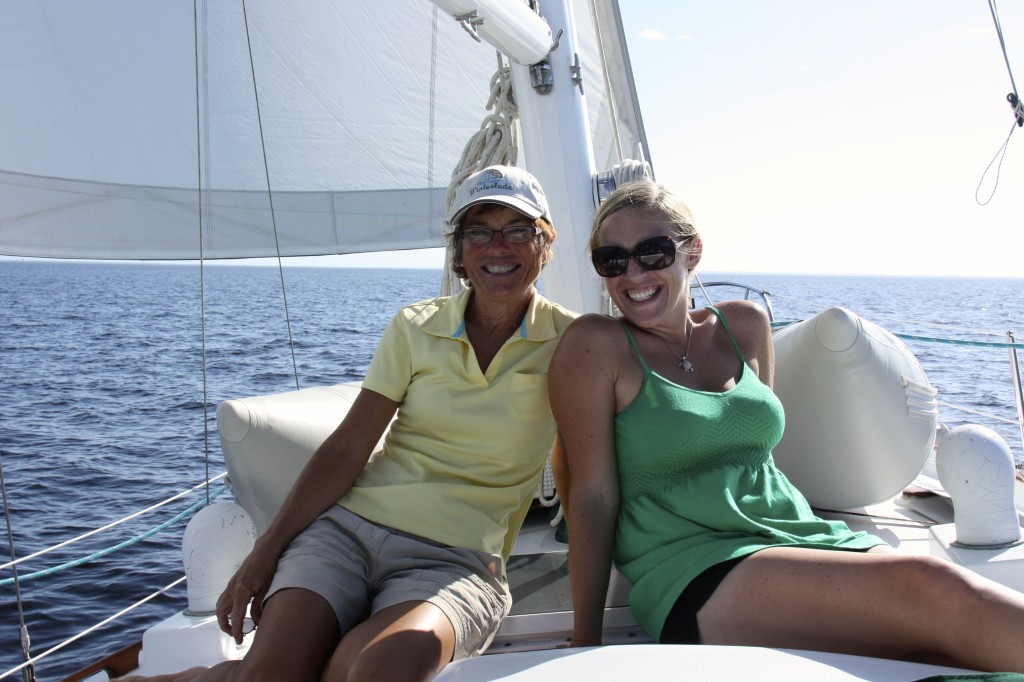 Betsy thought it was the coolest thing ever that our house was moving! We knew she would do great but this day just confirmed that she’s a natural boat dog, cruising around the decks like the little monkey that she is. Betsy was more than comfortable as we were underway and had no problem exploring on her own as we sailed along. She has excellent balance and we didn’t worry about her at all. The whole afternoon she made sure to stay alert where all the action was while scanning the water for birds and dolphins. Gunner did surprisingly well for his first time out on the water too! He was very curious about what was going on, but loved to be outside in the sunshine and he’s always happy as long as he’s with us. We tethered him up to the binacle in the center of the cockpit so he wouldn’t decide to go exploring like Betsy. His balance isn’t great in his old age and we don’t have the lifeline netting up yet so it would be easy for him to accidentally tumble overboard with the rocking from a wave if he were on deck. Once we turned off the engine he curled up in his bed and was rocked to sleep for his afternoon nap in the sunshine. 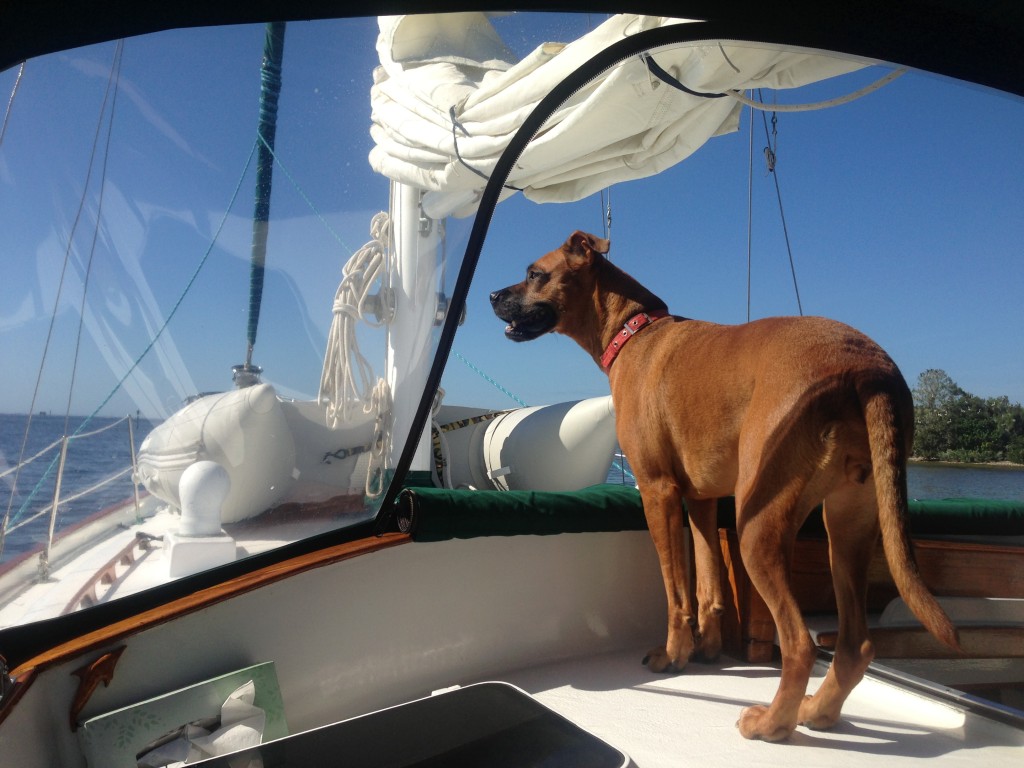 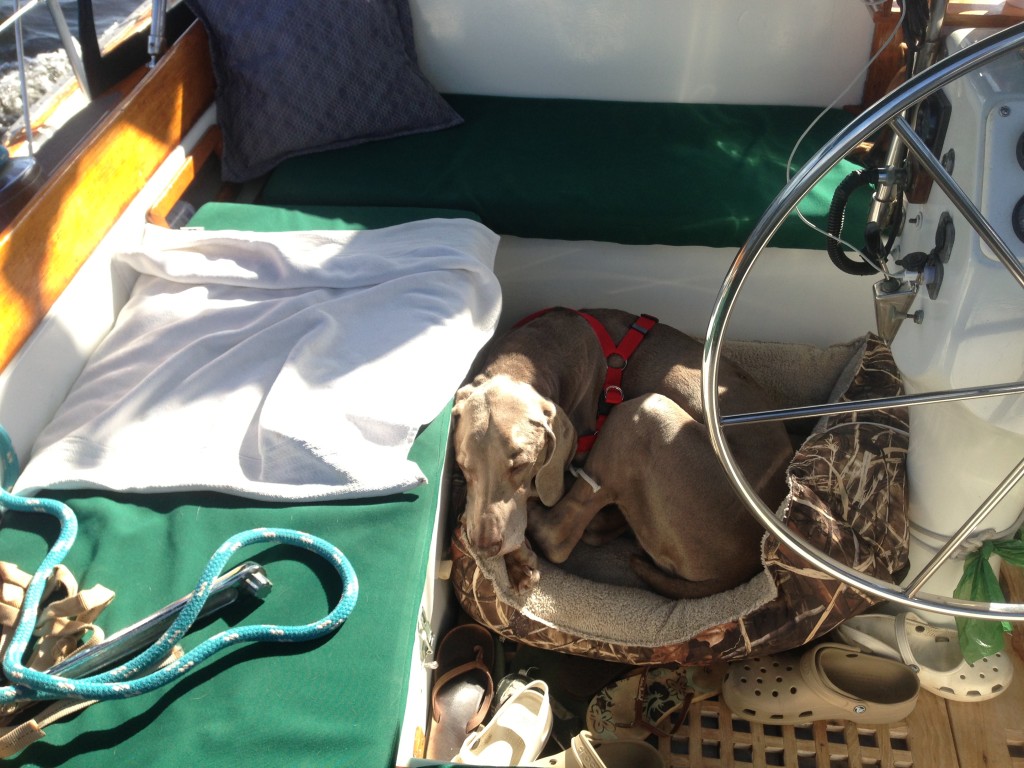 A few hours went by in the blink of an eye and it was time to head back while we still had some daylight. We neared the entrance to Burnt Store Marina and brought the sails down. Peter motored us back to the slip and did a fantastic job docking bow-in. We decided however that there was just no practical way to get the dogs on and off the dock in that position so we had to reverse out, spin around and re-dock stern-in. It took a few tries but we had a lot of neighbors standing by to grab a line and eventually we got it, damage free! We did learn which way this boat tends to walk in reverse, which is to the right. Now we know for next time, and hopefully it will be a little easier when trying to back in a 42′ drifing tank into a tiny little slip. 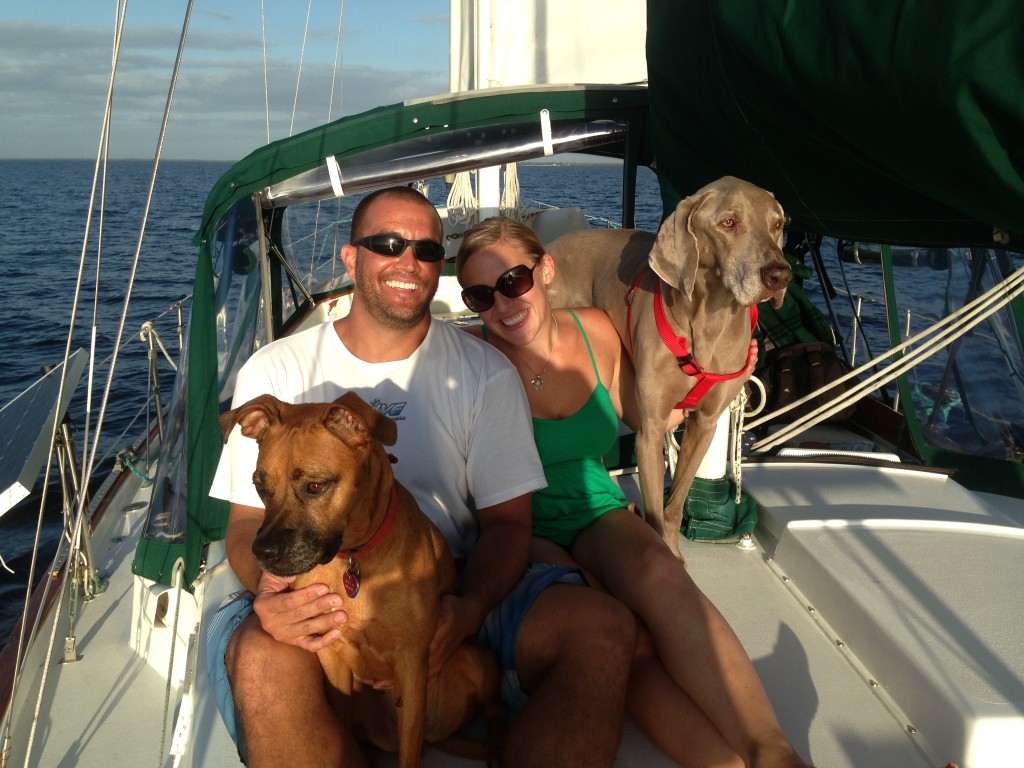 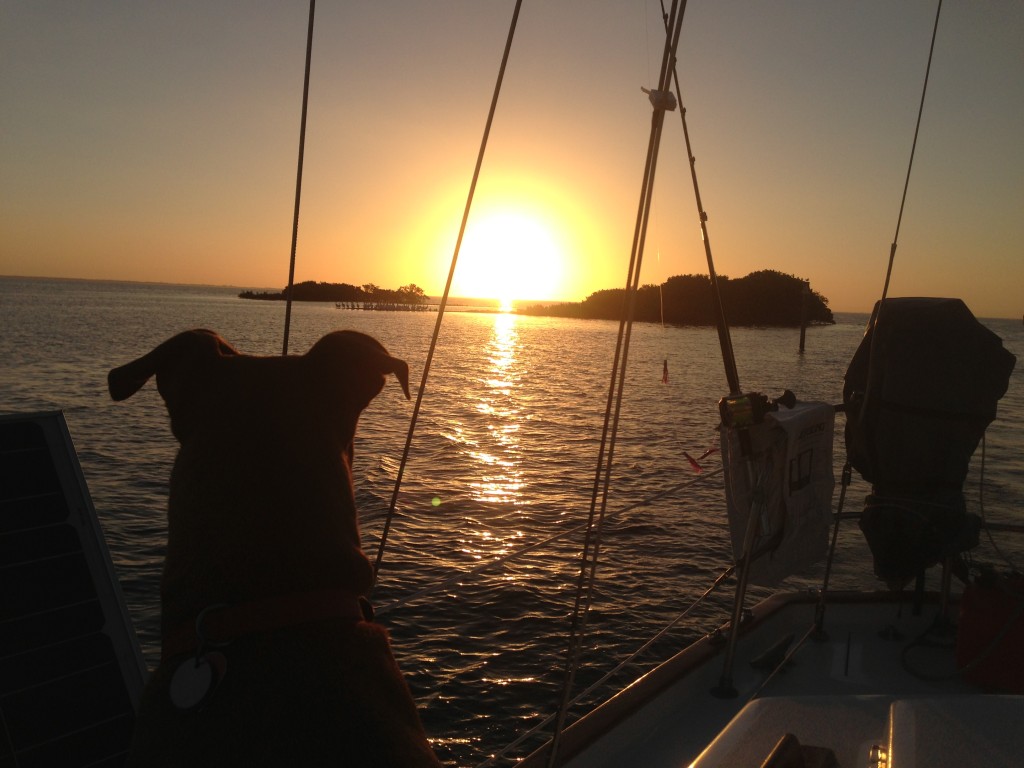 After we were all secured back at the dock, the puppies were anxious to get back on land to go potty and then hurry back onboard for their dinner. While the dogs ate, we grilled up some steaks, corn, potatoes and garlic bread and enjoyed a wonderful meal in the cockpit with Jan and David. What a wonderful way to spend a Sunday afternoon!!