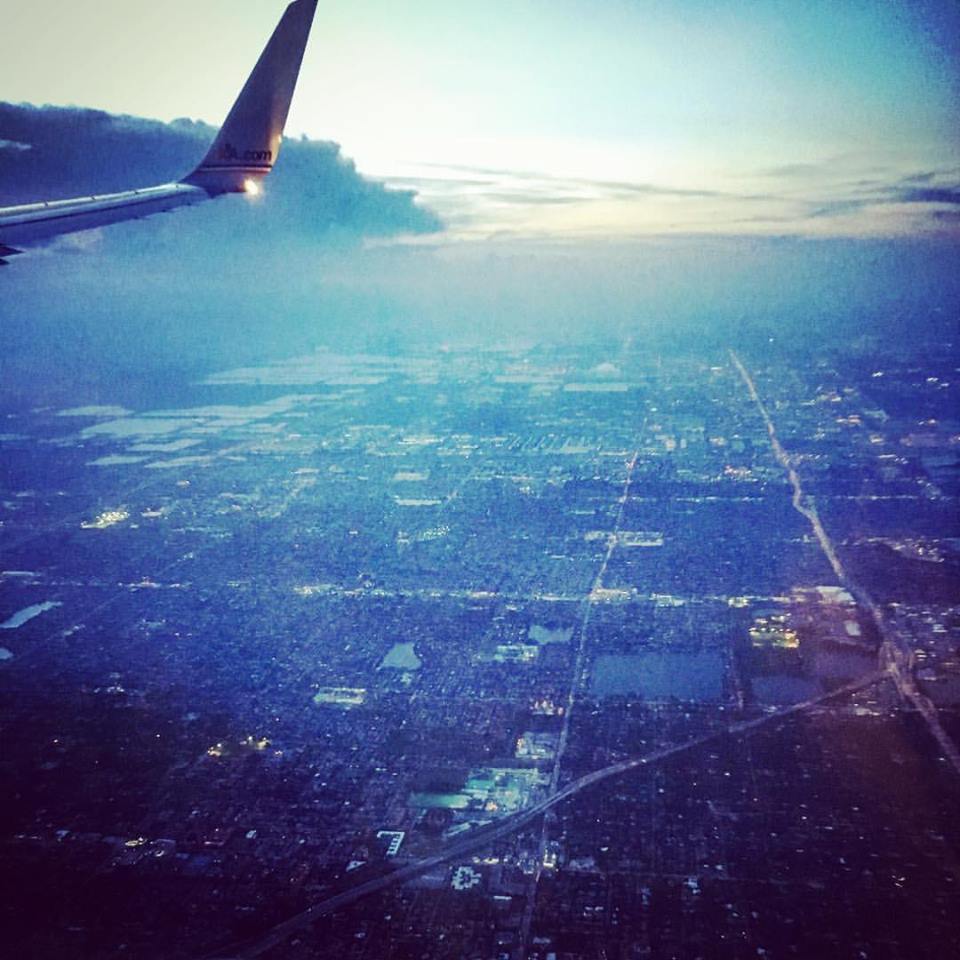 After a short layover in Miami, we arrived at LAX airport in the very wee hours of August 6th. Peter’s dad was waiting for us at the baggage claim area with arms wide open. He’d visited us in the islands a few times but it felt like forever ago. Until this moment, we were California Dreamin’ about what it would be like to be back in the states. After years of living in the islands, it becomes quite clear that the U.S. is the land of milk and honey – the land of plenty – where everything you could possibly want is at your fingertips.

What did we do first? We went to the closest In-n-Out burger drive-through of course!! We fed our starving faces after a very long day of traveling and then proceeded to take a nice long, real, hot shower back at Peter’s dad’s house, before completely crashing out.

The very next day we made it a priority to find some real authentic Mexican food! Three years without it is just wrong. 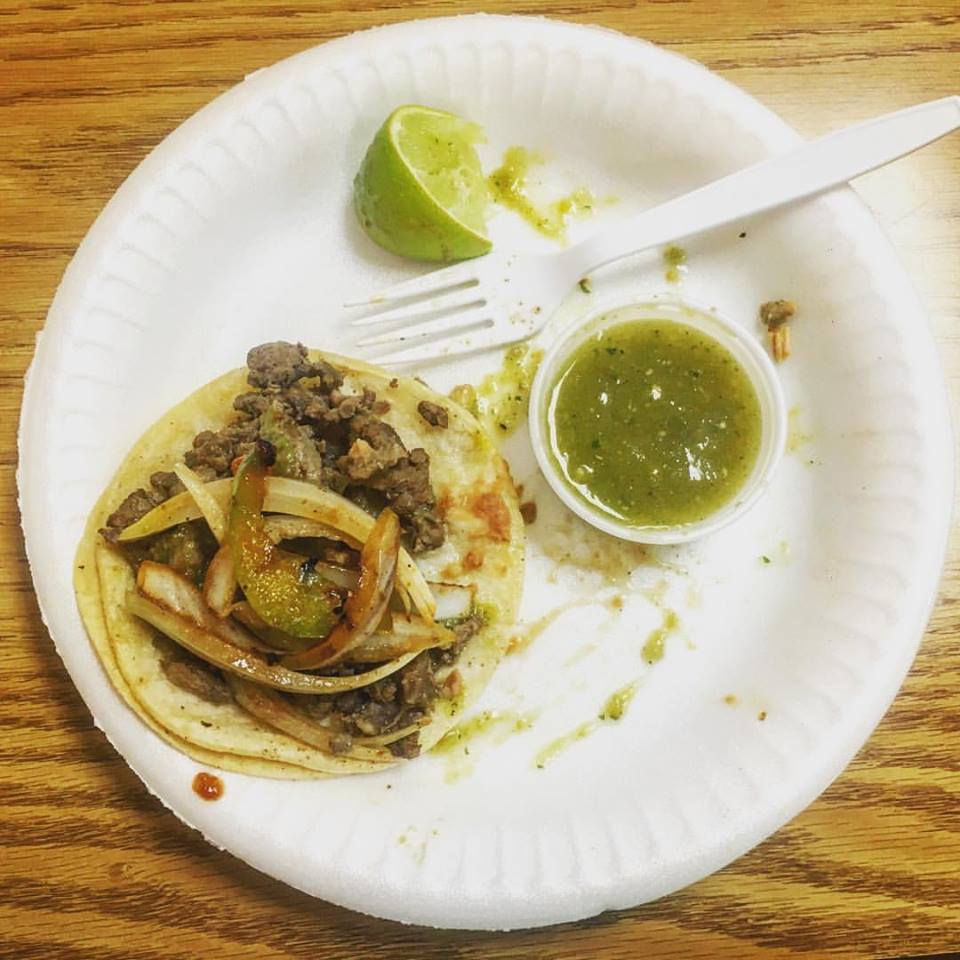 Over the next few weeks we accumulated some new clothes and some running shoes. We went into a Costco probably a little sooner than we should have – I think I almost had a panic attack from sensory overload in there. The carts were four times bigger than the ones in Soper’s Hole and it was like a frickin freeway in every isle! We went into a normal sized grocery store, a CVS pharmacy and even the movie theaters. It was exhausting. 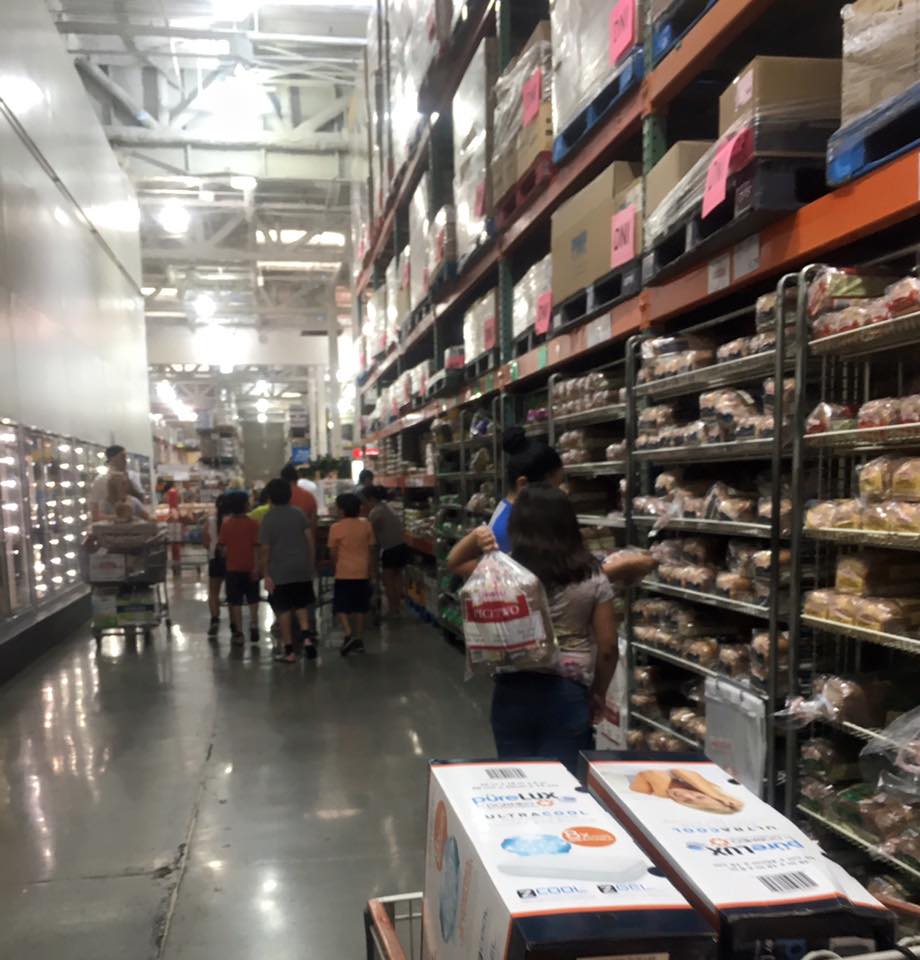 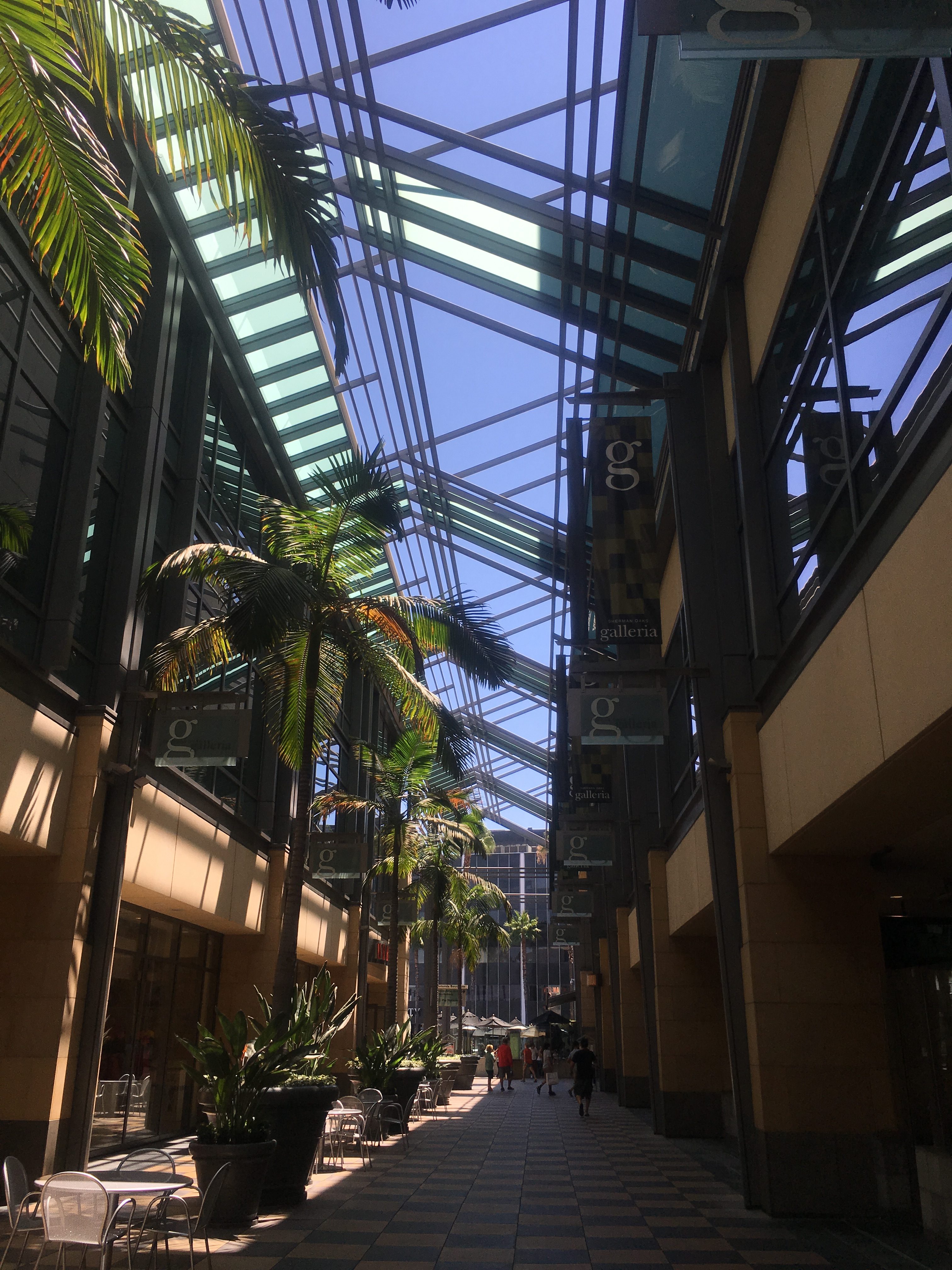 I stared in awe at things like water fountains in the mall where they just keep dumping water out all day long and people even throw money into it!!! Mind blowing!!! Its things like this that I never would have noticed before. Now, it’s incredibly disturbing how wasteful our society is. I thought California was in a draught. (I know its probably recirculating water but still… ) 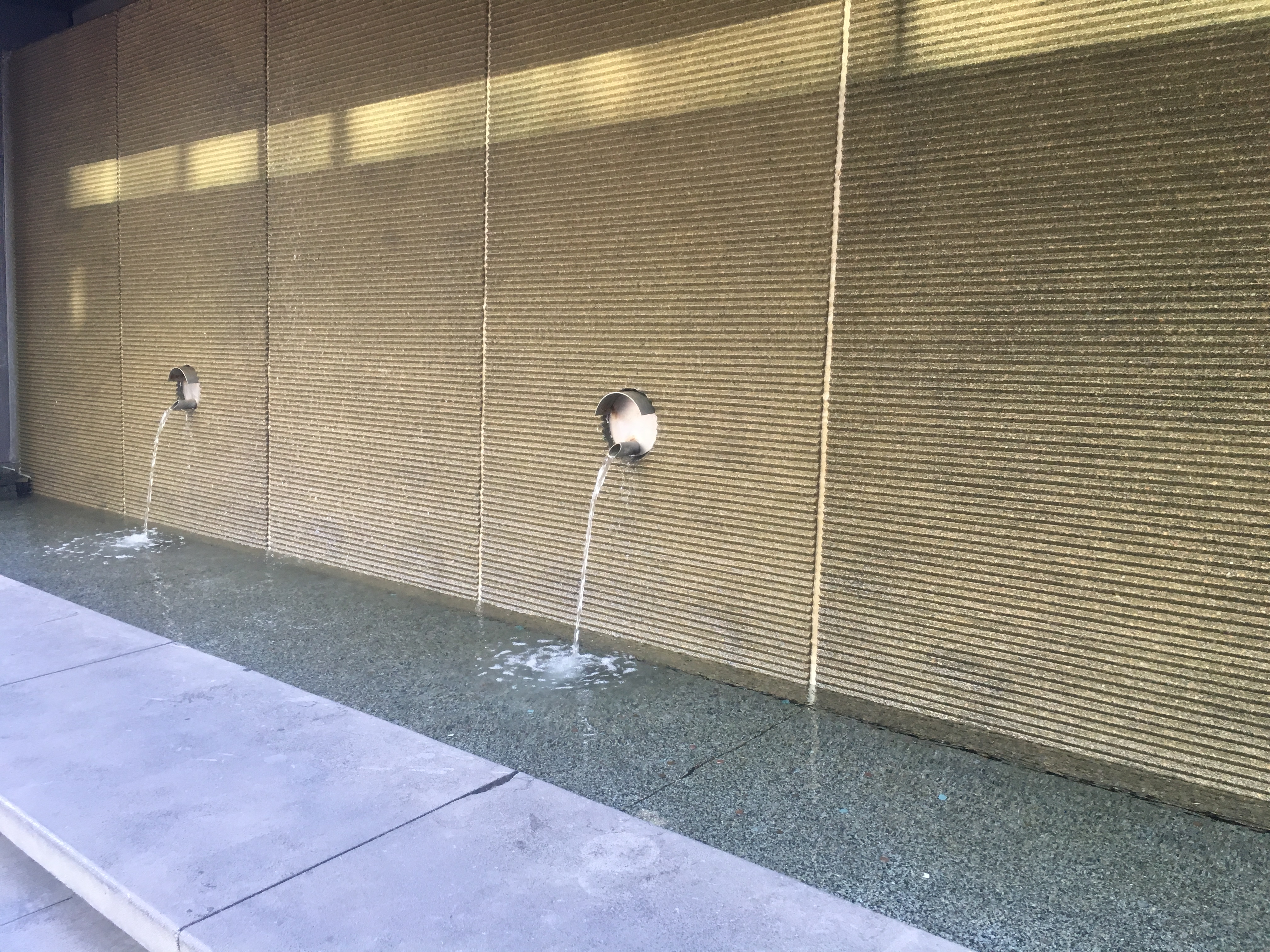 We also took care of some real-world responsibilities like renewing our driver’s licenses, buying and registering a new-to-us car, obtaining car insurance, and sorting through mail. We even stood in line outside the DMV before it opened. What a nightmare. 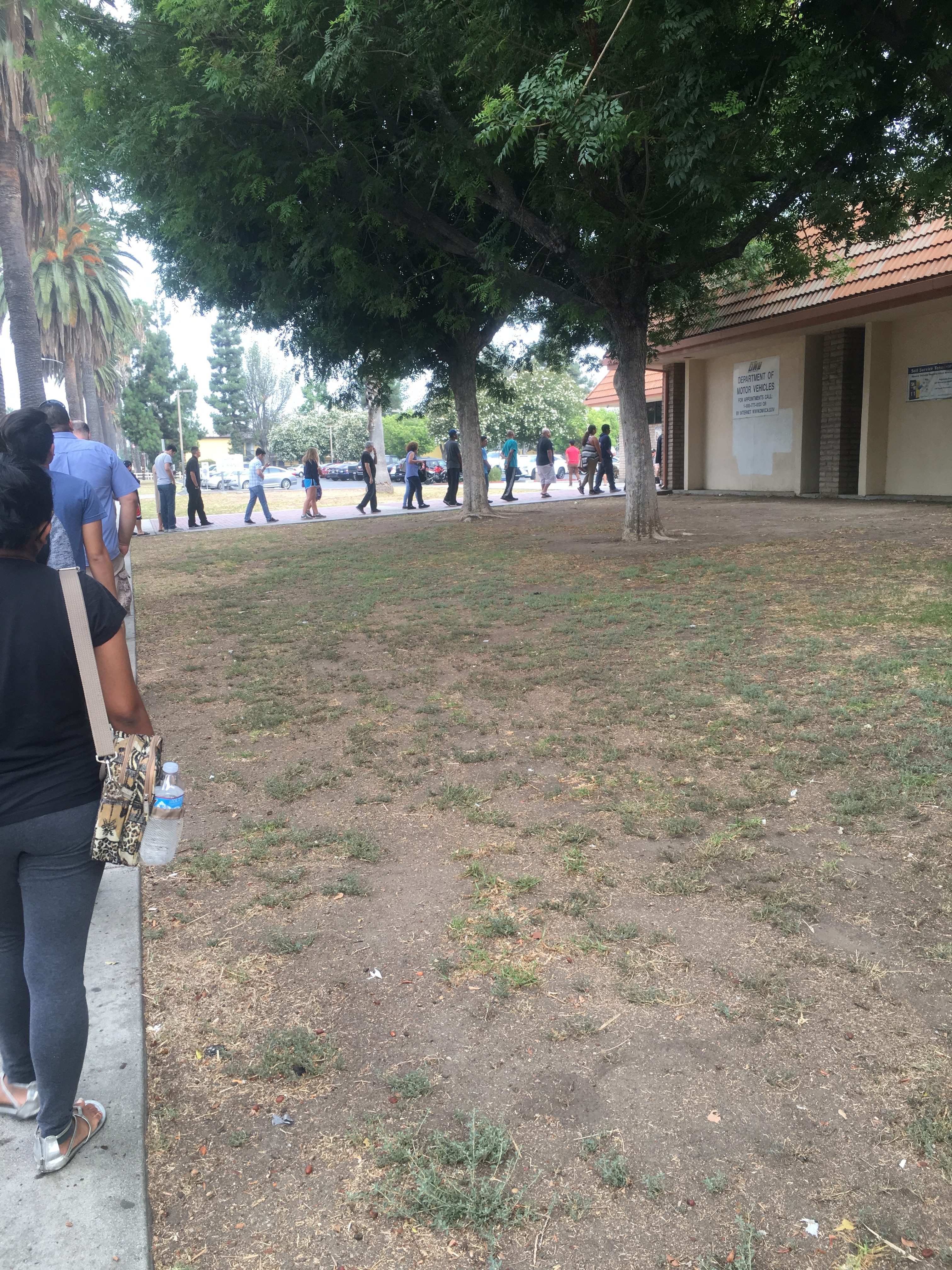 We found a great deal on a 2006 Tahoe on Craigslist that would serve many purposes for us, most importantly getting us around to all the family we were going to visit. We wanted something comfortable, reliable, something we could potentially sleep in while driving from California to Washington, something with 4wd and something that would easily tow the motorcycle trailer we had left our stuff in three years before. We had plans to tow the trailer up to WA then empty it at my dad’s, then sell the truck and trailer before flying back to our boat. 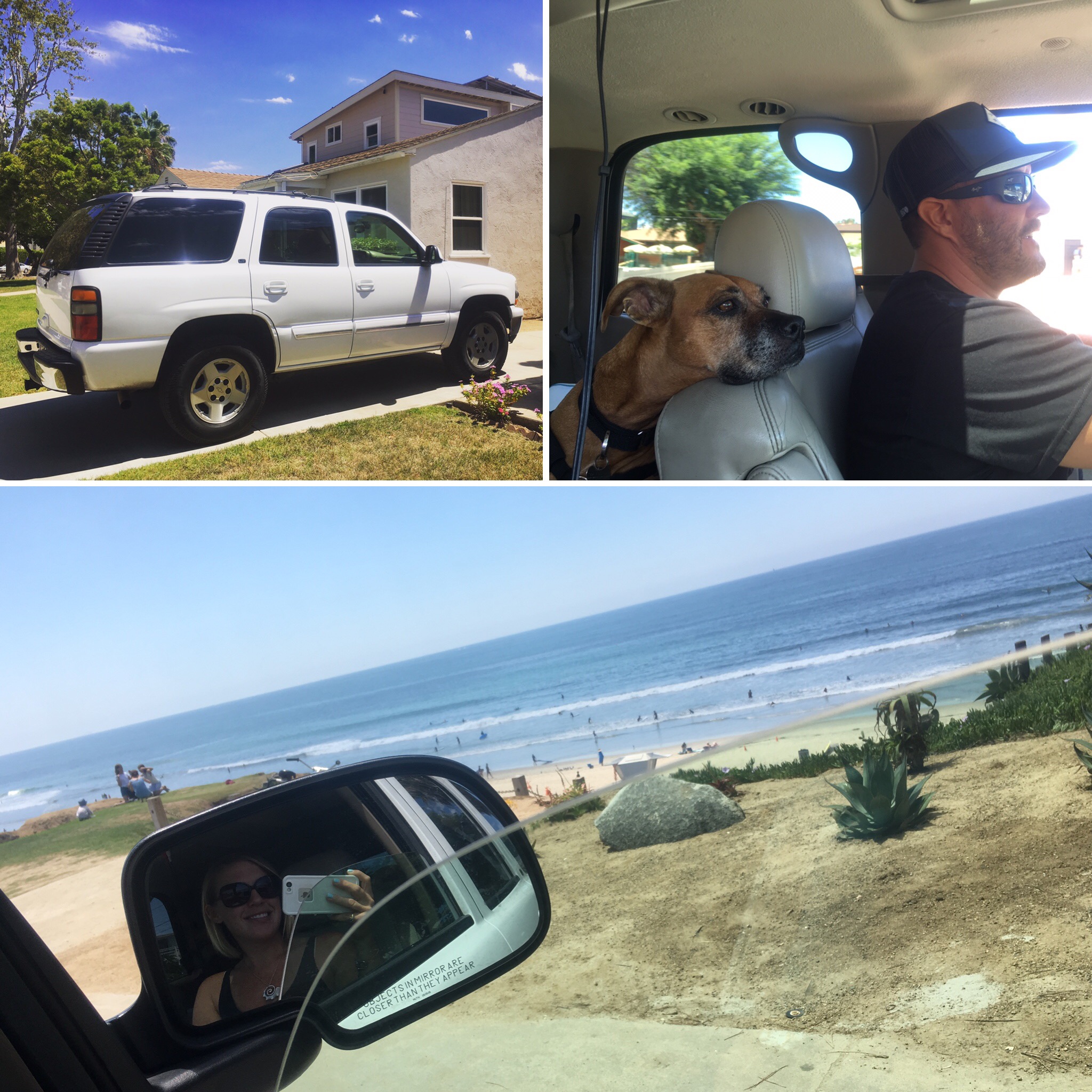 When we saw the trailer again for the first time, we were surprisingly pleased with the condition! Fear of water damage, heat damage, rats and insects had us scared to even open it. A huge sigh of relief came from both of us though as we saw that everything inside was perfectly safe. The plastic hatch/vent on top of the trailer had long since disintegrated in the hot California sun but luckily nothing was damaged by the little bit of water that did come in. There were a few spiders but not enough to gross me out. 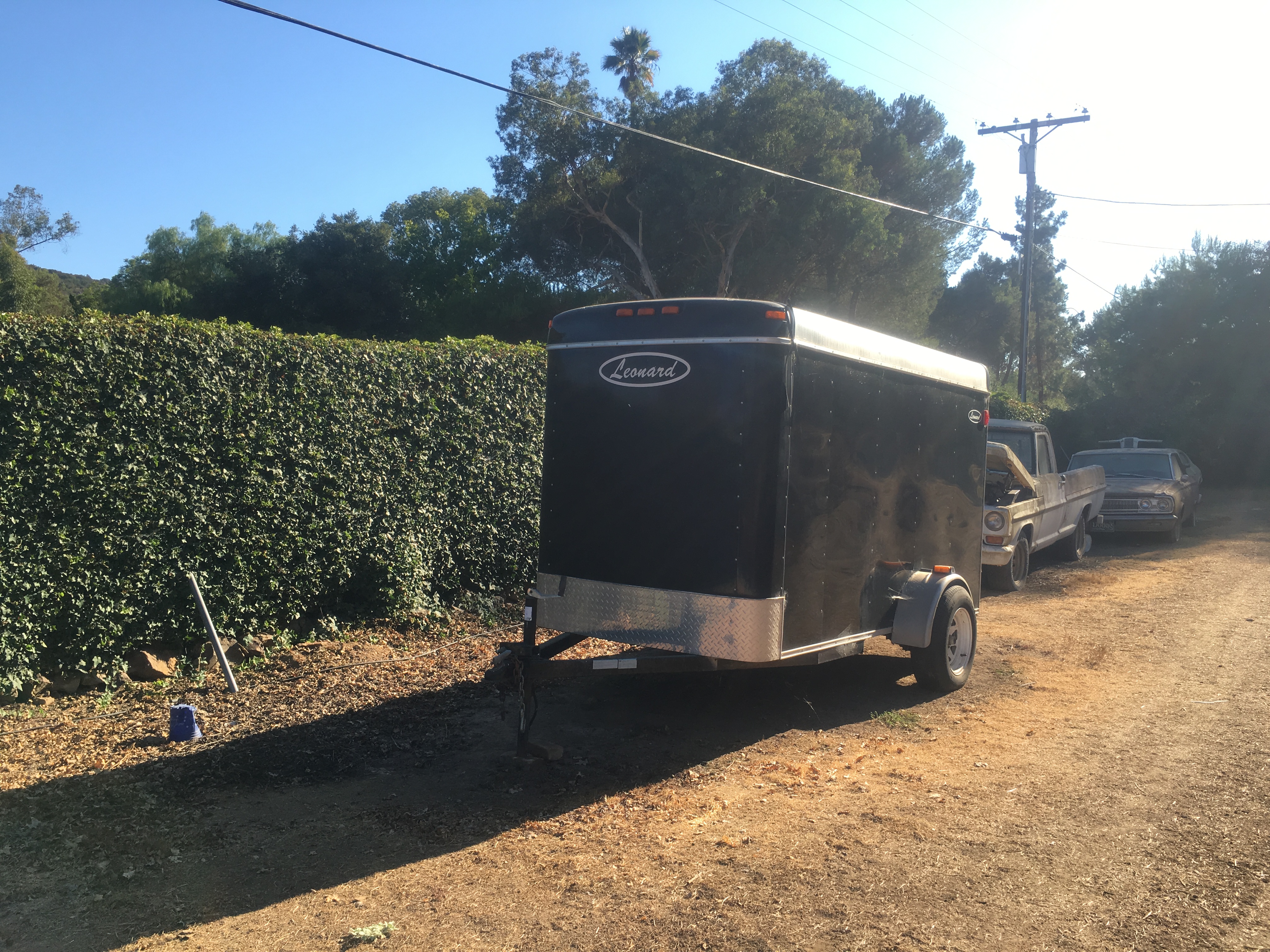 The first order of business was to take everything out and decide what we wanted to get rid of, and what we really wanted to haul up to Washington to store with my family. Some sentimental items like an old rocking chair, photographs and Christmas decorations were definitely being saved.  There were other items inside like camping gear and yard tools that would be very expensive to replace if we ever moved back to land but just not realistic to hold onto anymore. Honestly, we have no plans for becoming landlubbers anytime in the foreseeable future. We gave away a lot of things to Peters family and carefully repacked the trailer with the remaining items – about half of what was there before. 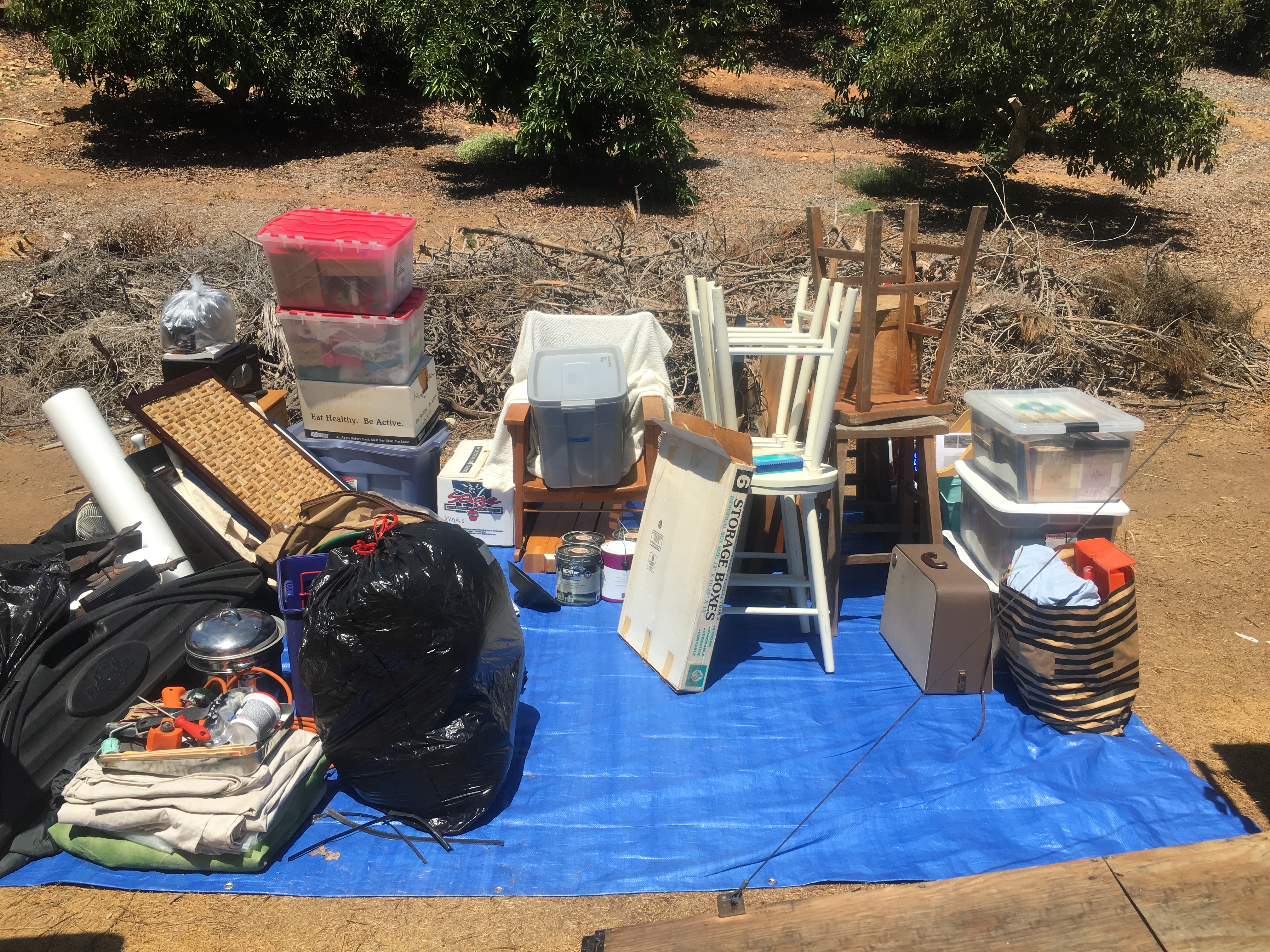 After getting the trailer prepped for our journey north, we continued to enjoy our time in sunny southern California. We visited SO many people, both young and old. Peter and I learned about Pokemon-Go and Uber. So much had changed since we had been there last! 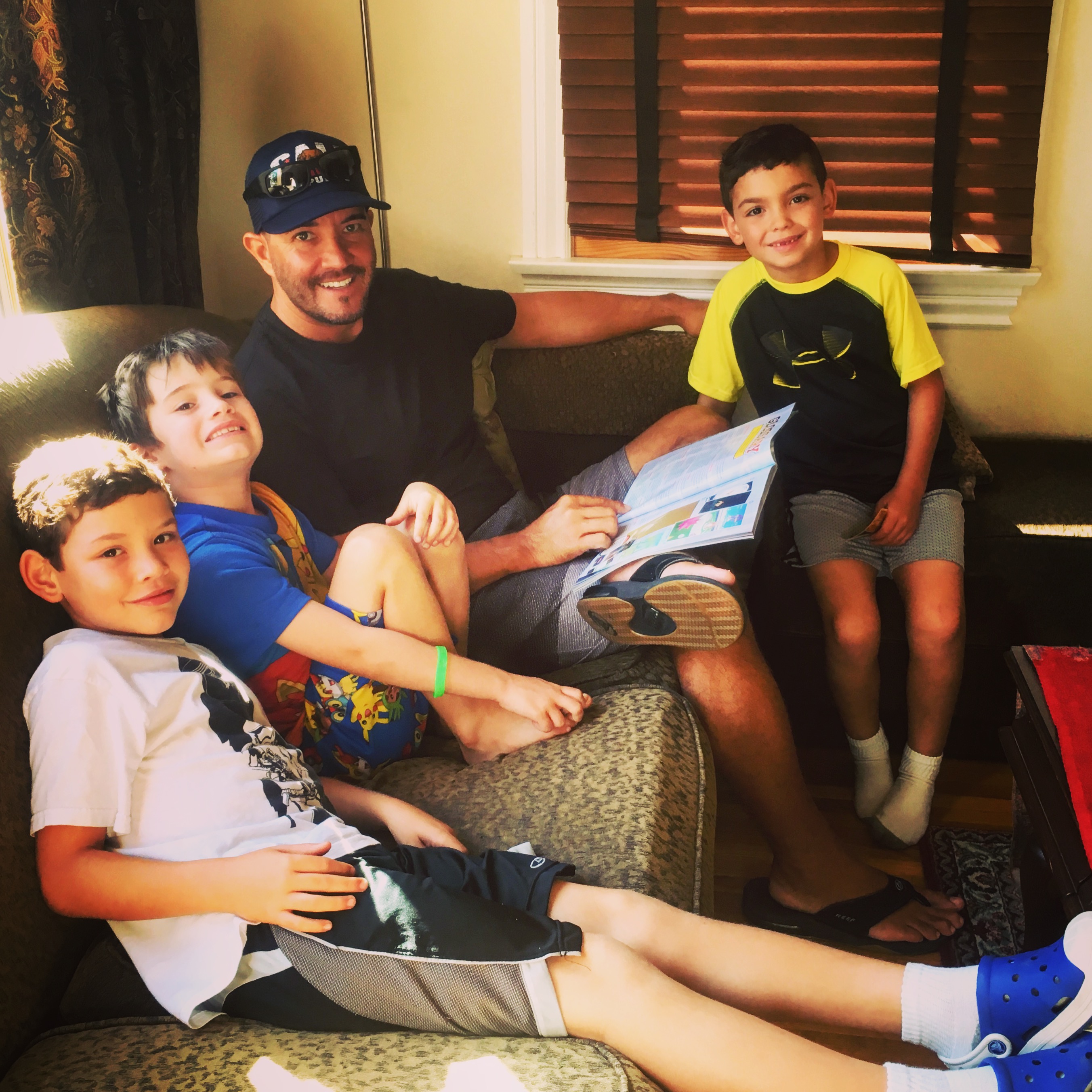 One of my favorite moments was visiting a nail salon with Peter’s step-mom Monica!! I picked out a Caribbean Blue nail polish (to match my ring of course) and tried to explain to the poor ladies why my hands and feet were so calloused :S 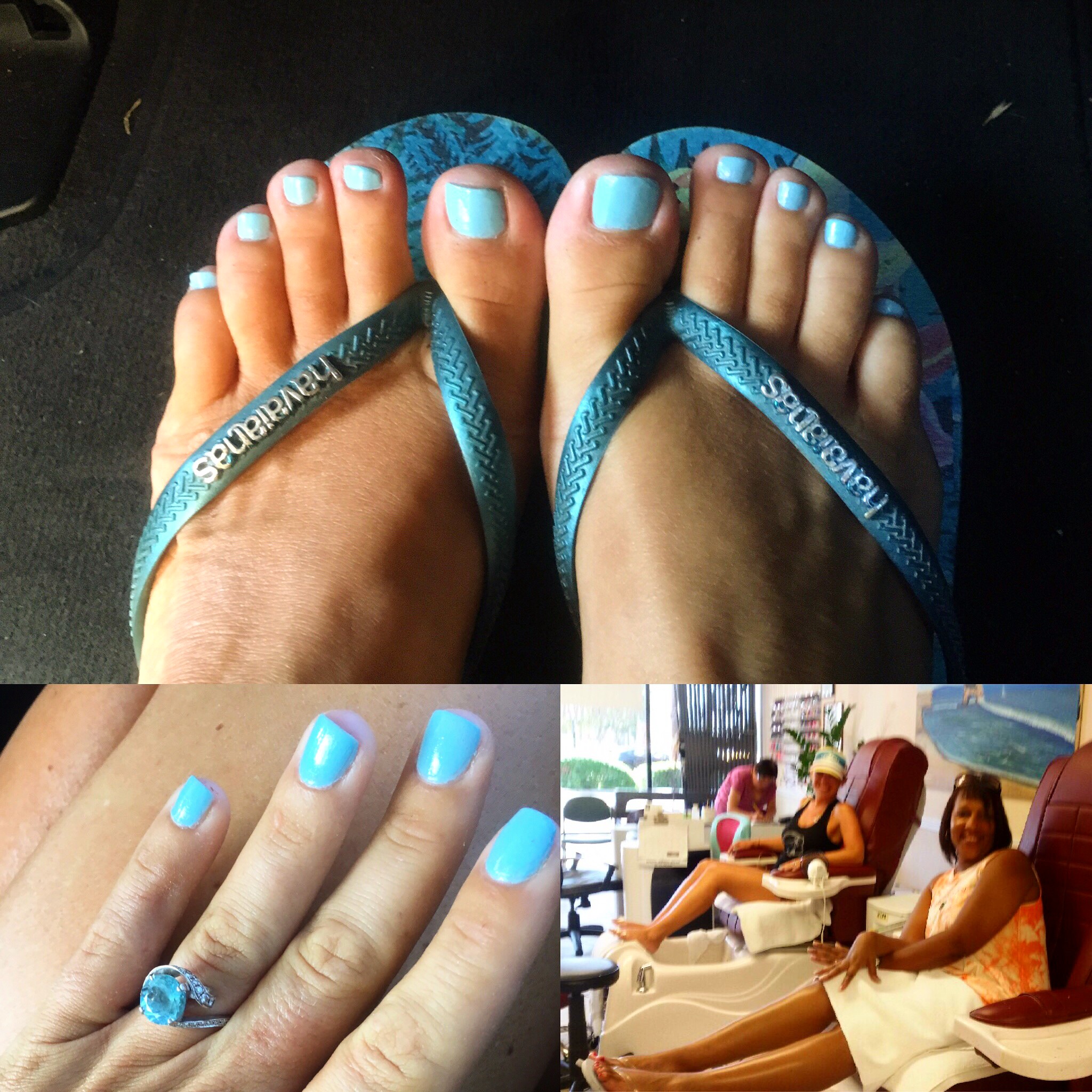 While staying at Wiley and Monica’s house in LA, we ended up doing a little ‘Cesar Milan’ work with their dog Little Man. He had this complex where he would “claim” their entire dining room table and every chair around it! Apparently he had been doing it for years and they couldn’t even have guests over. After watching a very short Cesar video on YouTube I set to work to claim back the table and chairs :) The picture below was taken by Peter while Monica was at work one day. She could not believe it!! Not only was Little Man allowing me to sit in ‘his’ chair, he was sharing his new bed with Betsy :)

I am SO proud of Monica for how fast she learned how to do what I did. She couldn’t believe how easy it was to change her energy and her actions, which in turn allowed Little Man  to be less stressed and calm and submissive! Monica has happily reported that after we left, she is still able to sit at the table whenever she wishes. Yay!!! 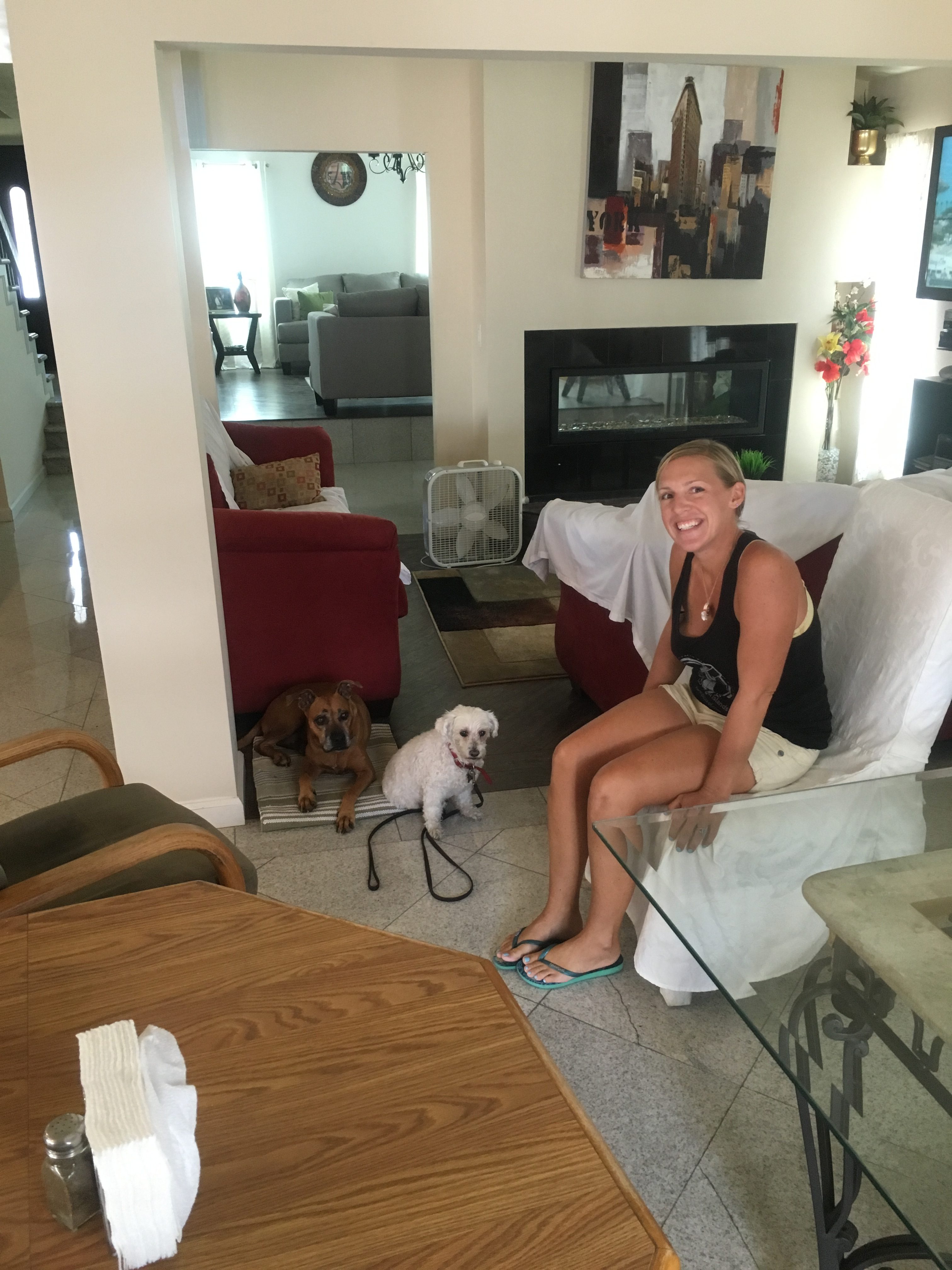 With lots more family to see, we drove all over southern California. 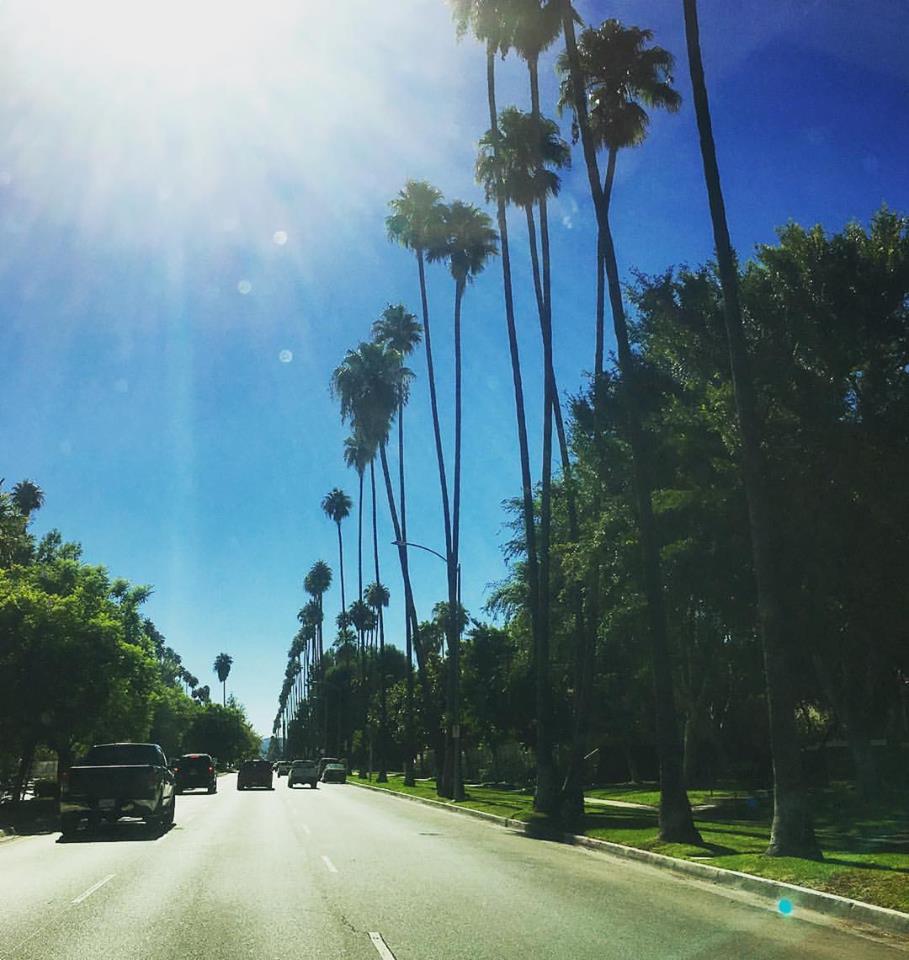 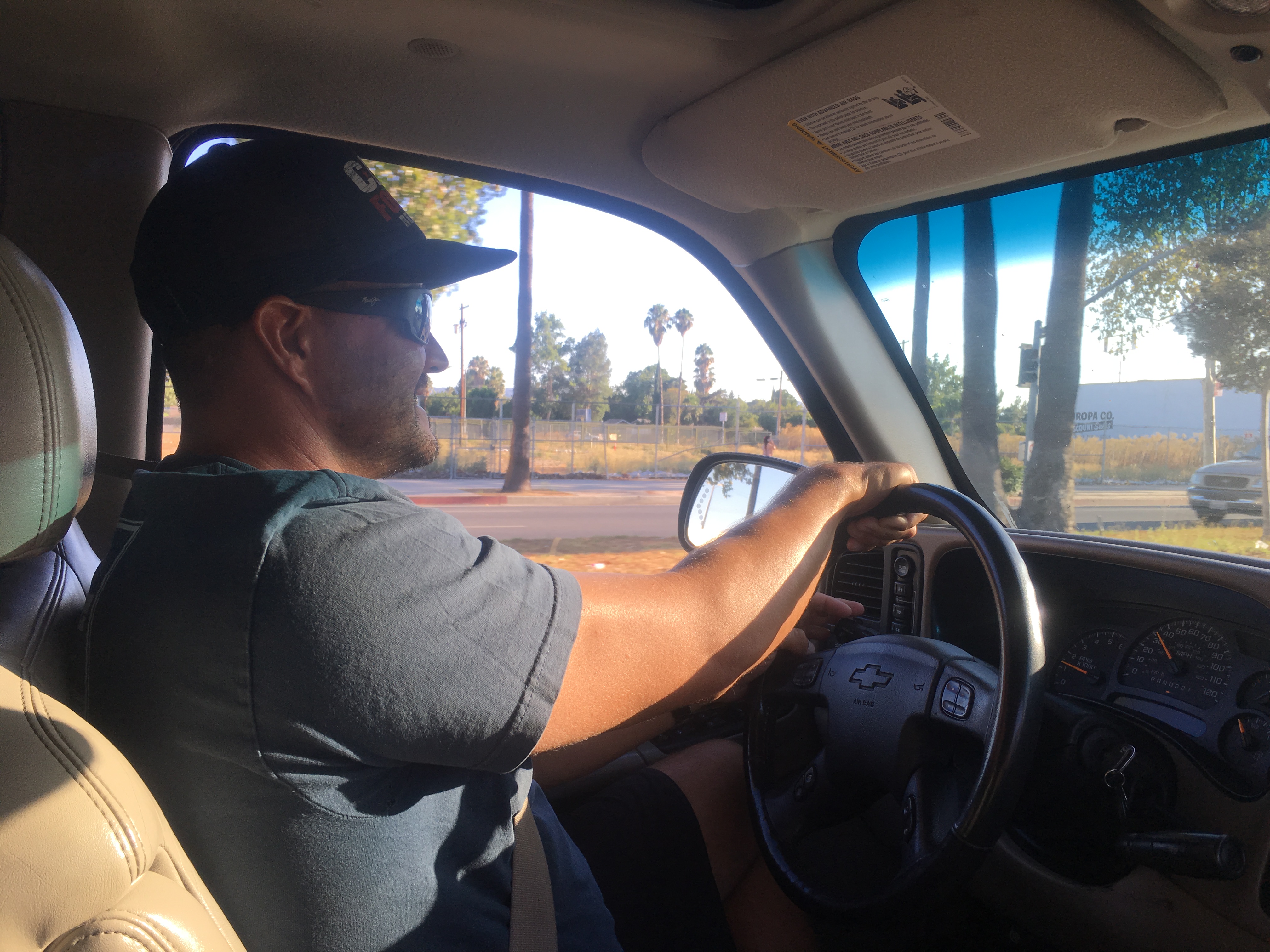 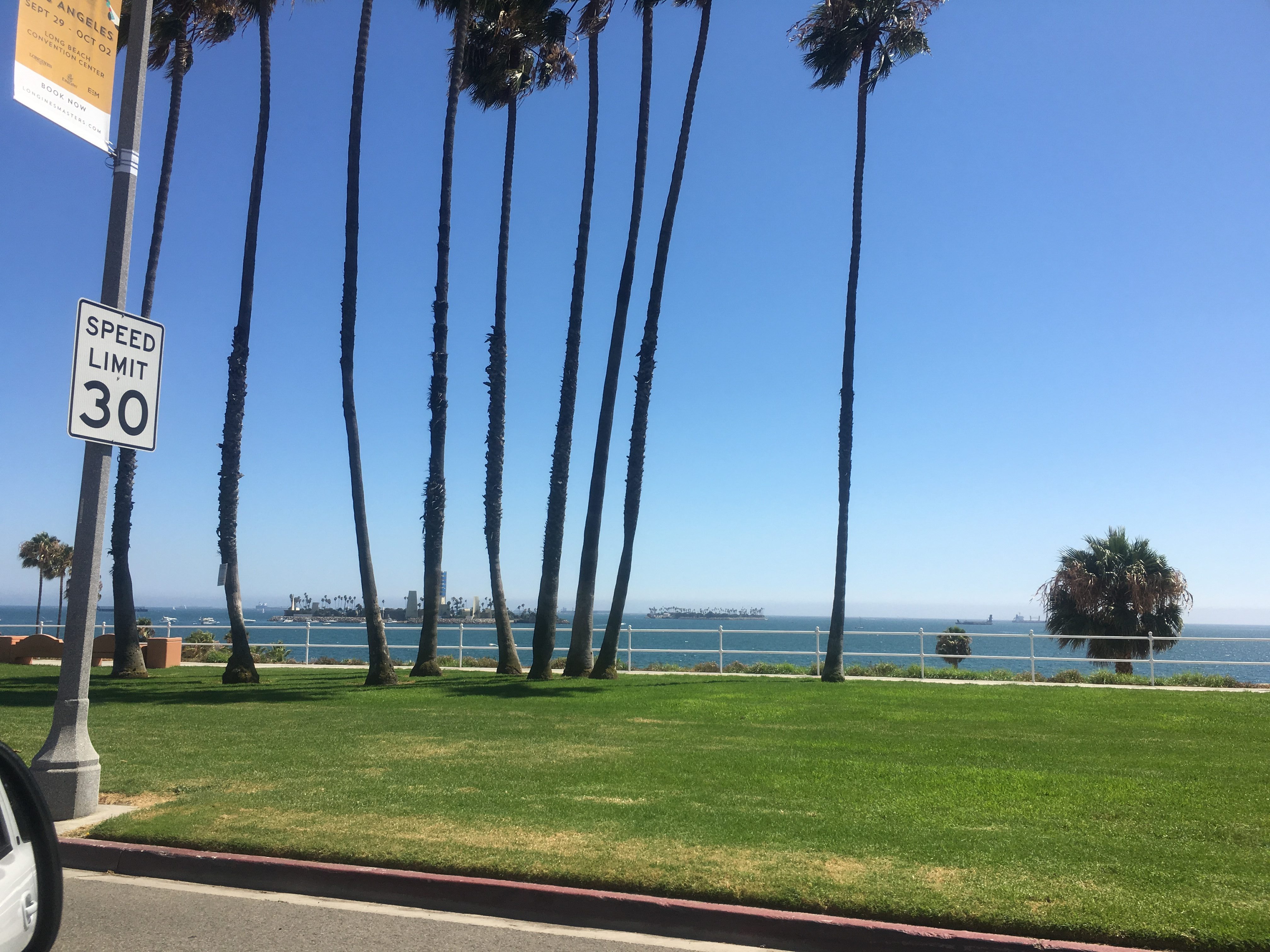 I’m SO happy we got to see my friends Jen and Mark one afternoon as we passed through Orange County. Before we left three years ago, Peter and I had attended their baby shower for their first child, Isabella. I was heartbroken I couldn’t be there when she was born, and even more heartbroken I wasn’t there when she had her second baby, Jamison. Jen and Mark were very good friends of mine since the time I first moved to California back in 2008. Even though we only had a few hours with them, it was definitely a highlight of my trip. Their babies are so beautiful, so very sweet, and so lucky to have such good parents! 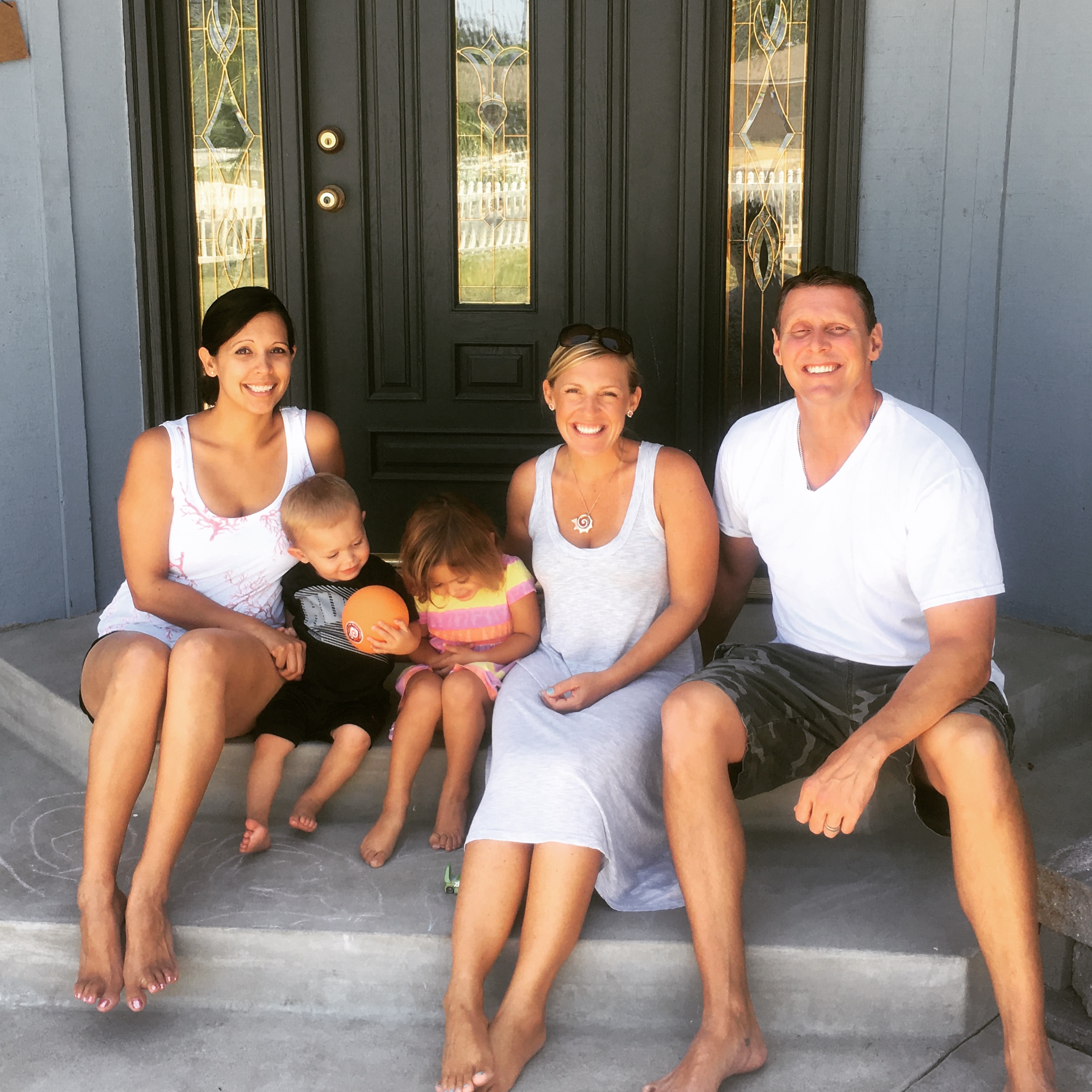 At Peter’s Aunt Lucy and Uncle John’s house, his cousin Kayleigh found a way to sneak Betsy up on the only couch she wasn’t allowed on ;) She wasn’t deprived of cuddling, that’s for sure. This was our home-base in San Diego. We had the most amazing home-cooked meals thanks to Aunt Lucy, and we even started running in the evenings. During the days we bounced all around visiting friends and our favorite places in our home away from home – Sunny San Diego. 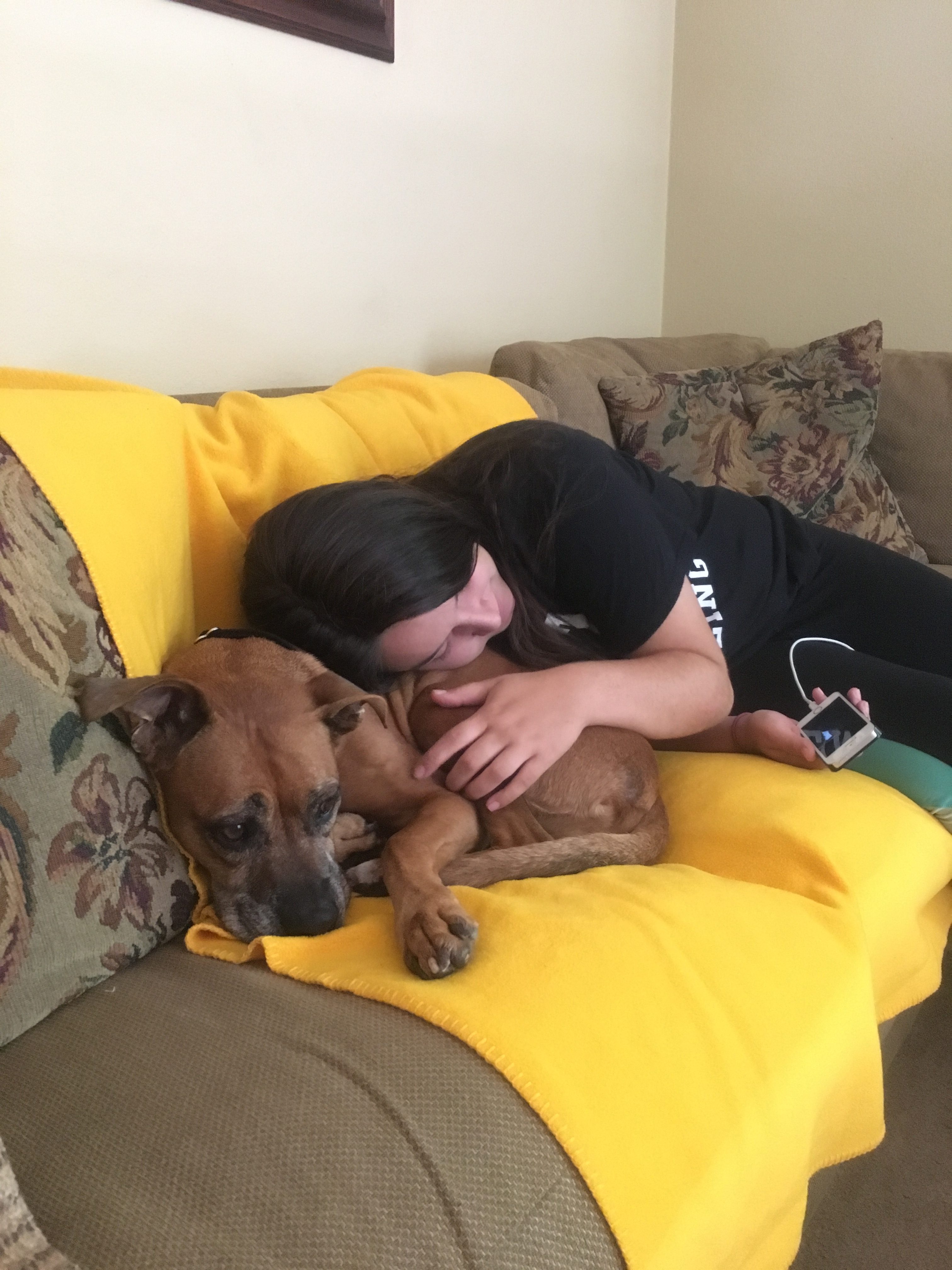 Another luxury I treated myself to was scheduling a visit to see Rob – the best hair stylist in San Diego – at The Park Salon! It was SO nice to walk in and be offered wine, soda, water, coffee or tea, then get shampooed in a special room that could also double as a meditation room, which ended with an amazing shoulder massage – just in case I wasn’t relaxed enough – followed by laughter and chit chat without ever having to describe what I want done because he’s that good. Even though I have a harder hairstyle to cut, Rob knows exactly what to do. Back in the islands I never ever got my hair cut because no one knows how to my cut the right way! Sigh. What a relief to pay for a service where someone actually knows what they are doing!! Maybe I can convince Rob to bring his family to Tortola to open a salon!! ;) 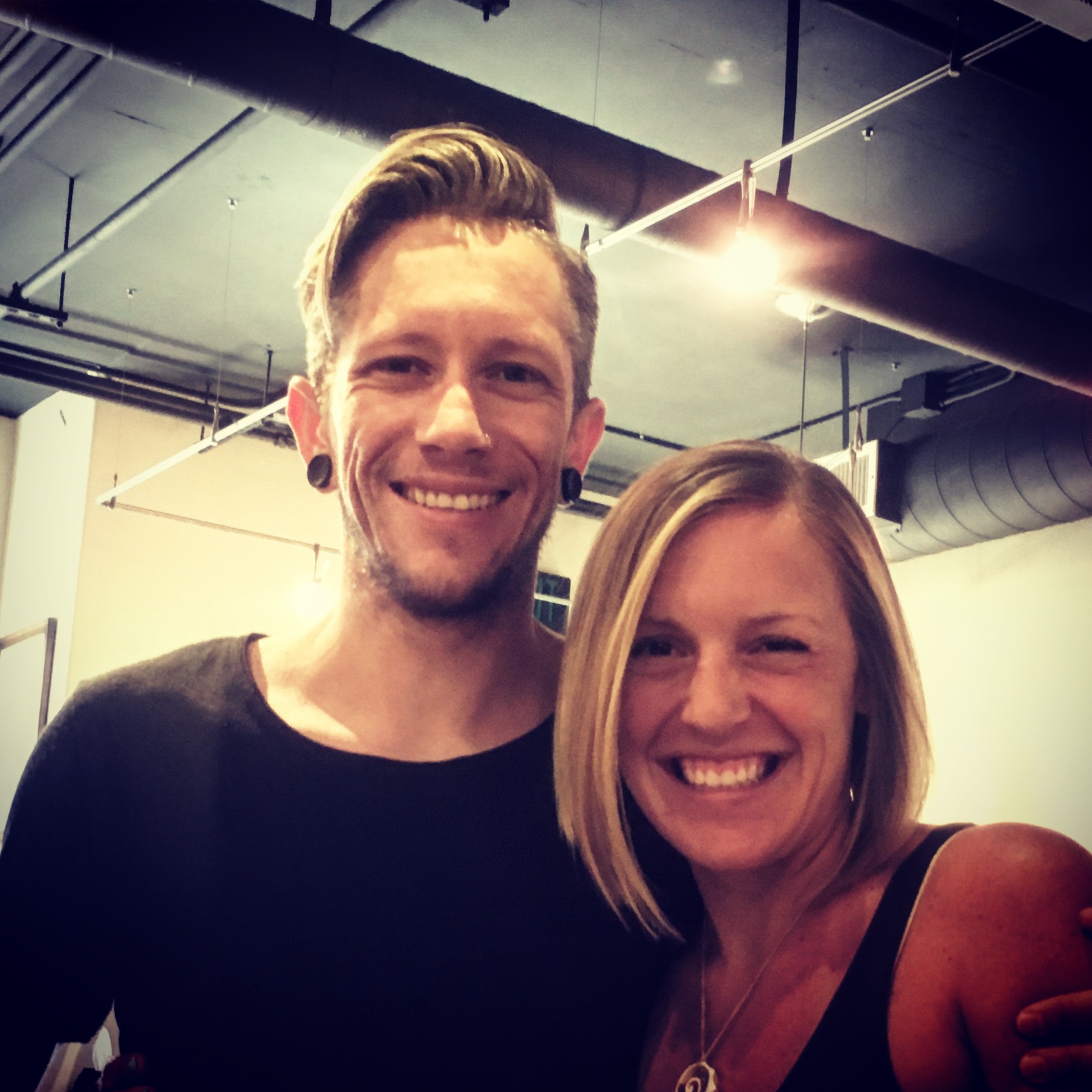 Speaking of the park… we visited a few real parks, with real green grass and open spaces. Peter played baseball with his little cousins at Kate Sessions park in San Diego and of course he learned how to hunt for Pokemon. 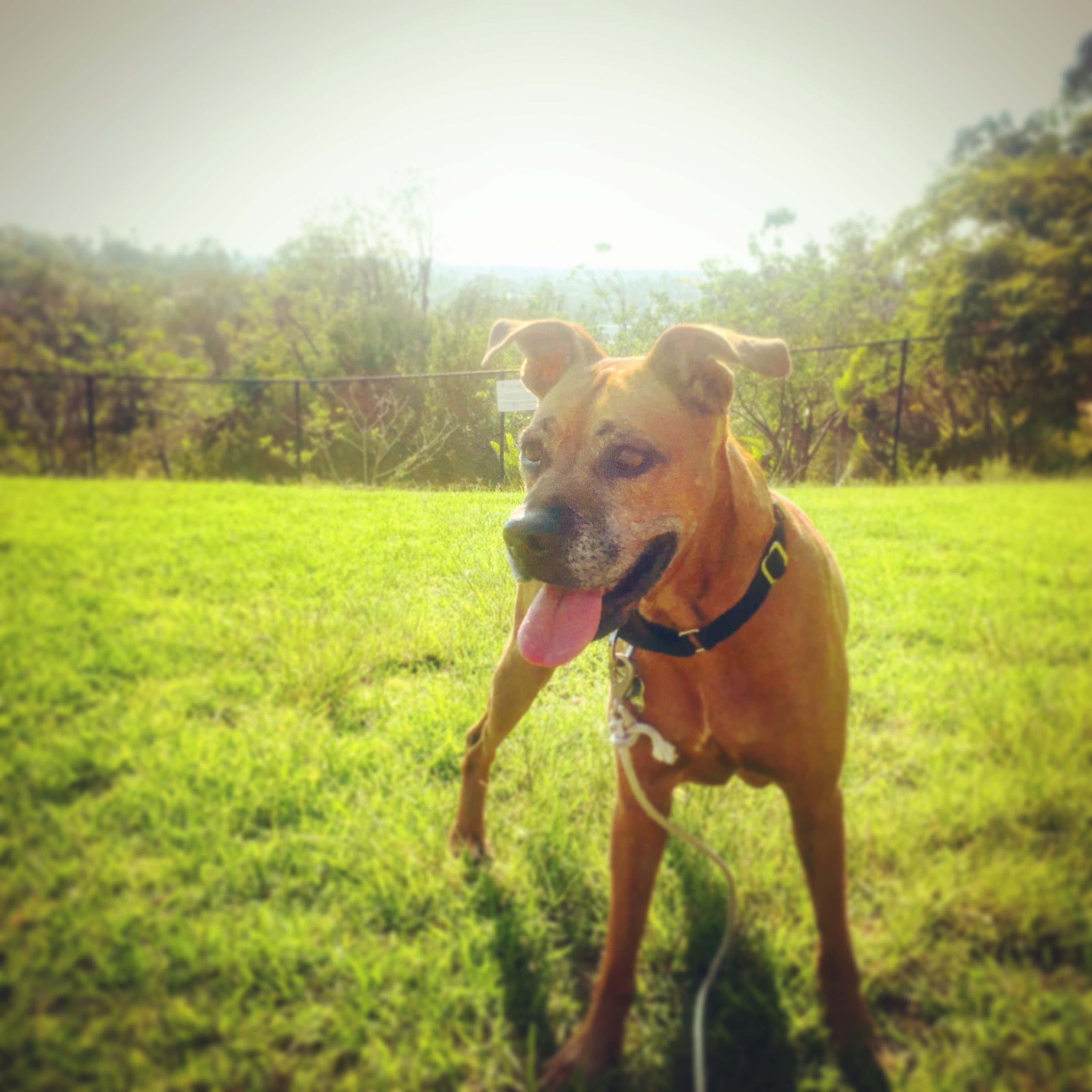 We visited my sister Annie and met her incredibly charming boyfriend Charlie! One of the items we found in the trailer was Peter’s old skateboard that Betsy used to tow him on. Annie loves skateboarding so we thought it was a very appropriate gift for her. When we brought it out to show her, I think Betsy was just as excited. She instantly remembered what to do and Peter took her for one final run. She went nuts!!! 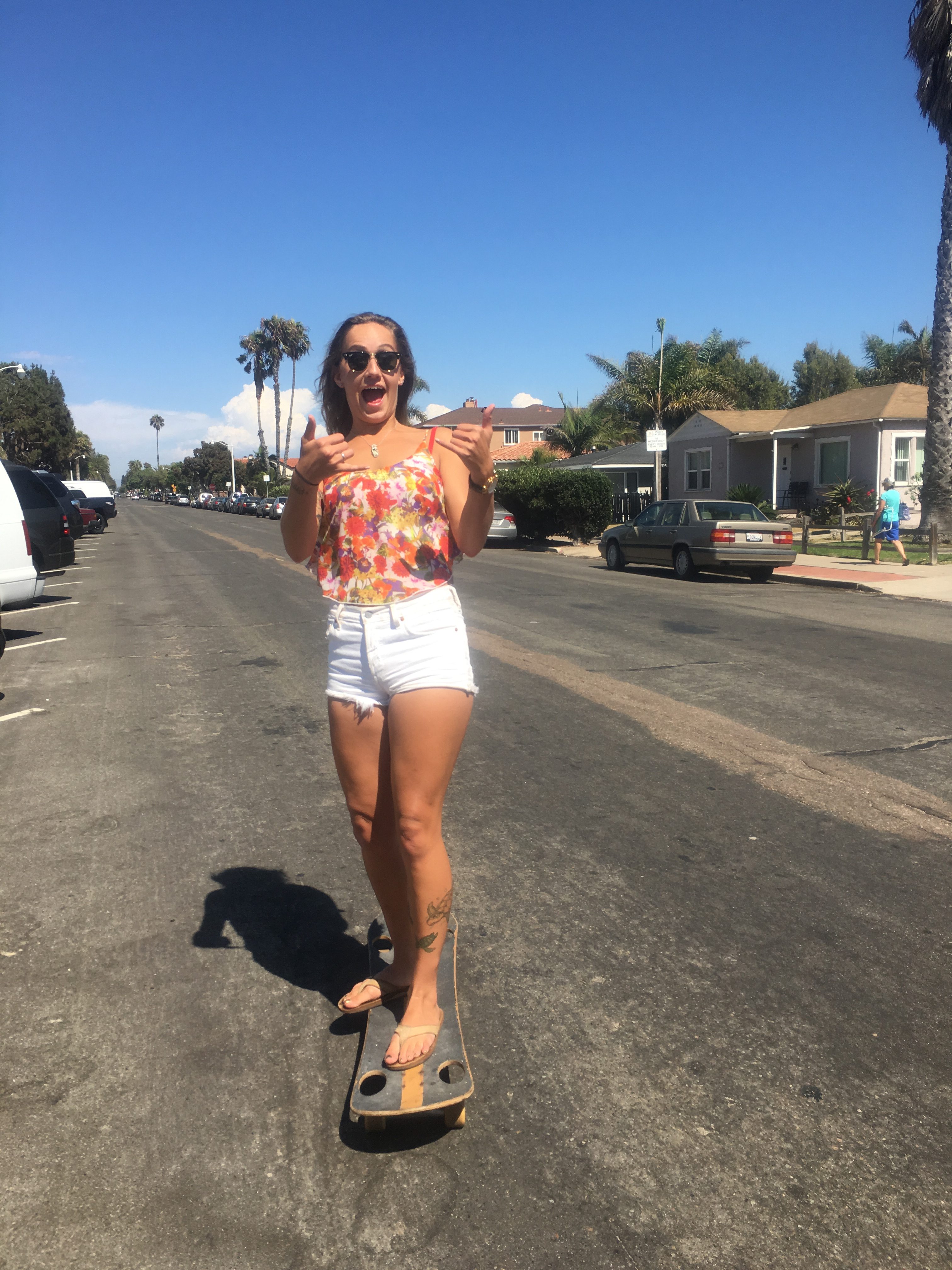 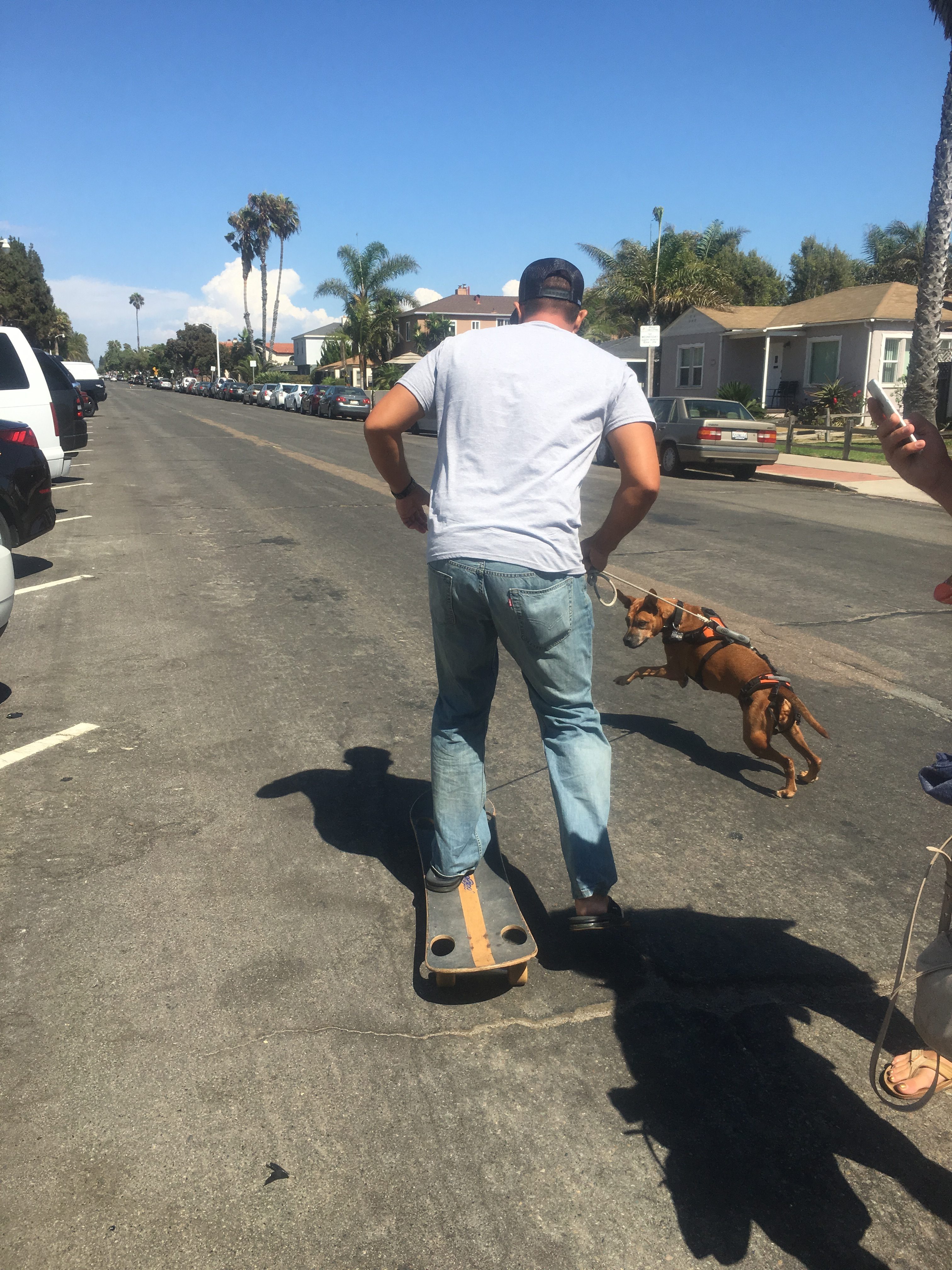 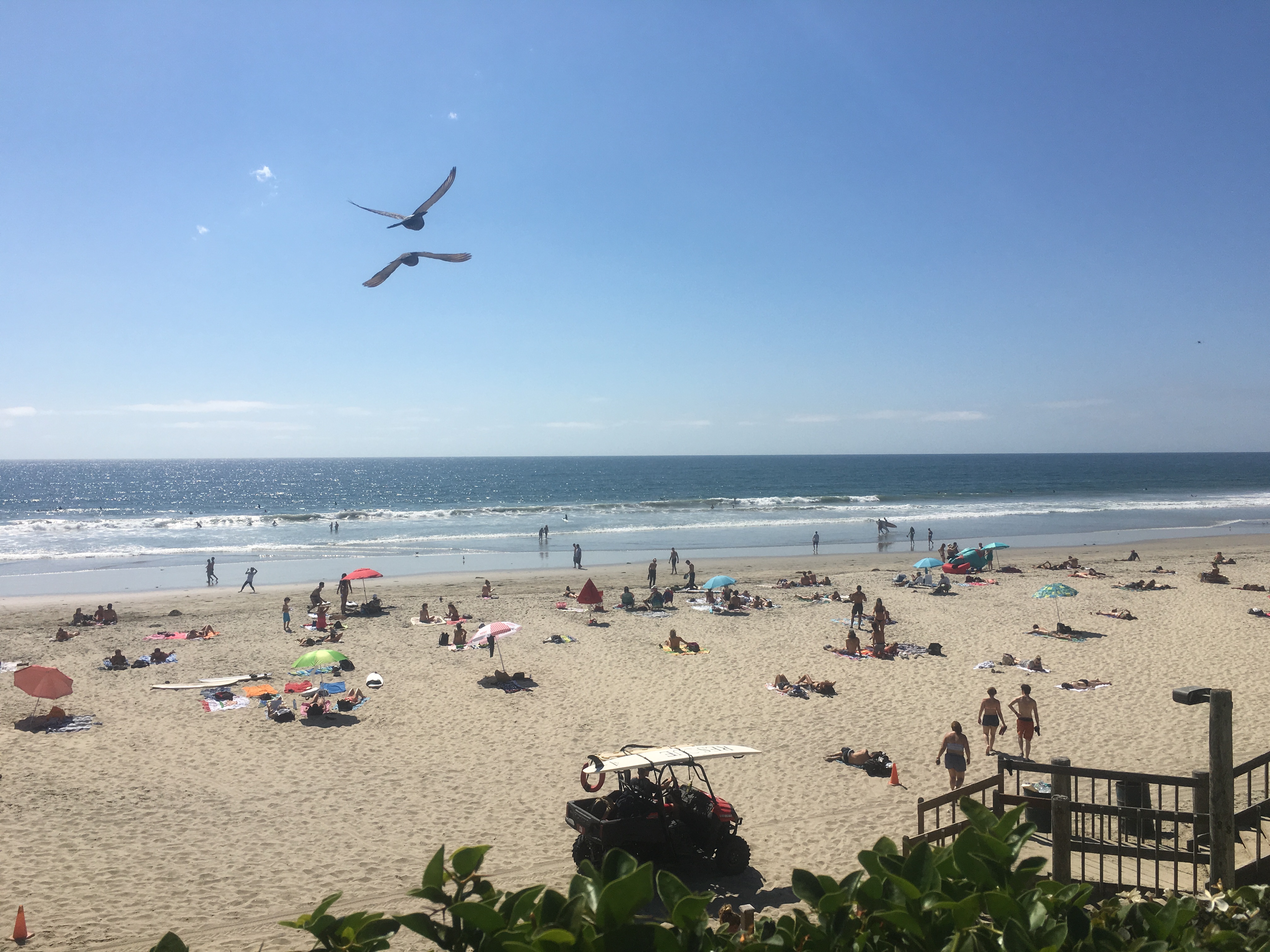 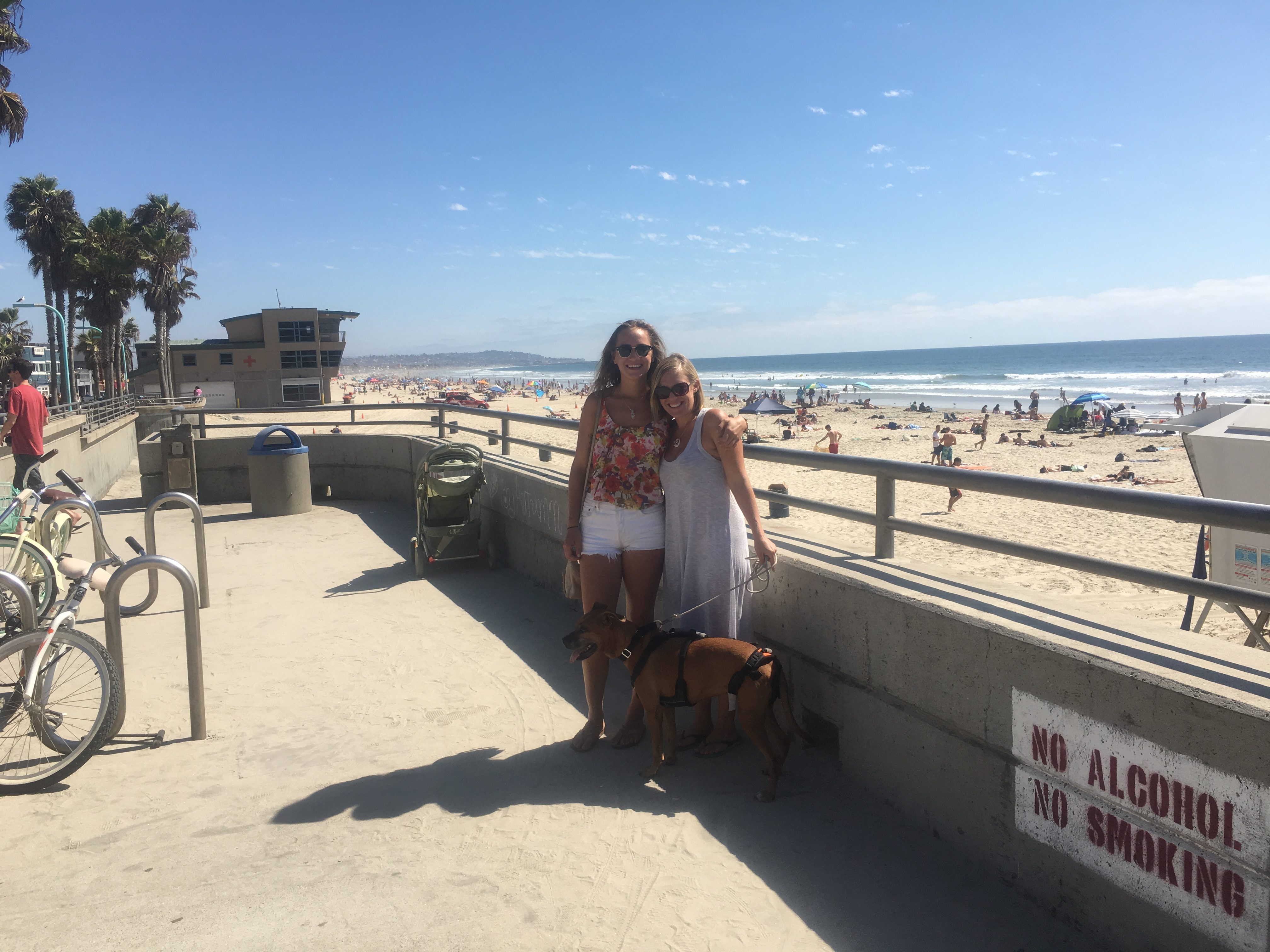 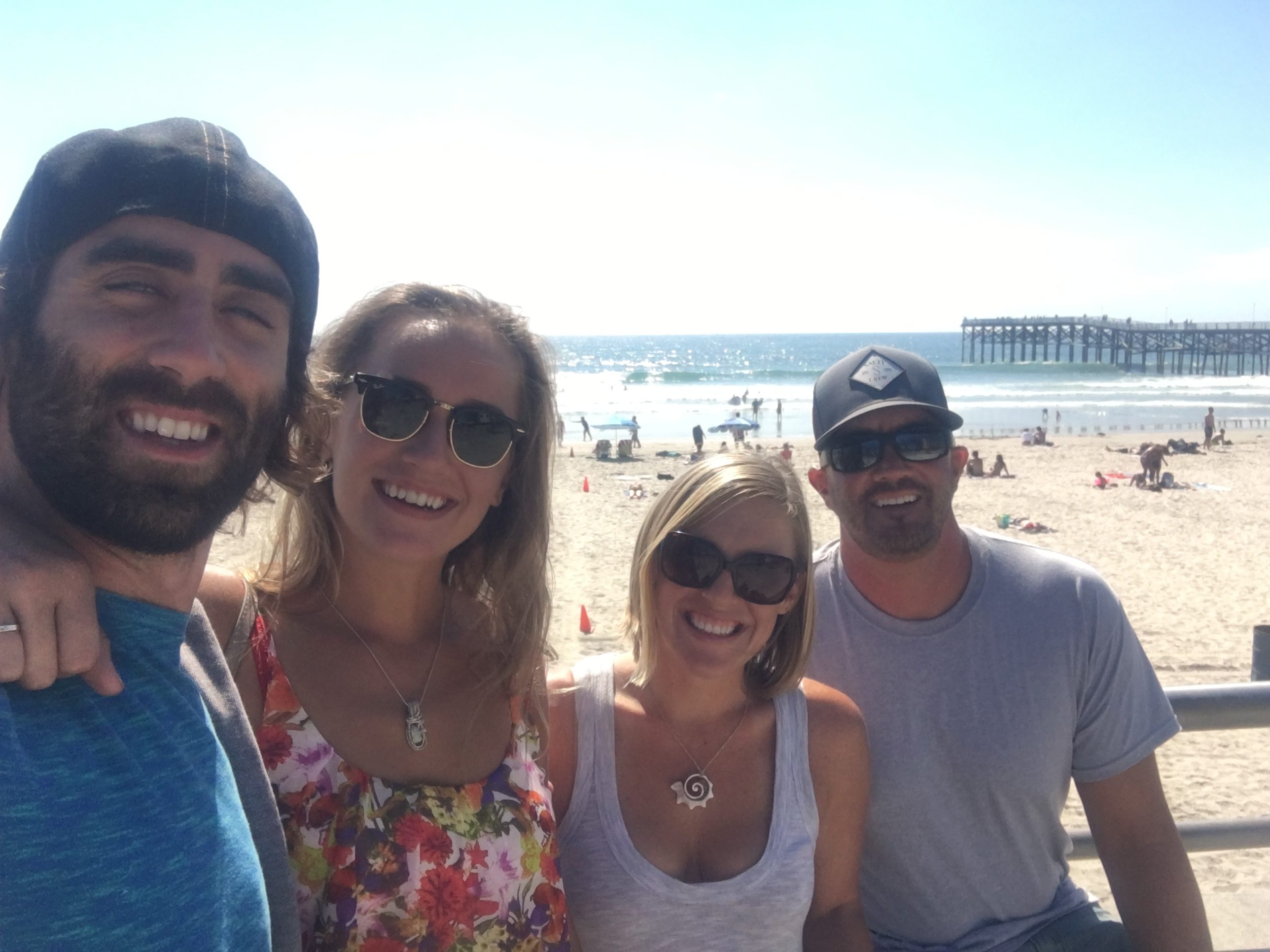 The beaches were just how we remembered them. A cool, crisp breeze with the warm sun kissing our faces… It’s a totally different kind of beach here. 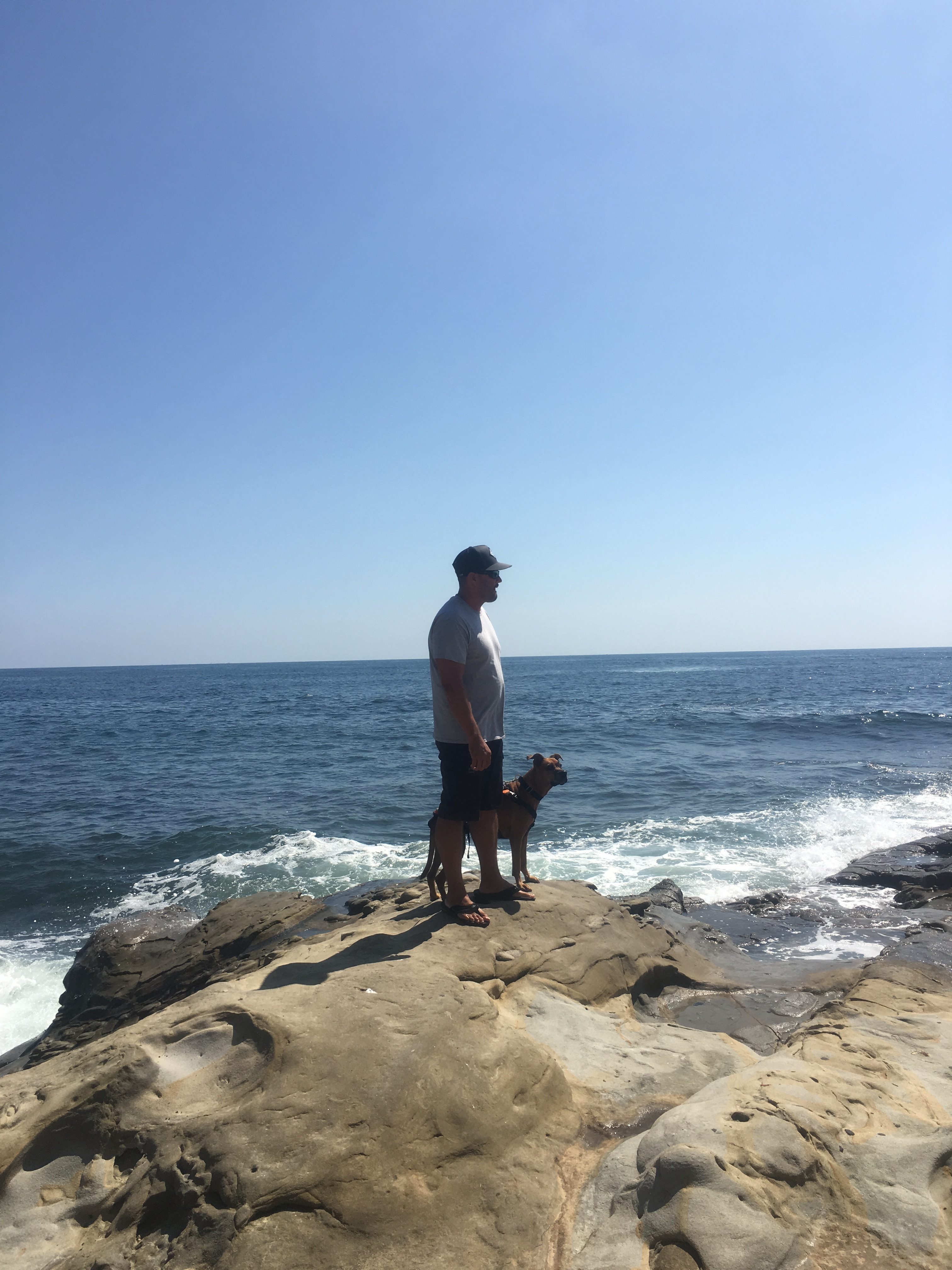 Peter did manage to get in some surf while we were there. We stayed at the South Carlsbad campground – camping out in our awesome Tahoe – and had a bunch of friends come visit. While we didn’t get to see everyone, we both saw some of our closest friends. We did our best to not get too overwhelmed with scheduling all of our visits though it was a very daunting task to try to align schedules with so many different people in so many different places. For those that we missed, you’ll just have to come visit us in the islands! 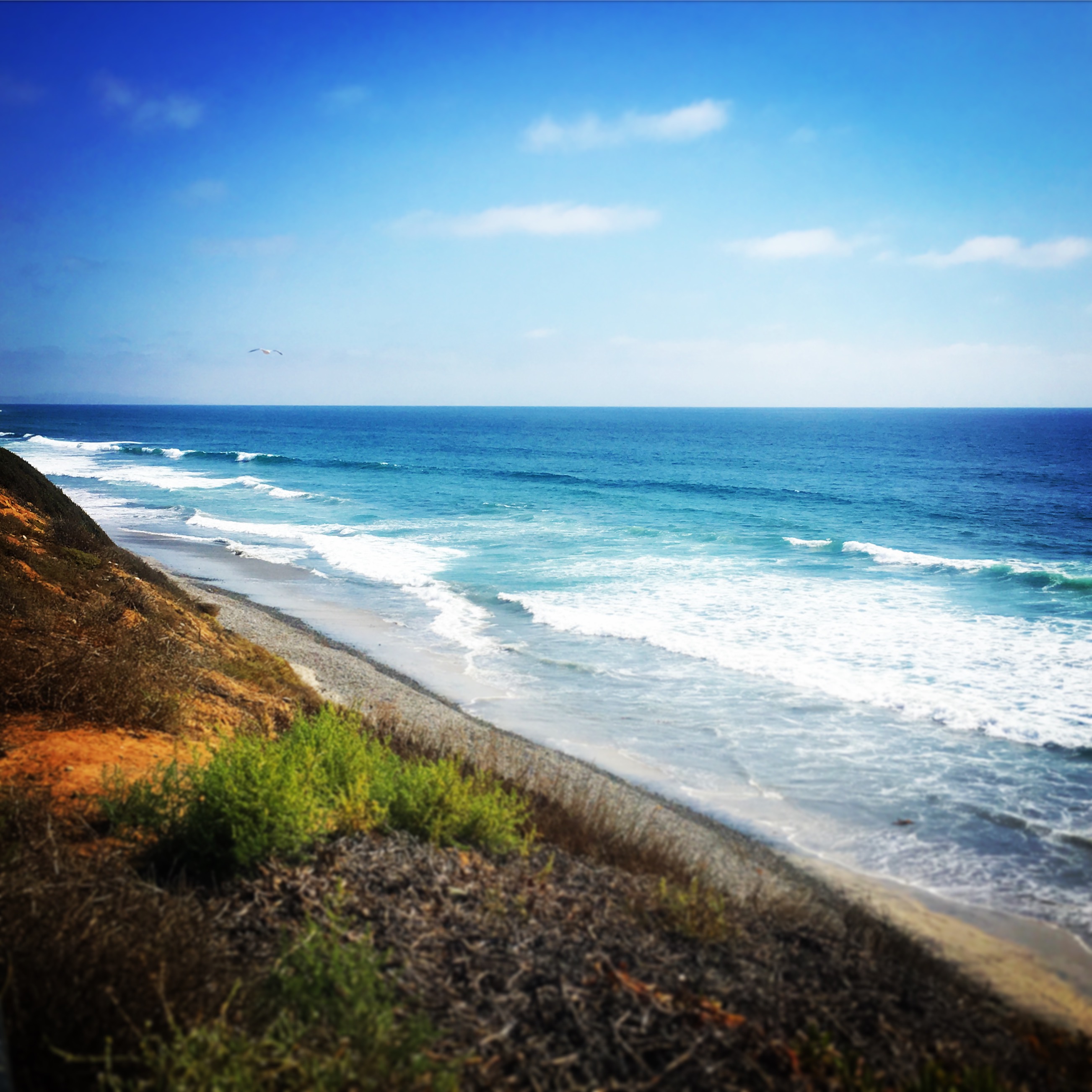 Up next… how Peter was almost eaten by a Sumatran Tiger!!