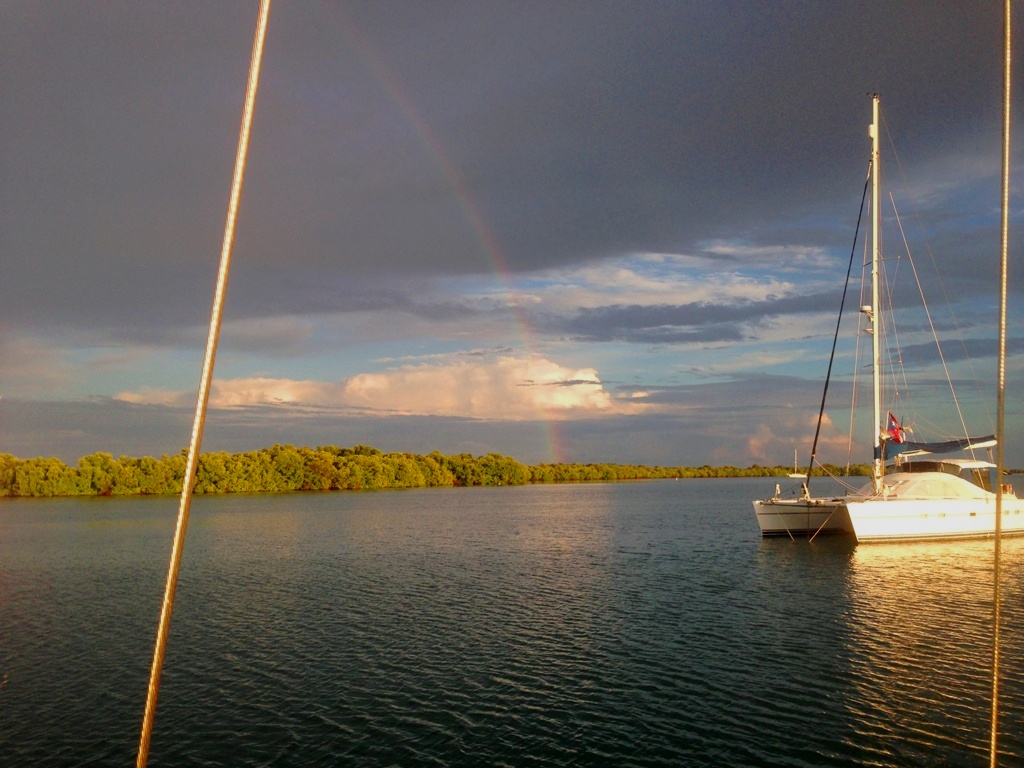 Our perfect Mona Passage crossing landed us on the Southern coast of Puerto Rico, in La Parguera, around 8am the morning of May 6th. We spent two nights resting at anchor near the mangroves just outside the town.

We didn’t find La Parguera to be “cruiser friendly” at all. There was no dinghy dock but a few of the local shops on the water let us tie up to their docks while we took a look around. On a second trip to shore, we found it was much easier and more welcoming to buzz up to the deserted boat ramp and tie up to the mangroves wading in to shore. No one was there to give us funny looks and it was off the beaten path which also seemed a bit safer. The town felt dirty, and not much nicer than some of the places we saw in the DR. We hoped to find some cheap authentic and tasty Puerto Rican food but our tastebuds were completely underwhelmed. Other cruisers we met along the way told us they loved La Parguera… maybe they visited other parts of town?

The remainder of our time here was spent resting on the boat. There was much sleep to catch up on after the last week of night crossings. It’s amazing how turned around your body can get sleeping during the day and staying up all night, then trying to switch back to nighttime sleeping.

On the second night, we finally began to feel a little more adventurous and took the dinghy two miles east to the Bioluminescence Bay as recommended by several locals and our Active Captain overlay in our Garmin App. As the darkness surrounded us, we sat and waited. The water was still and all was quiet. We were the only ones there. Soon, splashing our hands in the water generated small glowing streaks of blue light. We zipped in circles around the bay while huge balls of light shot out from behind the dinghy like fireballs in Super Mario Brothers. It was a pretty cool sight to see. About an hour later, we cruised back to our boat between the mangrove islands following the tracks on our iPhone Garmin app. The charts aren’t completely accurate here, placing safe water where shoals and islands reside, but we trusted our tracks in the pitch black.

A good habit to get into when arriving in a new anchorage is to stop by and meet the neighbors. We like to meet other cruisers anchored nearby and check in to see if they have any local knowledge – good, bad or otherwise. SV Rainbow was the only boat there with us. We had heard of Mark and Tina in the news several months back after they were brutally attacked on Rainbow down island. Tina was away from the boat at the time but we got to talk to Mark for awhile. The cruising community is a small world and the farther we travel the more we are meeting people with mutual friends. We learn so much from stories we hear and the experiences of others. Mark had some great tips for us on a few of the places we planned on visiting.

Mark also had a current weather report and our magic window appeared to hold up for just one more day before turning nasty. We pulled up anchor that afternoon, hoping to sweep under the nearly non-existent Puerto-Rican night lees. The wind and waves we faced on the Southern Coast of Puerto Rico were just as rough as the North Coast of the DR. The current swept us back while our 80hp Ford Lehman engine chugged along beating straight into the wind. We tacked off shore and back in again several times trying to make forward progress.

We motor-sailed our little hearts out. It was a last minute decision to skip Ponce and push on for Salinas. We had read such bad reviews about the anchorage at Ponce and after our less than enjoyable experience at La Parguera, we opted for a warm welcome in a “cruiser friendly” and safe anchorage. The journey there was rough, but we made it. We watched another gorgeous sunrise and took down the sails in the early hours of the morning. We both had a huge sigh of relief as we motored slowly into the harbor where the seas instantly turned to glass. We knew we’d be safe when the winds picked up in just a few short hours.

Stay tuned for a few highlights from our time in Salinas! We’re in St. Lucia now and have so much to share with you about all our adventures!!