Monday morning 4.21 we pulled anchor at 8am in George Town after making breakfast, coffee and getting through our morning routine with the dogs. SV Krow was about 20 minutes ahead of us. We navigated out of the harbor south from San Dollar Beach and watched anxiously as Krow’s mast flung wildly back and forth like a metronome as they made their way into Exuma Sound. If the waves were rocking a 50′ Valiant that much, we would surely be experiencing more action than that very soon.

Previously satisfied with the way everything was stowed below deck, I did one more sweep of the entire boat to triple check that nothing would go flying. The dogs were happy and looking around. Peter put us on course to the northern tip of Long Island.

2-3′ seas and 10-12 knots carried us away into Exuma Sound on a beam reach with all sails up. The motor was off and all was great. 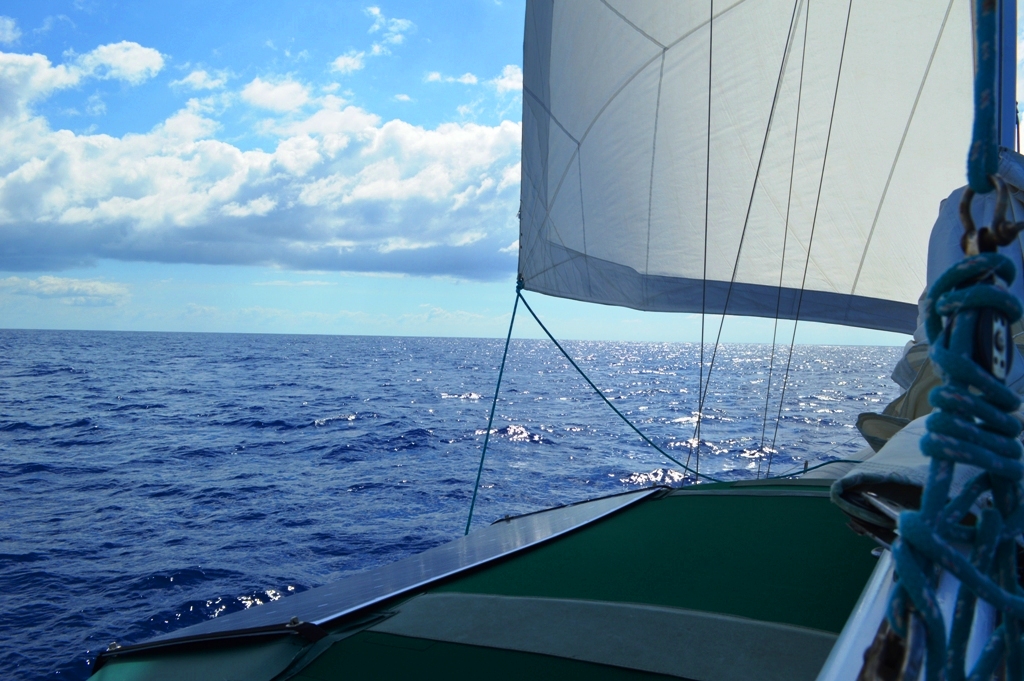 Rounding the northern tip of Long Island got a bit scary. The winds picked up to 15-20 knots with gusts of up to 25. The seas quickly grew to a relentless army of 5′ waves with the next charging at us right after the last as we traveled downwind. Another reminder that “when it’s time to reef, it’s too late”…

Sailing in conditions like this is new to us and we had a heck of a time getting the boat back under control and getting the sails down. 5′ following seas in 20 knots was just too much for us to keep any sails out that day so we turned the engine on, pointed straight into the pummeling waves to get the main and mizzen tied down. Peter had to bring them both down by himself since there was no way our autopilot was going to let me get away from the helm. It took every ounce of concentration I had to keep us dead center into the waves. As each one crashed over the bow my knuckles grew whiter and whiter. Peter was out on deck doing a fantastic job tying up the sails despite the stormy conditions. The whole ordeal took us about half an hour.

We were finally ready to fall off the wind and make a 180-degree turn to port. Mary Christine flung around like a ragdoll as we got back on course. The smallest slip of the hand or over-correction of the wheel would push us back broadside to the waves as she yearned to point dead into the wind. Every second had to be anticipated. All afternoon we held our compass heading and steered by our peripheral vision watching the rolling waves sweep under our stern gushing toward the bow.

Of course it wouldn’t be a passage if our fishing lines weren’t out. The zinging of the reel quickly changed our mood from high anxiety to bubbling with excitement. We landed our first Mahi Mahi while aboard the Mary Christine. It as about 20 lbs, not too bad! Somehow the fear fo the 5′ waves slowly disappeared as I helped Peter filet the fish on deck. The autopilot held well enough now that the winds had died down a bit. This fish would give us 5 meals each with plenty left for the dogs. 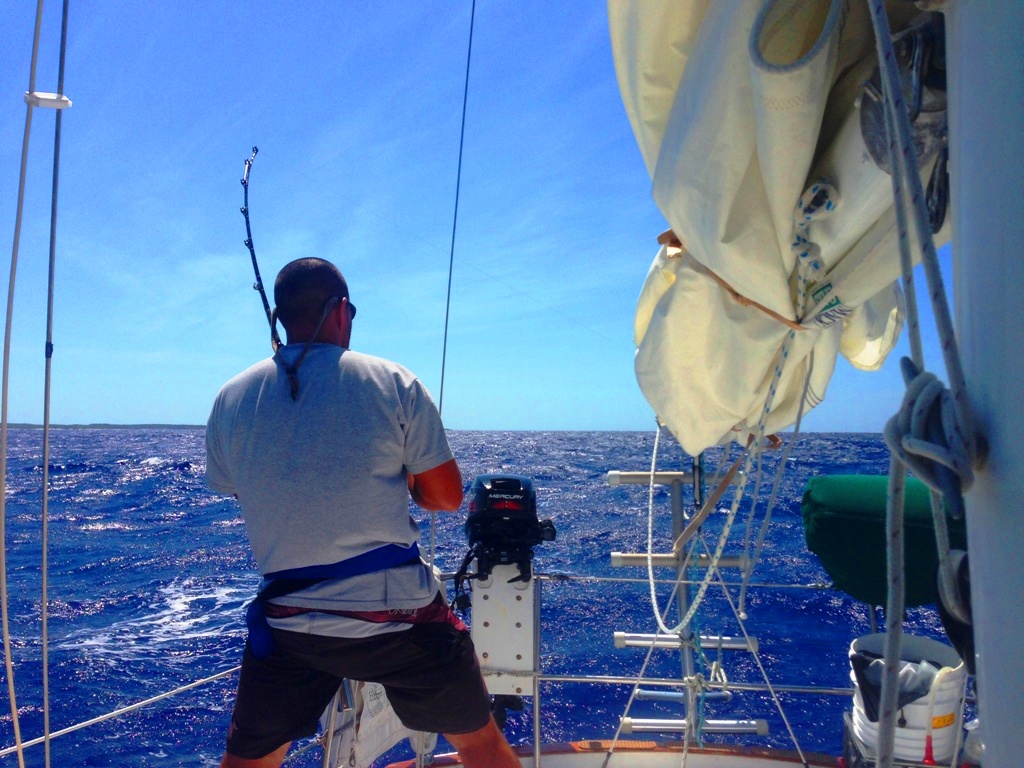 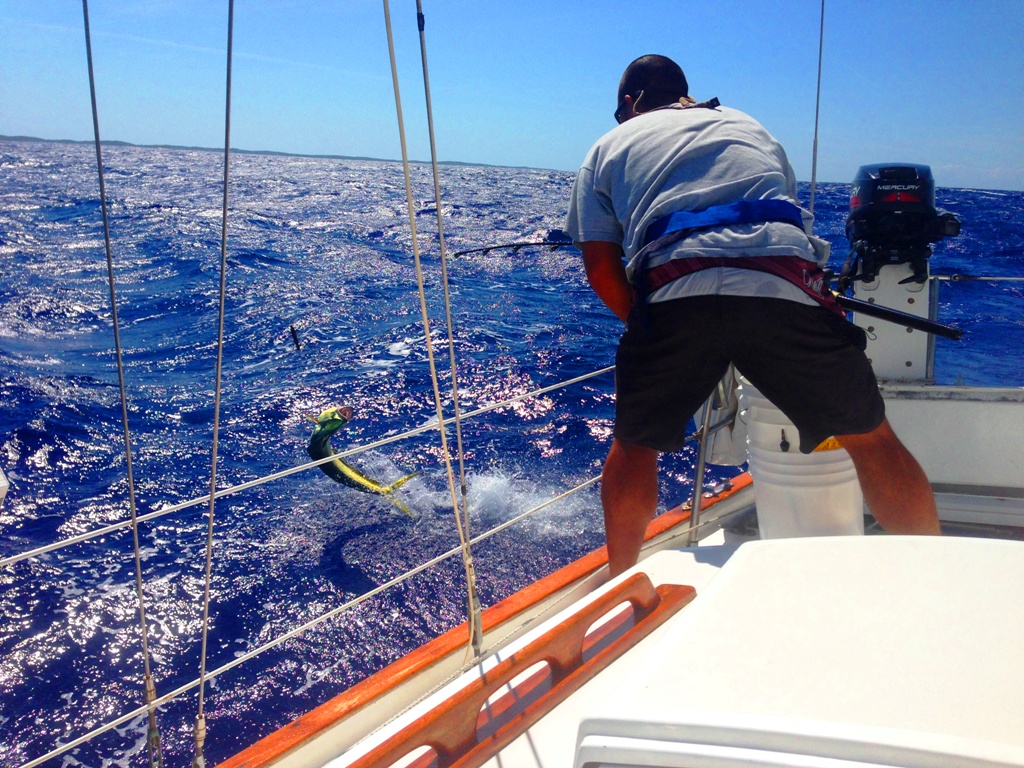 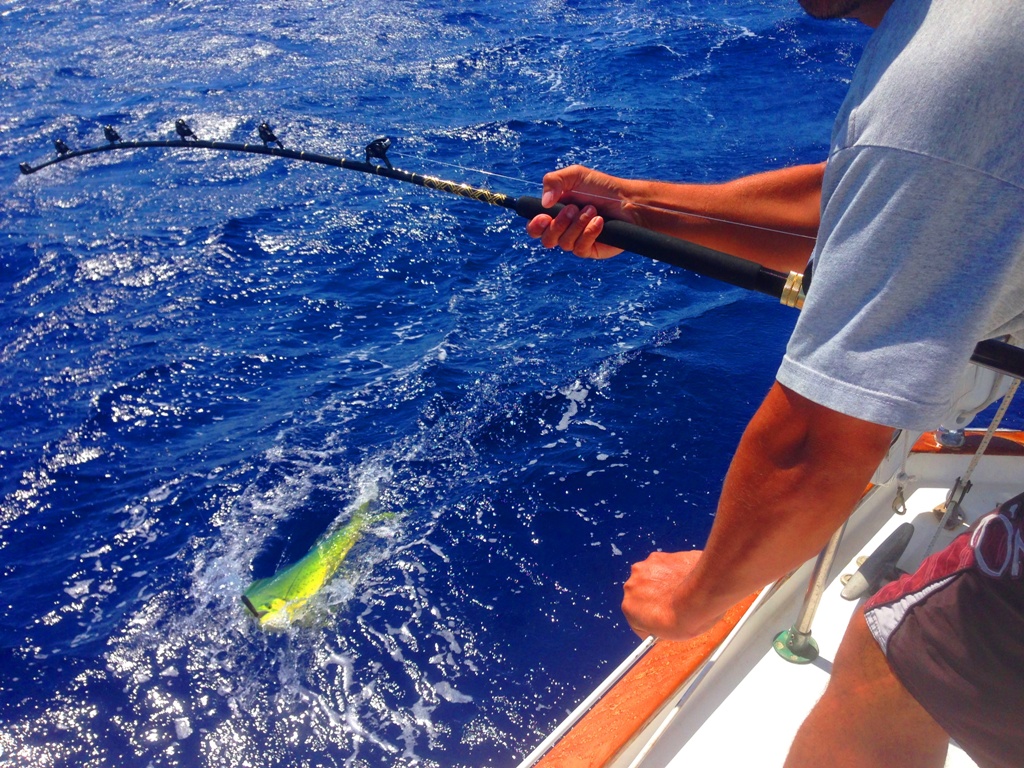 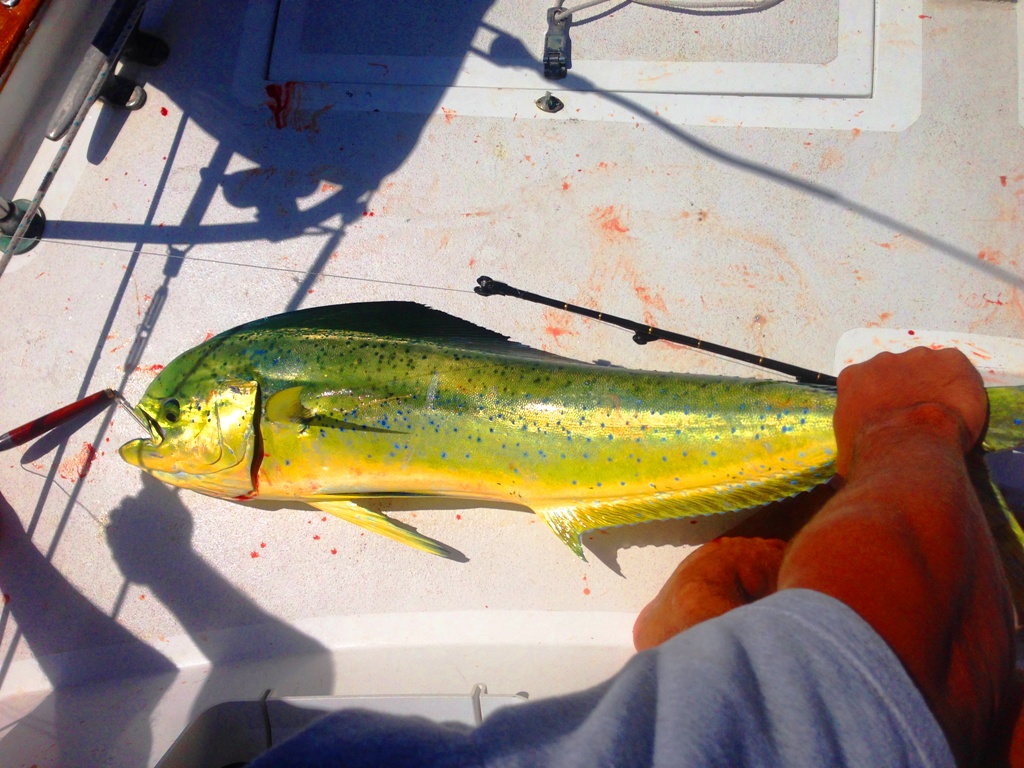 That night as the sun went down, we pulled further and further away from Long Island towards the Crooked Islands. The swell grew and the waves rose from 5′ to 8-10′. Eyeballing the steering was no longer an option as darkness engulfed the boat. I couldn’t see the waves sweep underneath us anymore which meant we had to rely strictly on our instruments and feeling the waves. At 5′ it was hard to “feel” our way downwind. Luckily, our course happened to be dead on downwind all night long.

We slept in shifts, sometimes two hours and sometimes three. We held our shift until we couldn’t stay awake anymore. Staring at a chartplotter in the dark is a little like driving on a lonely county road at night. Boredom sets in and it becomes hard to see with tired eyes.

As the sun came up the next morning the seas were much calmer. The gentle rolling of the ocean surface rocked us slowly. The weather was perfect with moderate winds and sunshine on our shoulders. All three sails went up and we made great time. We were just far enough away from our buddy boat SV Krow to not be able to see anyone or anything all around us. The overwhelming feeling of peace and serenity set in. The wind filled our sails and the sun kissed our faces. Mary Christine glided through the waves effortlessly and silently. All that could be heard was the cool ocean spray refracting off the bow. The water was a rich blue, so crisp and powerful.

The coast of West Caicos grew closer. Our friends on SV Krow took the northern cut to Provo. We anchored in solitude tucked inside the Southwest Reefs. The exhaustion of the completed passage wore on and we were fast asleep for a few hours of rest before continuing on to the Dominican Republic later that evening. 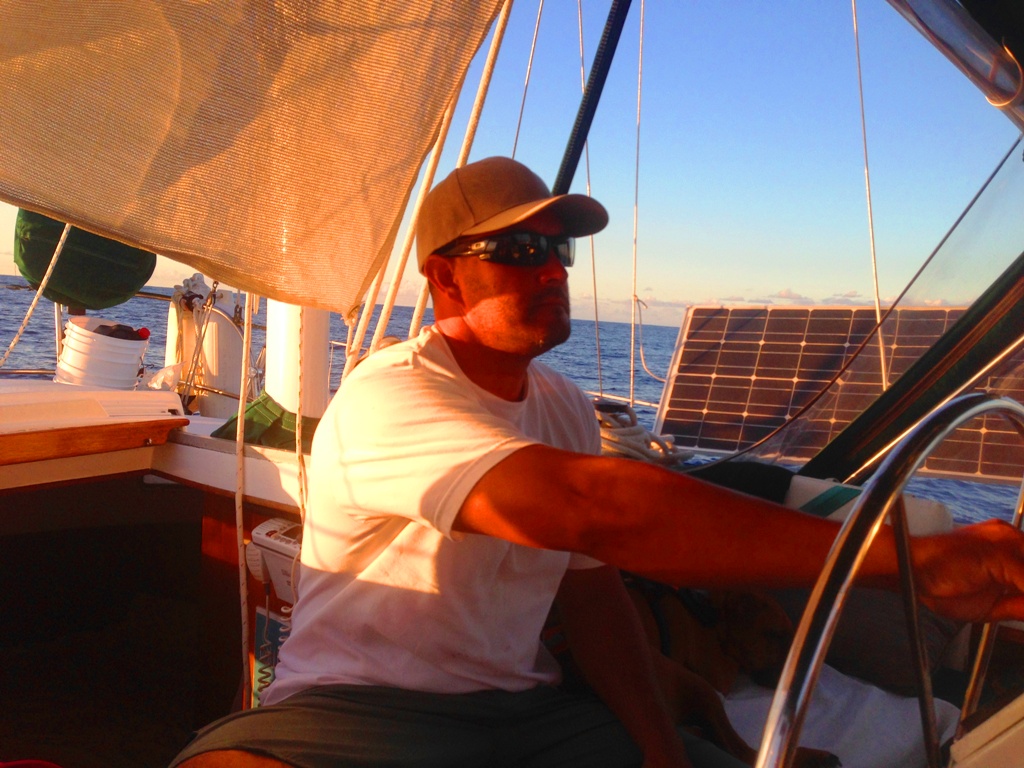 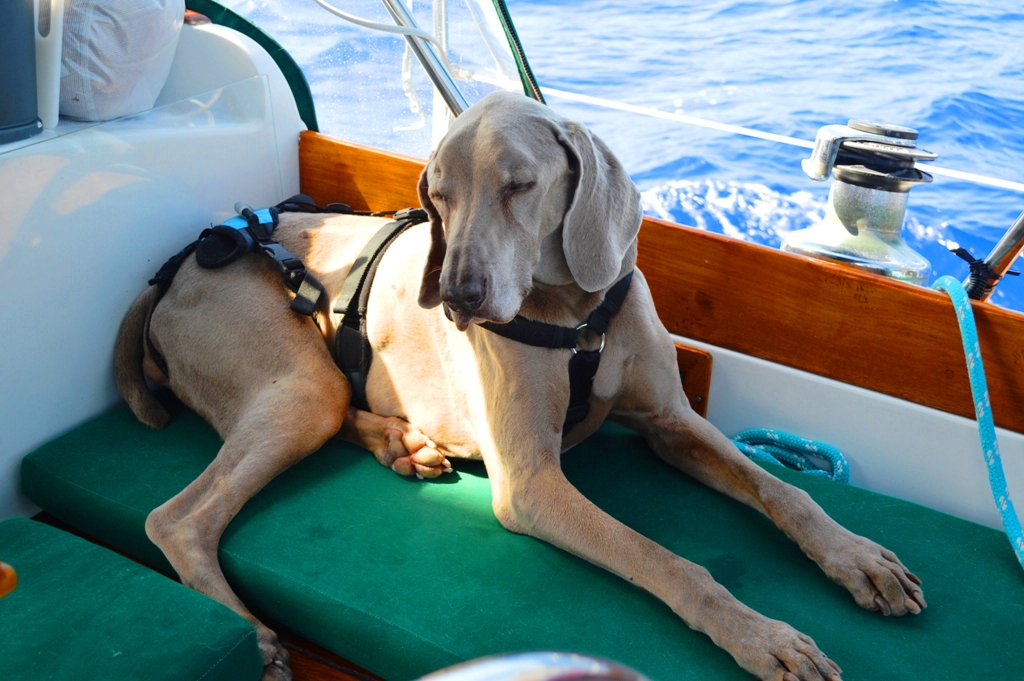 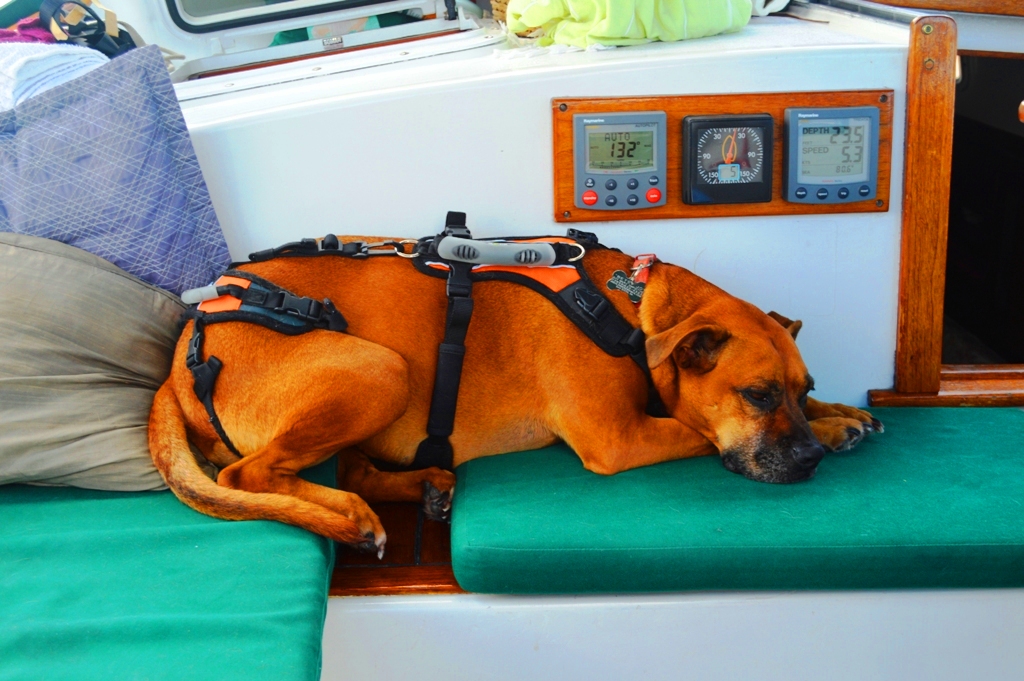 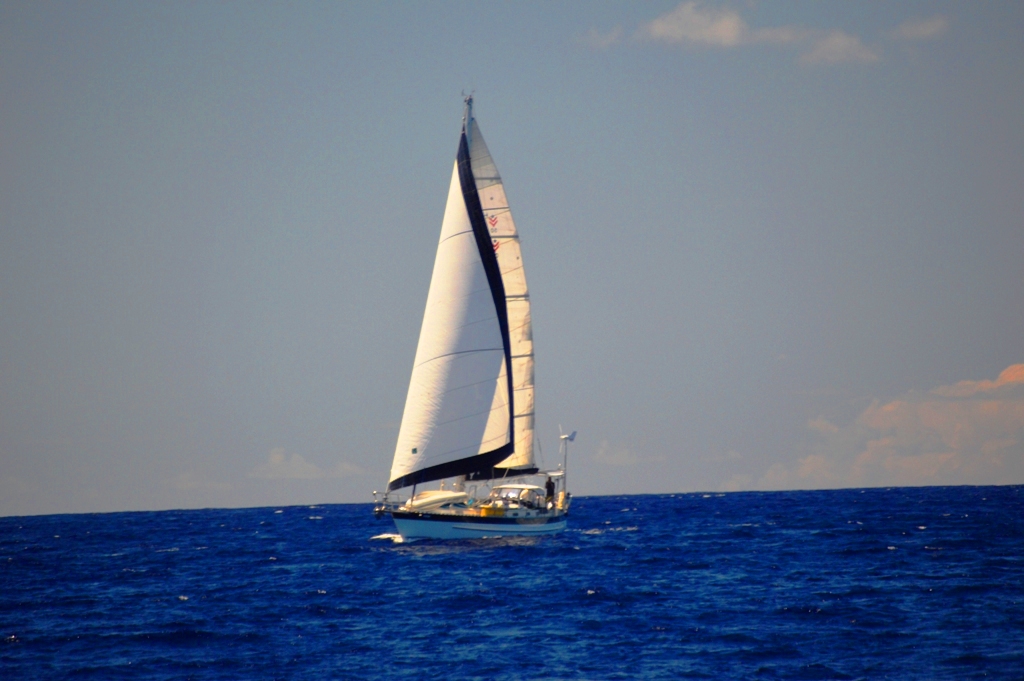 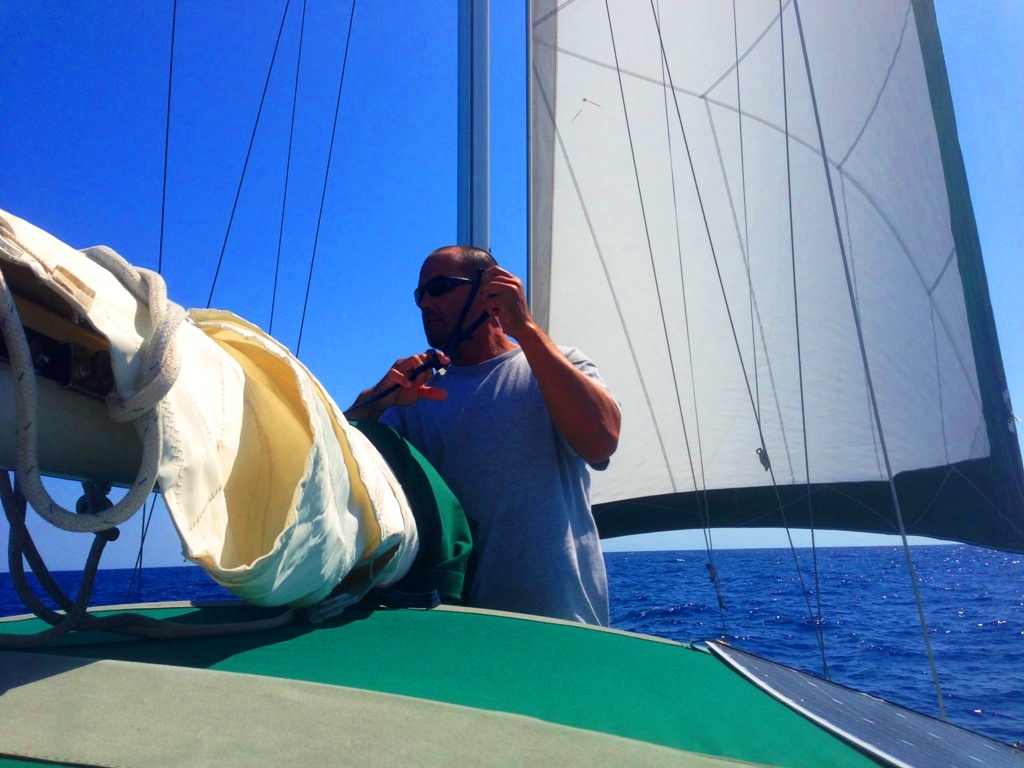 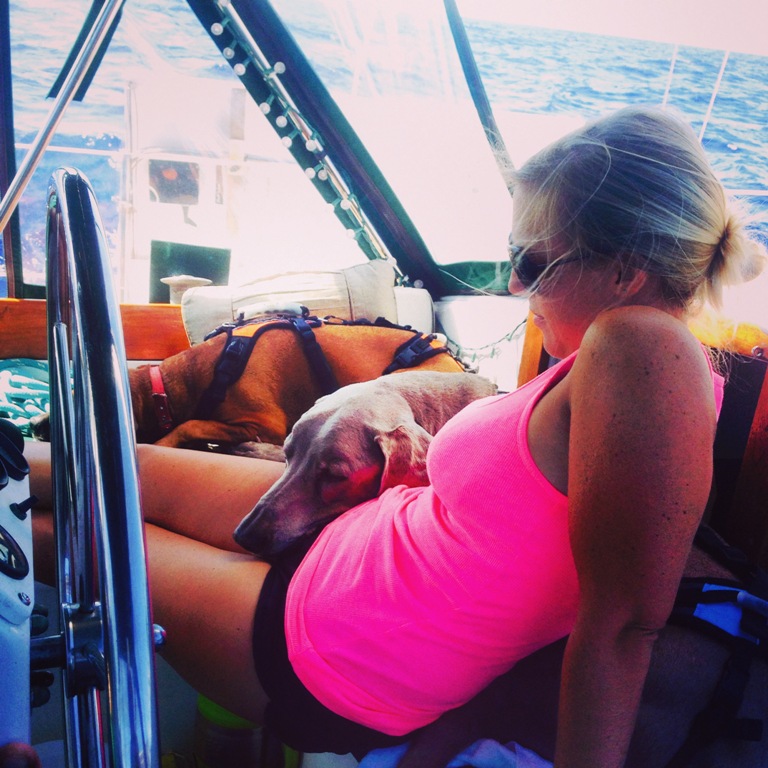 There is something so incredibly enchanting about being on a boat in the middle of an ocean. It was just Peter and I out there, free from all the troubles and worries back on land, free from rules and free from the standards of society as we know it. There is so much more out there to discover and experience. The world is a beautiful place and what better time in our lives to feel the joy that sailing off into the sunset brings us!! Dreams really do come true!!